Newsletter
Sign Up today for our FREE Newsletter and get the latest articles and news delivered right to your inbox.
Home
Muscle Mustangs & Fast Fords
Events 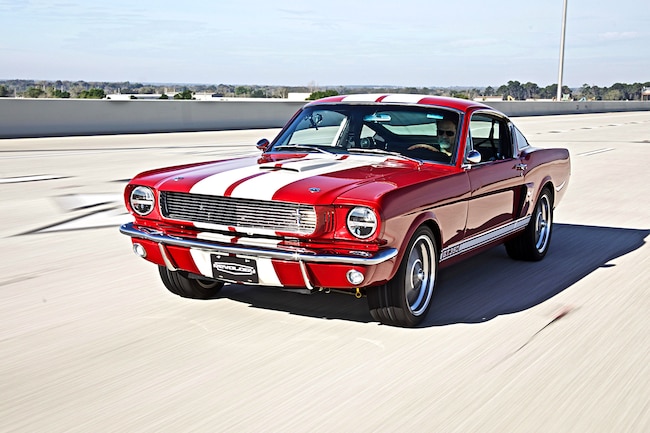 The adage explains that those who cannot remember the past are condemned to repeat it, as if that’s a bad thing. In fact, it is possible to only remember the good parts — and even improve on them as you repeat them. That’s just what Tom Scarpello, founder and Chief Revologist, set out to do with Revology Cars and its line of reproduction pony cars.

In about five years, Tom and his ever-growing team have brought forth his vision of building a classic Mustang the way Ford itself might in the modern era. Ford fans know he spent several years marketing the Ford Special Vehicle Team’s offerings, and he also worked at other automotive companies on the manufacturing side. Along the way, Tom gathered knowledge that he and his team have applied to the creation of reproduction Mustangs that deliver that classic Mustang look and experience with modern features and powertrains.

“We have delivered 29 cars so far, and we recently took our 50th car order, which is pretty exciting,” Tom added.

Through the company’s meteoric rise from concept to carmaker, the Revology team continued to hone its methodology. They are building all new cars using a mix of reproduction gear, modern OEM parts, and custom-crafted details. These vehicles are not simply assembled. Each aspect of the car is tweaked to deliver the best fit and performance. That level of workmanship doesn’t come cheaply, as these vehicles retail for deep six figures, but as you start to peel back all the logistical layers, it isn’t difficult to ascertain that replicating this fastidious attention to detail would be challenging, especially if it hasn’t been your sole focus for the half a decade.

“If you are going to spend $200,000 on a car like this, you should be buying it from us,” he said without hesitation…I like to say that we are building these cars for the next 50 years.”

Your author visited the company shortly after it opened to experience the earliest iterations of these replica Mustangs, and has visited periodically over the years to see them progress and improve. So, when Tom dropped a line and offered the opportunity to drive one of its latest machines, it didn’t take long for us to show up at the Revology HQ in Orlando, Florida.

“With this car we really went back to the roots and really tried to keep it as close as possible to the original Shelby design. But, there are still some details that sharp-eyed viewers are obviously going to notice,” Tom said of this reproduction 1966 Shelby GT350 slathered in gorgeous Candy Apple Red.

He tossed us the keys and we jumped into the driver seat. After quickly adjusting the power seat and buckling up, we immediately noticed a not-so-subtle difference about the latest Revology Mustang. Swinging the door shut, it closed with a tight, confident thump — just like a quality modern vehicle.

It’s the kind of little detail that the OEMs spend countless hours on, and a signal of just how well these cars are put together. In fact, there are the variations of sound deadeners deployed throughout the car to attenuate out the negative noises numbers in the double digits, and one Revology team member is tasked with seeking and eliminating any squeaks and rattles before the cars are delivered.

“Use of current OEM hardware allows us to increase the functionality of the car. It’s not just making it faster, making it handle better, and making it stop faster,” Tom explained. “Obviously all those things are important, but it’s about making the doors shut better and tighter, and just giving you a solid car.”

As we fumbled for the keys to start the car, Tom reminded that this classic Mustang has push-button start (and nearly every other creature comfort you can imagine), so we pushed in the light clutch and smashed the fun button. The modern 5.0-liter rumbled to life as its symphony of horsepower cascaded from the Revology-spec Borla stainless exhaust.

Driving away with both hands on the large steering wheel, the effort was light and quite responsive, but it took a minute to adjust from smaller modern wheel actuation. In due time we were on a curvy back round, and the car handled adeptly and flatly in the twisties, and its taut yet compliant suspension deftly gobbled up road imperfections. If you have ever driven an original classic pony car, you know this isn’t a typical experience, and speaks to the efforts the Revology team put into developing details like the spring rate in a computer before applying it successfully in the real world. Another successful application was the primary reason for our visit — the Gen 3 Coyote 5.0-liter under the hood.

“We were really heavy into the Gen 3 as soon as the crate engine became available,” Tom enthused.

In fact, the company ordered five of the Ford Performance crate engines and Control Pack computer/wiring setups as soon as they were available. While dimensionally similar to its predecessors, the latest 5.0-liter engine features numerous detail improvements, not the least of which is a dual-fuel system that uses both port and direct injectors. This meant Revology had to tweak its vehicle setup to accommodate the 460-horsepower crate engine.

“While the engine may seem to be evolutionary, there is actually quite a lot about it that is new,” Tom explained. “…We did have to do a new fuel delivery system. It uses a return system and we had previously been running a returnless system.”

As such, the company is one of the first we know of, outside of Ford itself, to deploy the Gen 3 Coyote in a production vehicle. The result is, well, a heck of a lot of fun. Imagine the power of a modern Mustang in a lighter chassis with a classic feel. It moves out smoothly, makes all the right noises, and revs to 7,000 rpm without the compromises a pushrod small-block would need to reach those heights, and the car puts that power down to the pavement confidently.

“That power in this light chassis means the power-to-weight ratio is pretty impressive,” Tom said. “…It’s actually slightly better than a Ferrari F430. It will surprise a lot of people at stoplights and around corners as well.”

After snapping photos of the car, we swapped seats and let Tom drive the car and tell us more about its features, but we couldn’t help being struck by how cool it was to be driving an “old” Mustang that felt so new. The juxtaposition is jarring in the best of ways. Revology took a history lesson, improved the story and the results are impressive. It is unlikely, however, that we have seen the best version of these cars yet, as we have a feeling that Revology Cars isn’t done refining its dream cars. For now this Shelby GT350 is the pinnacle, and one that we wouldn’t mind driving over and over again.

Combine classic styling with modern performance and driveability and you get a Revology Cars reproduction Mustang. This 1966 Shelby GT350 is officially licensed and powered by the latest Ford Performance Gen 3 Coyote 5.0-liter engine, which is backed by a Tremec six-speed manual transmission and an 8.8-inch rearend.
Built with a modern coachbuilder’s attention to detail, this car looks like a pristine 1966 Shelby GT350, but it drives like a far more modern machine. The Revology team checks the fit and finish at each stage of the build to ensure the panels are smooth and the gaps are even.
At the heart of the latest Revology replicas is one of the first production applications of Ford Performance’s 460-horsepower, 420 lb-ft Gen 3 Coyote crate engine and control pack. Nestled in the 1966-style body and supported by a new return-style fuel system, the high-winding 5.0-liter provides ample thrust. Right now the Gen 3 is only available paired with a Tremec six-speed manual, but an automatic version will eventually hit the order sheet. Until then automatic fans must order the Gen 2 Coyote engine.
The vehicle we drove handled superbly with the base suspension package that includes a double wishbone up front and a three-link with torque arm and Panhard rod in back. If you opt for the Pro Touring package and bigger AP brakes, you receive a Detroit Speed Alumaframe front suspension, a diff cooler, and more.
These replicas are ordered much like new vehicles, from a list of specific options. However, one area with the greatest flexibility is the interior. Revology does its upholstery in-house using top-tier OEM materials, so buyers can select from a variety of materials and colors. No matter what options selected, the interior panels are covered and finished like a high-end vehicle, not like a ’60s Mustang.
That’s right, the redline is definitely set at 7,000 rpm. The modern Coyote engine pulls that high with ease, and feels oh so good doing it.

Photography by Steve Turner and courtesy of Revology Cars