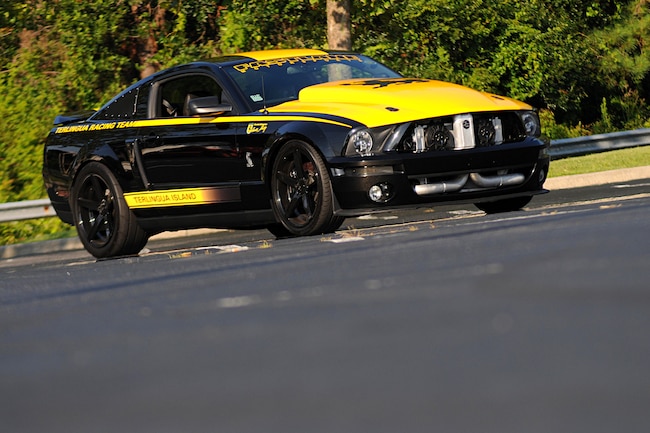 This story begins long before there were Mustangs or anything else called a muscle car. Then, the only creatures fit for otherworldly consumption were called hot rods and hot rods needed a signature, a voice, a growl, an undeniable intent. Sound amplified. A siren. And nothing less. The mufflers were the medium, filled with fiberglass or steel packs, and sometimes there were no mufflers at all.

Regardless of origin (ostensibly California) or the stuff inside them, these canisters were known universally as Hollywood mufflers. And in the likely event there was no exciting engine work, these tubes made it sound like there was, marking territory and shouting that the car was unlike the others in town.

The 2008 Terlingua sports a hybrid coating: part paint, part graphics. Fastlane stacked a lot of stuff behind the grille. Owner Jerome Gardner completed the pastiche with 20-inch rollers and a come-get-me stance.

Ratchet forward fifty years: badass mufflers haven’t cut it for decades. You need oats under that hood and for some people that means a ton of ‘em. Jerome Gardner hails from Fuquay-Varina, deep within North Carolina and is under the constant drip of horsepower. He was well aware of the imminent hurricane swirling in the Four-Valve combustion chambers of the late-model Mustang. He was passionate. He found a 2008 Shelby Terlingua and jumped headlong from there. He was interested in function. He wouldn’t be spending labor or cash on creature comforts or any other stuff that would slow the car down, and he wanted it to handle as well it ran.

Though the Shelby’s livery looks complicated, it’s just graphics over the original black, but memorable nonetheless. The car was originally modified by Terlingua Racing Team (under the Shelby aegis). Once Bobby Starks Paint and Body detailed and restored the black base, the vinyl was re-applied by Panda Graphix (Clayton, North Carolina). At this point, Jerome handed the pile to Andrew Watson and Caleb Skinner at Fastlane Motorsports in Benson, North Carolina, for the engine work as well as the recalibrated suspension. Since operating temps would likely increase with the hot, new engine combo, the Fastlane cats deemed a 4-inch cowl VFN fiberglass hood indispensible.

While the motor was awaiting anointment, Fastlane addressed the chassis complete, adapting a BMR K-member and control arms and proceeding with Steeda’s bump-steer fix and coilover suspension. They took up the back end, strengthening the 8.8 with Moser axles, but retaining the original 3.31:1 gear set and the Detroit Truetrac differential. They replaced the factory control arms with adjustables and heavy-duty mounts, tied the ends of the car together with up BMR subframe connectors and bolted Steeda coilover shocks in the sockets.

Since the load had more than 50K miles on it, Fastlane gave the bore a clean-up poke, increasing displacement to 334 cubic inches. Mel built the short-block with a Cobra Jet crankshaft, Oliver billet connecting rods and Diamond pistons with heat coating and upgraded pins. To accommodate the big boost, he held the compression ratio at 9:1. He deburred the block and honed-fit the pistons to it, file-fit the Total Seal AP rings packs and balanced the crank to (plus/minus) .05 grams. He closed up the bottom with a 2014 GT500 pan and windage tray over a Melling billet oil pump.

The GT’s voluminous cylinder heads are the key to the kingdom: free-flowing, great lines of trajectory and camshafts on top of the cylinder heads. Mel enhanced them by race-prepping the intake and exhaust ports, installing bronze valve guides, performing a triple-angle valve job and fixing the seats commensurate. He set them up with L&M springs and titanium retainers. Valves are controlled by L&M camshafts featuring 0.046/0.046-inch lift and 239/247 degrees duration at 0.050.

This one-off installation featuring yards of handcrafted ducting, a couple of Precision turbochargers and a Kenne-Bell Big Gun air-to-liquid aftercooler. Fastlane’s Caleb Skinner pulled an easy 1,240 horsepower out of it.

Fabricated ducting and coolant tanks give the motor a no-screwing-around attitude. Skinner and Watson built all that stuff to create a custom application with 67mm Precision turbochargers, 46mm Precision wastegates, a 50mm Tial blow-off valve and an AEM boost controller. According to Caleb, “When the customer brought this one-of-a-kind Shelby to Fastlane, he wanted a one-of-a-kind turbo kit that was street-friendly yet guaranteed to make at least 1,200 horsepower. After a few conversations, we chose a rowdy through the front bumper design. The package blows through a Kenne Bell Big Gun air-to-water heat exchanger and is managed by four fans. Fuel delivery and engine management for this animal include ID 1300 jets, three Fore 465 pumps, a Fore F4i regulator, FRPP Super Cobra Jet throttle-body and SCT BA5000 custom oval housing. Nasty waste is drawn from the cylinders by custom header stands and a 3-inch system plumbed with Kooks mufflers…not Hollywood. Caleb Skinner tuned the critter fine: 1,240 horsepower at 26psi boost.

Interior is well-equipped and ergonomically correct. Jerome often drives with one hand on the Barton shifter and the other holding his hat.

All that guff is assimilated by a McLeod RXT clutch assembly and aluminum flywheel slinging torque to the Magnum T56 and the Driveshaft Shop prop shaft. Jerome whacks a Barton shifter.

Jerome: “Not only does the Mustang turn heads at every corner, it also spins the tires at over 100 mph. It runs and drives like stock…until the turbos spool and then you better hold your hat.” Don’t you love it when that happens? 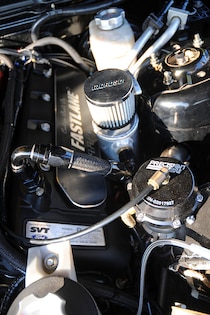 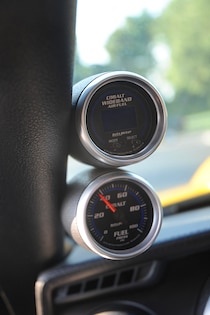 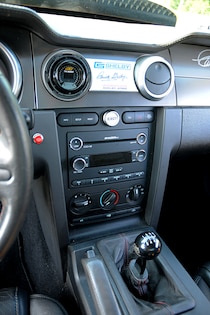 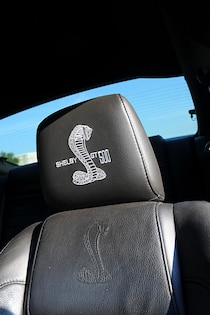 Mike Becker bought this 2008 Mustang GT Premium bone stock and has modified it into one hell of a daily driver.