Once bitten, twice as fly 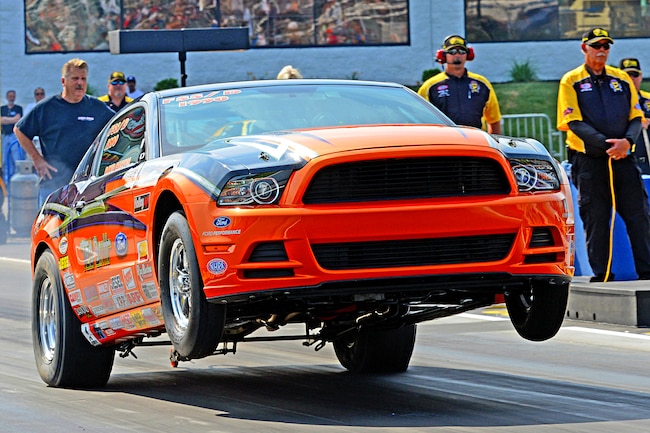 When a couple of 70+ year old guys are the talk of the weekend at a NHRA national event, people want to know what’s up with that – and why. That was the case with Roger and Eddie Cook recently when their winning FR500CJ was the quickest car in its class at the NHRA Virginia Nationals.

“Ford Racing approached us originally about doing the car,” Roger said. “Some people said we’d never be able to do it because we’d been out of racing for twenty-five years, but we did a lot of research and hard work – and won the NMRA Cobra Jet Shootout in the car’s first race!”

Ray Barton Racing Engines assembled this Windsor-based 429 with a Callies crank and rod assembly with Diamond 14.9:1 piston. Ford M6049-D-3 NASCAR High Port heads make up the top end of the engines with a FRRP M-9424-CJN intake, 1,600 cfm throttle-body and 80 lb/hr injectors. Joel’s on Joy built the C4 automatic with a, ATI 5,700 stall converter.
Roger (left) and Eddie Cook with driver and defending Factory Stock Shootout champion David Barton (right) were low qualifiers out of a field of 52 entries at the NHRA Virginia Nationals. The Cook brothers have won several NHRA national events as well as a NMRA Cobra Jet Shootout with other drivers and continue to be one of the most watched late-model Mustangs in NHRA circles.

Introduced in late 2008, the FR500CJ was the second of a short series of serialized, factory-built racer cars sold through Ford dealers. Like the FR500S before it, these were built to commemorate iconic racers from the sixties. True to the 1968 Cobra Jet, only 50 of the 2008 FR500CJ Mustangs were built. They were all sold within just ten days.

The car’s debut was nothing short of extraordinary at the 2009 NHRA Winternationals. Dressed in the same livery as Al Joniec’s Rice-Holman Cobra Jet from 1968, fans saw history repeat itself as John Calvert won the event in the car’s debut just as Joniec forty-one years earlier.

Unfortunately, few FR500CJ’s ever found their way onto the race track as collectors snatched them up to preserve. Ford, of course, wanted to see these cars on the track. Knowing their legacy from the early days of Pro Stock, Ford Racing approached the Cook brothers in late 2010 about building and racing a Cobra Jet, which they eagerly accepted. In January of the following year, they came back from Detroit with a body-in-white and started their build.

“We’d never worked with Ken before, but had known him a long time,” Roger continued. “He’s a hands-on guy. There’s been a lot of stuff done to that car that you don’t see. You can’t really see it, but the unibody was stitch welded every two inches to make the body more rigid. That’s one reason why the car has been so good from day one.”

Running in NHRA’s Factory Stock Showdown/D category with a weight break of 6.5-6.99 pounds per cubic inch, racers in this category run off of a 9.90 elapsed time index in the quarter-mile. With defending champ David Barton behind the wheel, the Cook Brothers have already run a best time of 8.802 seconds in 2018.

With the rolling chassis complete, the car was then disassembled and delivered to Jesse Pritchard of J&J Custom Painting in Mechanicsville, Maryland. Covered inside, out, and underneath in Tangelo Orange, the car turns heads with painted graphics in black, green, blue and purple that would rival any car show winner.

With a full interior (and even a back seat!), everything looks amazingly stock for an 8-second drag car. Recaro front seats provide comfort and support with the 10-point 8.50-certified roll cage. Auto Meter gauges compliment the stock dash while a Precision Kwik Shift II shifter occupies the center console.

Originally debuted with a Windsor based 428 naturally aspirated engine, the car won Best Appearing at the 2012 NHRA Gatornationals and captured the 2012 NMRA Cobra Jet Showdown event with Robbie Hudlow behind the wheel. The following year saw the car win its first national event in Stock eliminator at Maple Grove with Sal Biondo driving.

The Cook brothers later updated the car to 2014 Cobra Jet specs and switched to a 429 combination from Ray Barton Racing Engines in Robesonia, Pennsylvania. Another national event victory came that year with Biondo at Norwalk in 2014. Subsequent drivers included Jimmy Ronzello, Peter Biondo and others along with a NHRA points race in 2017.

“Ford told us they’d like to see the car updated to a 2014 model, which involved changing out the front/rear fascia, hood, grille, headlights and taillights,” Roger revealed. “They also talked to Bo Butner and us about going with the 429. There was a lot of work involved, not just changing the engine combination, but it was hard to say no.”

With defending Factory Stock Showdown champ David Barton at the wheel of the car in 2018, the team ran an impressive 8.802 at the season opener which was 1.098 seconds under the FSS/D class index. Two months later, they were low qualifier in over a field of 52 Super Stock entries at the Virginia Nationals.

“What started out as just boxes of parts has turned out pretty well,” Roger said in closing. “After Ken Keir put the cage in it, we basically finished the car ourselves. Ford seemed to like it and has given it a lot of publicity.”

With exceptionally clean craftsmanship throughout, it continues to add to the Cobra Jet legacy. 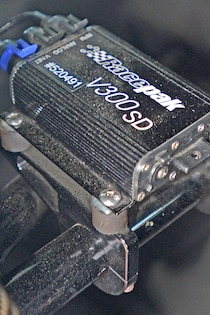 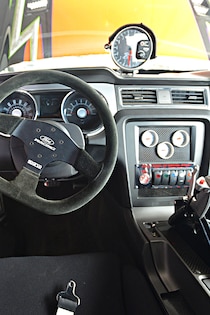 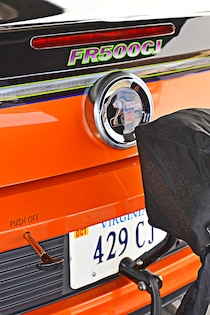 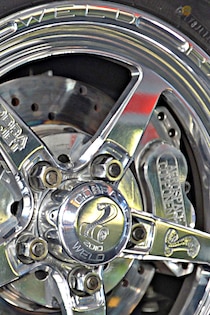 Readers share the story and pictures of their muscle mustangs and fast fords. Big Power With a 2014 Roush Stage 3.