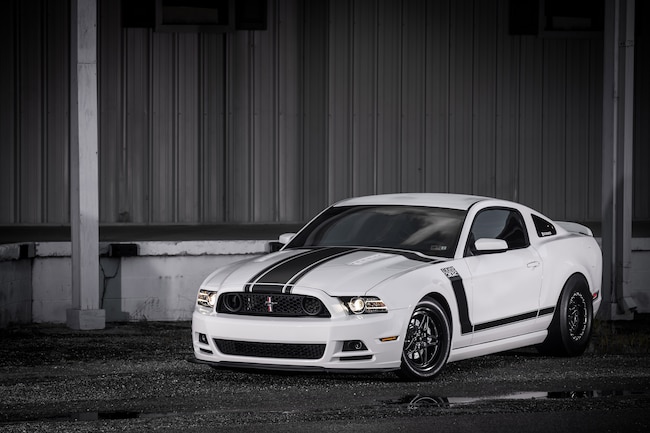 The hot rodding community coined the phrase “sleeper” sometime back in the ‘60s, describing a car that ran a lot quicker than it looked. Today there are varying degrees of sleepers, on one end of the spectrum there are the jalopies complete with rust falling off and eye sore appearance. Then there is the stark contrast of the hunk of junk appearance, the sleeper that looks more like a hard parking poser than a car that has the potential dust most would-be competitors. It is the latter of the two modern sleeper appearances that Sterling Hall’s 2013 Mustang Boss 302 fits—clean looks to clean your clocks on the dragstrip.

Boasting time slips in the low 10s, with a best of 10.12 at 144 mph while power-shifting the gears of a Getrag MT-82 six-speed transmission, Sterling’s S197 Mustang isn’t one that you want to take lightly. The car was built with subtlety in mind, more because the modern Boss 302 is a badass than because Sterling wanted a sleeper.

Drawn to its style and bitten by the speed bug through having enjoyed eight different Mustangs, including three Terminator Cobras, Sterling instantly liked Ford’s new version of the Boss 302 with its more powerful Coyote 5.0. “I’ve always been a Mustang guy, ever since I was kid and couldn’t even reach the door handle of my dad’s 1973 Mustang Mach 1,” he says with the Boss 302 being his fourth Mustang.

Sterling Hall is a veteran and he was quick to point out the support that many companies offer for people in the military. He wanted to give a special thanks to Brad’s Performance and Repair, Belak Industries, CM Concepts, Viking Performance, BMR, CPR Turbo Kits, Andy Howard, Fore Innovations, Aerospace Components, Revolution Automotive, UPR, and Lethal Shutter Productions.

He picked this 2013 model a few years ago and the car got progressively quicker in that time. “I didn’t even have the car a month when I brought it the track,” Sterling admits. He added a set of 19-inch drag radials and a line lock, which helped yield runs 12-oh timeslips and left him wanting more.

The timing couldn’t have been more perfect, a friend was de-modifying his Boss 302 and Sterling picked up long-tube headers and a host of other bolt-on parts for a great price. The Boss 302 became more fun, much louder, and even quicker but Sterling had to park it when he was deployed overseas through the West Virginia Air National Guard. He spent his days working for Uncle Sam and daydreaming of his Mustang at night. The planning worked in his favor, Sterling picked up a Forced Inductions 82mm turbo from a friend who was upgrading upon his return stateside.

Admittedly, Sterling had always wanted to do a turbo setup on one of his Terminators but never pulled the trigger on it. With a price too good to pass, he didn’t waste the opportunity to get the boost maker before the deal went away. A CPR turbo kit was procured so the turbo could be properly mounted on the front of the engine. Continuing with the understated theme, Sterling opted for the blacked out air-to-air intercooler to make it harder to see when sitting behind the lower valence. The only other major modification to the engine was the addition of a set of Triangle Speed Shop oil pump gears and crank sprocket along with an ATI balancer.

Knowing that the turbo was the first step in a long journey to seeking 9-second timeslips, Sterling went overkill on the fuel system. In addition to a larger feed line, a set of Injector Dynamics 1300cc fuel injectors combine with three 465lph fuel pumps to supply E85 fuel to the boost-loving Roadrunner engine. Brad’s Performance and Repair is responsible for the building the car while Adam Browne of Revolution Automotive handled the PCM calibration.

Power is nothing without grip on the dragstrip and the factory suspension parts were quickly discarded in favor of tried and true aftermarket offerings. The Mickey Thompson 28x10.5-inch ET Drag slicks are jammed into the tarmac by a set of Steeda upper and lower control arms. Other vital rear suspension components include Viking Crusader adjustable shocks with BMR drag springs and a anti-roll bar.

Moving to the front—it is lighter thanks to a BMR/CPR K-member kit and a lightweight front bumper support. The factory shocks are in place but the drag springs help hike up the front nose during aggressive acceleration. Slowing the Boss down is the job of Aerospace Components Pro Street brakes. The brake upgrade happens to be the only external hint that there is something serious with this Boss 302 when its in street trim with the 19-inch street wheels on. Race trim consists of Belak lightweight wheels—those are 17-inch front-runners with M&H tires and the back are 15-inch diameter hoops with beadlocks to hold the Mickey Thompson slicks in place.

Sterling has no problems handling a shifter in his right hand. He’s run a best of 10.12 at 144 mph while power-shifting a Ben Calimer modified Getrag MT-82 six-speed.

“I wanted to run in the 9s with the MT-82,” Sterling explains of his goal. At the time of the photo shoot the Boss employed one that was rebuilt by Ben Calimer. The built Calimer MT-82, which features a McLeod RST clutch, did help Sterling run bottom 10s with reliability. However, shortly after our photo shoot someone just had to have the transmission immediately. Sterling decided to take the cash and roll it into a Powerglide that came from his buddy Andy Howard’s S197 Mustang. As he puts it, there isn’t a bottomless bank account to just keep throwing parts at the car, so the timing with the swap over to an automatic was perfect.

With the Powerglide getting installed in the near future, Sterling has his sites set on the single digits on the relatively low boost setting of 12-14 psi. After all, the engine is still mostly stock despite making 850rwhp through the MT-82. Down the road plans call for a fortified Coyote engine and a 10-point roll cage to make it legal for single-digit performances. Then it is time to crank up the boost and drop his goal down to the 8-second zone. “I just want to keep going quicker,” he concludes.

At that point, the innocent sleeper look of Sterling’s Boss 302 will have gone away and the world will know he isn’t there to just wax his car and shine the wheels.

The interior is a continuation of the subtle theme as it is void of big gauges or other telltale signs of the 850rwhp combination sitting under the hood. The only major modification was a CM Concepts rear seat delete. 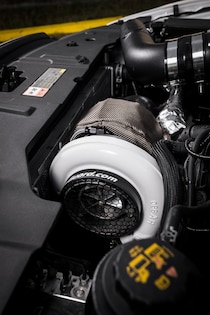 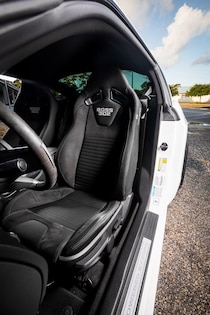