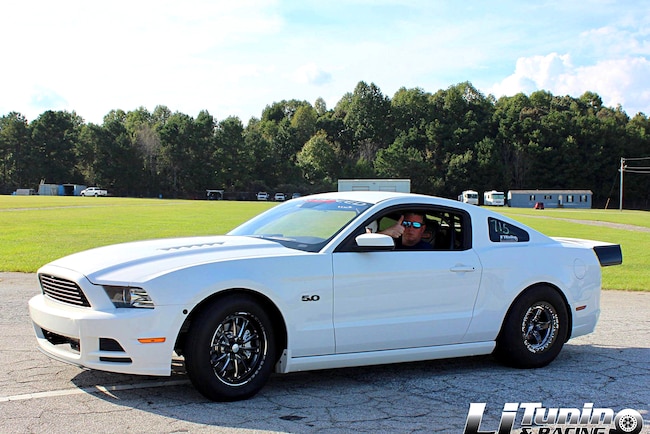 This 2013 Mustang GT recently won Street Car Takeover in Atlanta with a personal best 7.87 seconds at 175 mph in the Street Racer class. John Bonner is the co-owner of the car, which was built by Dynospeed Racing. Handling the tune is Sai Li of Li Tuning and Racing. The engine was built by Fast Forward Race Engines, which sleeved and O-ringed the block, and it features Manley internals assembled by MsRacing. Other modifications include ID1700 injectors, Comp/Sai Li turbo cams, a Fore 3-pump system, an air-to-water intercooler, a CPR turbo kit, a Forced Inductions 88mm Borg turbo, Weld wheels, Viking coilovers, UPR suspension, a 10-point cage, Kirkey seats, and a parachute built by London Chassis Dyno. It features a TH400 transmission by Steve Hopkins and makes well over 1,400 rwhp.