Newsletter
Sign Up today for our FREE Newsletter and get the latest articles and news delivered right to your inbox.
Home
Modified Mustangs & Fords
Features 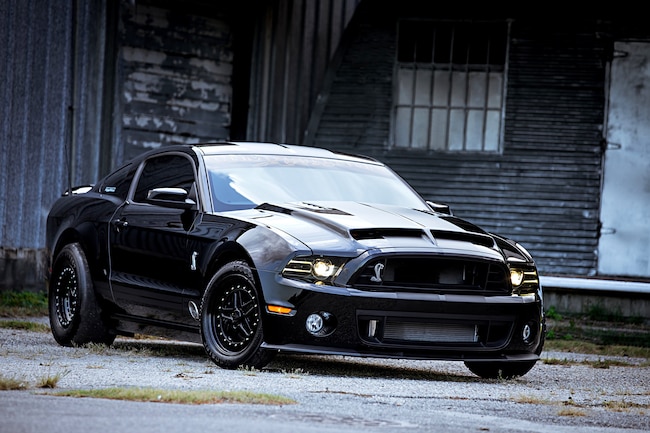 In case you haven’t noticed, there’s a horsepower war going on. Battles are raging between the Big Three automakers in Detroit to skirmishes in the asphalt jungles across the country. One of the leaders in this battle is the Shelby GT500, first in its 500hp iteration that was released in 2007 and proceeding up to the last version in 2014 with 662 hp from the factory. That kind of power is obscene for 99 percent of the public, but it’s just the beginning for the one-percenters of the world. Jason Ragan is part of that exclusive club. His 2013 Shelby GT500 now makes nearly double its original horsepower output.

Ragan, who now resides in Pensicola, Florida, is an active member of the United States Air Force. He was drawn to the GT500 after building up a 2010 Mustang GT and falling short of his 600-rwhp goal. As fun as the 4.6L and Three-valve per cylinder combination was with a supercharger, it just wasn’t going to satisfy the combat veteran. He sold off the 2010 model and grabbed a GT500 as a replacement and the path to a twin turbocharged setup began.

Home base at that time for Ragan was North Carolina, and that’s where he struck up a friendship with Carl Messenger of Competition Auto. Ragan was comfortable letting the Spring Lake, North Carolina, performance shop work on his cars—after all, Competition Auto has built exceptional vehicles for its customers and uses an eye-popping S197 Shelby GT500 that runs low 7s at 200 mph to show off its capabilities. If Messenger and his crew can go fast and look good doing it with 2,000 hp, then building street cars with half that power should be child’s play.

“Average people can’t just build a racecar all at once,” says Ragan. So he did what most others do: completed small projects each year. “I have been deployed 11 times, so when I’m gone I save up some money and then come home and do stuff to the car.” The projects began simply with minor bolt-on parts like a pulley, a tune, and a cold-air intake kit. But each passing deployment the level of intensity increased, but Competition Auto handled each build with ease.

The bolt-on fun quickly faded. Messenger explains, “Jason wanted a four-digit street.” [That’s 1,000-plus rwhp.—Ed.]. After running low 6s in the eighth-mile, Ragan’s goal was to have a solid 5-second street car, and having 1,000 rwhp on tap would get him there. The solution was to build a solid long-block and top it off with a massive Whipple 4.0L supercharger.

The factory 5.8L aluminum block was filled with all sorts of goodies like Diamond custom pistons, Oliver connecting rods, and a Cobra Jet crankshaft. The cylinder heads are mildly modified. A quartet of Comp camshafts is bolted to the top and features Competition Auto’s custom specs. Fueling the setup is the job of a Fore Innovations billet drop-in assembly with three fuel pumps and a set of 160-lb/hr fuel injectors. The result was an astounding 1,050 rwhp through the Tremec six-speed manual gearbox. If you are into drag racing then you know the next move. An automatic is almost a requirement at that power level. Messenger and Ragan decided that a street car should use an overdrive transmission, but their options were limited when it came to Ford transmissions. So they did what everyone does and raided the GM parts bin. However, instead of grabbing a Powerglide or TH400 like most others, they opted for a 4L80. The robust late-model overdrive unit was sent to Rossler Transmissions to get rebuilt with a Stage 4 package in order to handle the big power. Switching to the automatic did knock the rear wheel output back to 860 hp, but the car accelerated better and was more consistent.

Another deployment meant another awesome idea for some upgrades. If a little is good then more is most certainly better. This time Ragan left the car at Competition Auto with marching orders to ditch the belt-driven boost maker in favor of twin turbochargers. “There’s a big street scene down here [in Florida] and that’s why I went with the twin turbos,” says Ragan. The factory PCM was discarded in favor of a Holley Dominator EFI, which is also used to control the 4L80 functions.

A custom turbo kit was built for the GT500, and Competition Auto selected a pair of Borg Warner 76mm turbochargers to go on the kit. The factory air-to-water intercooler system is still utilized but it was modified with a larger core and a custom bonnet was bolted where the supercharger is supposed to go. The exhaust is routed out of the engine compartment and dumped to the atmosphere behind the front wheels, much like a Pro Modified setup in the professional drag racing ranks. TBC of Fayetteville, North Carolina, gets the credit for the pro-style exhaust setup.

Power is nothing without control, and for that Competition Auto tapped Strange Engineering for a set of double adjustable front struts and rear shocks, Cobra Jet springs all around, and a set of BMR control arms. The factory 8.8 rear housing has been enhanced for the bigger power and features Strange Engineering spool, 35-spline axles, and 3.55 gears.

Because the GT500 is used for black ops in this horsepower war, it’s only fitting that it be blacked out in every conceivable way. A TruFiber hood is the only body modification, and it was painted black to match the body by DC Auto Body. The wheels are Bogart RT and feature the optional black powdercoating and “bolted” design. Hoosier DOT front-runners wrap the 17x4.5 front wheels, while Mickey Thompson ET Street Radial Pro 275/60R15 drag radials are mounted on the 15x10 rears.

The initial goal of a 5-second street car is long in the review mirror. The twin turbo setup has far greater potential. Ragan is working with Messenger on getting the car sorted out on low boost. Since being stationed in Florida, Ragan goes to the track and data-logs each run, sends the file to Messenger when he gets back to the pits, and then discusses the run on the phone with him before changes are made to the tune file. It is then sent back and Ragan uploads it into the Dominator EFI. He makes another run, starting the process all over again.

The car makes 1,040 rwhp in its current trim, which is roughly 1,250 at the crank, but its on-track performances are classified. The GT500, however, is currently being outfitted with the proper safety gear, at which time the turbochargers will be turned up to 35 psi. Once that happens, Ragan will be ready to go on the offensive as a hunter-killer and eliminate the competition with sub-5-second times and 7-second quarter-mile capabilities. 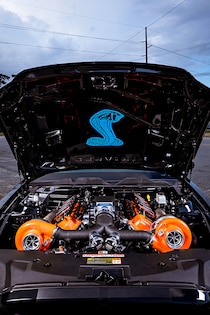 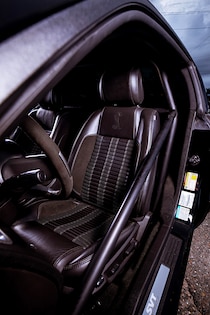 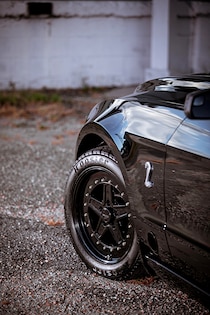 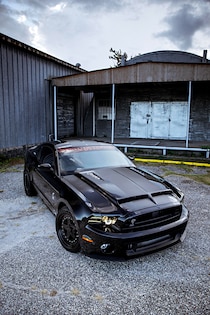