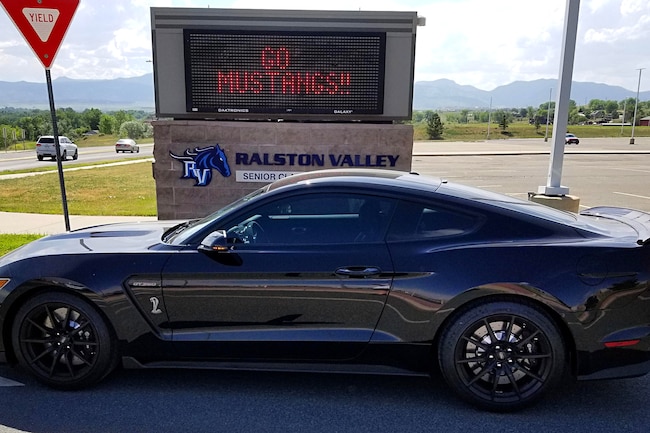 “When I decided to retire a couple of years ago, my lovely wife Jaci told me to look for a new car to celebrate the occasion,” Ed Lippert says. Right after their wedding in 1986 they bought a 1988 T-Bird Turbo Coupe. Later they replaced that with a 1995 SHO, and finally the couple moved on to several Mustangs over the years. “Yes, we are dedicated Ford people,” he adds. Every Ford they’ve owned has featured a manual transmission because both enjoy the automotive interaction a stick car affords. For the retirement present, Ed set his sights on a GT350. He couldn’t get a deal done on a 2017, but when the 2018s came out, he immediately placed an order with Brighton Ford for the 2018 Shelby GT350 seen here. Ed’s black Shelby arrived in December 2017. Since taking delivery he has added matte black stripes, a few chrome items, Rockford Fosgate and JL Audio stereo components, and Redline Tuning hood struts. A K&N intake was added along with a MagnaFlow exhaust system. “At 68 years young I can no longer wring every last bit of performance out of her,” Ed says, “but man, what a kick to drive.”