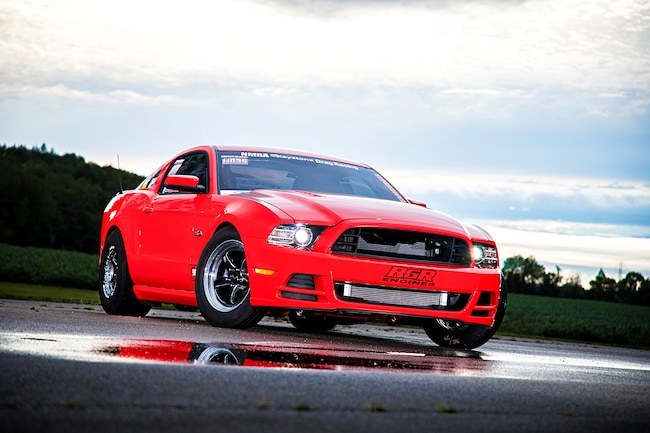 Behind every championship is a strong passion and for Illinois-resident Mike Ciborowski, it has been a smoldering fire within him that dates back to when he was a kid. First as a bracket racer, well, because that is what you did back in those days. The lifelong Ford fanatic got a taste of national competition in the late 1990s, early 2000s when he competed in the Open Comp category at NMRA and the World Ford Challenge with a 1978 Mustang.

“Life had gotten in the way and I sold the race car because of the kids and family. But you never lose the go-fast bug. I always kept a car around, first with some Fox-body and SN95 Mustangs, before getting a 2001 Bullitt, and finally a Mach 1,” shares Ciborowski. He stumbled upon the Coyote-generation Mustangs when a friend offered him to the keys to test drive one before he pulled the trigger on adding a supercharger to the Mach 1. One quick lap around the neighborhood sealed the fate for the special edition New Edge. It was quickly sold off and Ciborowski grabbed the red 2014 Mustang GT shown here.

The Mustang has run a best of 8.58 at 158 mph thanks to a great working race car that produces consistent sixty-foot times of 1.22. That is flying for a car that checks in over 3,600 pounds due to class regulations.
Though a second owner of the Mustang, Ciborowski explained that the original owner acquired it through a raffle for a local fundraiser. The winner actually needed a truck for work, so he put the car up on Craigslist and Ciborowski showed up the next day ready to buy the Mustang. “It was a basic car with cloth interior, which is what I wanted because I knew I wanted to make it into a race car,” he confesses.

“You go to the edge of the cliff, look down, and jump,” Ciborowski shares about how his Mustang went from showroom stock to fast. First on the list was a supercharger and 10.30 runs ensued with ease. And when you jump off the edge, the modifications keep coming at a fast pace. Within a few years the Mustang fit perfectly into NMRA’s brand-new heads-up category, Limited Street.

The backside of the car utilizes a complete BMR suspension setup with upper and lower control arms, panhard bar, and a set of double adjustable Viking shocks on the backside. Up front, BMR was also tapped for a tubular K-member and A-arms and a set of single-adjustable Strange struts are bolted into place. Jim Howell is responsible for welding in the 10-point roll cage, mounting the Kirkey seats, and other odds and ends. The factory 8.8 rear housing is filled with Moser axles, spool, and undisclosed ring and pinion size. It is the perfect solution for quick times, the car steps out with a best of 1.22 sixty-foot from the 3,700-pound race car.

Winning an NMRA championship is no small feat with six national events to attend and Michael Ciborowski remained consistent and fast through all of them.
Rich Groh Racing built the fortified Coyote engine and used a set of Darton sleeves in the factory block and the company’s water jacket supports. Groh then filled it with Diamond custom pistons, Oliver connecting rods, and a stock Boss crankshaft. Top-end is relatively stock with factory cylinder heads that are un-ported by have Ferrea valves, better valvesprings, and a set of L&M custom grind camshafts. The induction system is a VMP Gen 2 supercharger. Additionally, a PMAS MAF sensor and inlet pipe help the supercharger breathe easier. Exhausting the spent gases is the job of American Racing Headers 1-7/8-inch long-tube headers and an MBRP three-inch exhaust system.

The factory ECU remains intact and Bob Monks of STL Mustangs handles the calibration for maximum power. Monks even added a patch to the ECU so it would work properly with the three-speed automatic. Ciborowski had swapped the 6R80 out in favor of a Proformance Racing Transmissions TH400 right before his trip to Florida. The following outing at Atlanta Dragway produced picture-perfect wheelies but the bumper stands prevented Ciborowski from racing his way into the winner’s circle.

It wasn’t until the fourth stop on tour that Ciborowski found the Aerospace Components Winner’s Circle, taking the win with consistent 8.70s. Moving forward through the rest of the year, he fought back and forth with Sondra Leslie trading barbs on track. By the NMRA World Finals, Ciborowski knew he had a lock on second place but needed to come away with a victory in order to stake a claim to the championship.

The Mickey Thompson ET Street Radial Pro 275 tires get stuck to the ground thanks to a complete BMR suspension system fore and aft, Viking double adjustable rear shocks, and Strange Engineering single adjustable front struts.
Ciborowski rose to the occasion, rolled out another string of 8.70 runs as he raced into the Aerospace Components Winner’s Circle again and etched his name in the history books as the first Limited Street class champion. Not only did he collect the championship, his fellow racers nominated him as Driver of the Year. His best time to date has been an 8.58 at 158 mph, an impressive performance given the restrictions of the category and the full weight of the S197 street-car-turned race car.

Of course winning at any level requires dedication and help from his wife, friends, and companies. His crew chief and son, Keith Ciborowski, has been an inspiration and help. Racing has also enabled Ciborowski to spend even more time with his family and his other son Kyle attends events when work allows. Ciborowski has a special passenger on every thrill ride down the track, his son Keven tragically lost his life in a work-related accident and his name is displayed on the passenger’s side window.

“I have to mention Eric Holliday at JPC Racing. He helped spec the motor, transmission, and is always encouraging and helping me push forward. Of course the whole JPC crew that comes racing makes it fun—Tony Hobson, John Kauderer, and Charlie Barnes.” Companies who have stepped up to help in the championship effort have been VMP Superchargers, Rich Groh Racing, HPJ Performance, Proformance Racing Transmissions, and STL Mustangs.

“I never ever thought I would win the championship,” Ciborowski explains. “I have been around the series and watched it from the start. I never thought I would be in the position to be on stage as a champion. It just blows me away. How do you top the year we had? I am going to go and defend the number one on the windshield. You have to show to every race and let the chips fall where they may and you just do it.”