24 Years in the Making

An Automotive Odyssey That Spans More than Two Decades 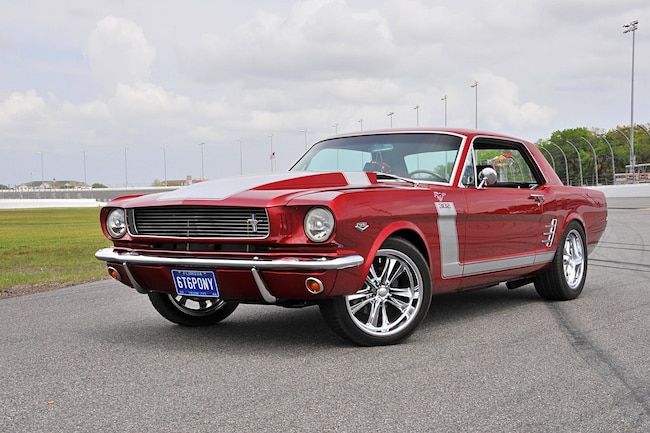 There is some sage old advice that warns against trying to hurry great art, reasoning that it takes whatever time it takes. That notion certainly applies to building custom cars. While they may be functional, they are rarely depended upon for daily transportation so the plan to build a dream vehicle often gets sidetracked by other more demanding priorities. Donald Keyes from Deltona, Florida certainly understands the concept, watching the recreation of his 1966 Mustang hardtop slowly take shape over a period of almost two and half decades! His automotive odyssey began when the car first became a member of the family back in 1991.

Donald and his wife Alicia were riding bikes through the neighborhood and spotted a plain Jane Mustang, equipped with a six-cylinder motor and three-speed manual. It was in poor shape with lots of sheetmetal issues and a ragged interior but there was potential hiding in the rubble. When the original $1,500 asking price was bargained down to $1,250, the car came home. Since Donald had limited body and mechanical experience—he describes himself as “more of a helper”—his wife’s cousin, Jon Olsen in Sarasota, Florida was tasked with the first phase of bringing the car back to life. Olsen owned his own shop and had built many cars in the past and was the right man for the job. The task was comprehensive however, since the Mustang needed new floors, a driver’s side quarter panel, a new lower fire wall, and cowl. Olsen agreed to work on the car on a part-time basis as Donald could afford it but with a three-year-old in the family, disposable income was scarce and work moved at a snail’s pace.

The situation changed somewhat when Donald’s nephew, Scott DeLuca, a paint and body man, moved to Florida and offered to take up the second phase of the challenge. Working together, the pair continued the rebuild, replacing all the panels in the trunk, the lower quarter panel on the passenger side and the outer skins on both doors. New front fenders completed the exterior. With all the sheet metal on the Mustang was finally solid once again and the vintage Pony happily entered phase three with painter, Dave Goerner tackling the cosmetic portions of the build. He smoothed all the panels, aligned the gaps, welded several seams for a cleaner look, installed the aggressive-looking cowl induction hood, and made the car ready for paint. The Red Fire Metallic paint job with its distinctive Mercedes Silver stripes and black rear panel transformed the original sad Turquoise Mustang into an absolute show stopper.

Resplendent in its new color, the Mustang returned home for some assembly. Through an arrangement with Orlando Mustang, Peter Geisler agreed to help Donald complete the car, beginning phase four by working evenings and Saturdays. Upgrades had to be done carefully so as not to scratch the beautiful paint, which in turn led to rethinking the original idea of making the Mustang a drag car. Donald smiles when he says, “After all the work that went into this car, there was no way it was ever going to see a drag strip!” Working together, they installed the motor, transmission, suspension, and rear, detailing the underside in the process.

Since the car started life as a six-cylinder, everything was switched over to an eight-cylinder front suspension, using Laurel Mountain Mustang coil springs to bring it down an inch along with Total Control Products Mid-Eye springs in the rear that also dropped it an inch. The new leaves hold an 8-inch rear (3.55 gears) that’s augmented with Lakewood traction bars to minimize wheel hop whenever Donald floors the long skinny pedal. Grenada disc brakes went in up front for modern stopping power and Ford drums were retained in the rear. Subframe connectors minimized body flex and KYB Excel shocks stabilized all four corners. Although the stock steering box was retained, Shelby pitman and idler arms gave the car autocross-level responsiveness. The chassis became a roller (and a looker!) thanks to 17-inch Foose Knuckle rims and 45-series Continental Extreme Contact rubber.

The new engine is a 302ci V-8 from a 1986 GT, equipped with a set of GT-40 aluminum X heads, a Holley Contender intake, and 600-cfm carb, Daytona Sensors electronic ignition, and Hedman long-tube, ceramic-coated headers that feed a Pypes X-pipe and a pair of Flowmaster 40-series mufflers. Details include a Champion aluminum three-core radiator to provide plenty of cool, a 130-amp alternator to create plenty of juice, and wrinkle-finish Powered by Ford valve covers to capture show points from the judges. The detailed V-8 is showcased in a satin black engine compartment. Donald chose a 1964 Ford four-speed, Top Loader trans, beefed up with a Ford Racing clutch disc and pressure plate.

With so many details completed and the prospects of car shows finally looming on the horizon, Donald knew the interior was the last step in the decades-long process. The high back ProCar Rally Series buckets were chosen as much for looks as comfort, providing lateral support to driver and passenger. The back seats are original, upholstered to match. Providing a functional separation between the buckets, the center console is from CJ Pony Parts, acting as an armrest, cup holder, and natural location for the Hurst shifter. White-face, AutoMeter Phantom gauges on the dash were added to monitor underhood activity. Donald enjoys a hands-on connection with his rejuvenated Mustang, thanks to the GT Performance retro Cobra steering wheel that spins on an adjustable Flaming River tilt column. Cranking out 1960s tunes during road trips, the RetroSound stereo head unit controls a pair of trunk-mounted JL Audio amps. The JX360/4 four-channel amplifier controls the front stage composed of a pair of 6.5-inch coaxials mounted in the kick panels and two 5x7 component sets in the rear package tray. The JX250/1 sub amp powers the 10-inch Dual sub in a trunk-mounted, ported enclosure.

We photographed the car just a short four months after it was finally complete, a journey that took 24 years to accomplish. Now that it’s actually rolling under its own power, Donald and Alicia plan to enjoy it at every opportunity. Hopefully, the trunk will be large enough to hold the collection of trophies sure to be in this rejuvenated Pony’s future. Great rides don’t occur in a vacuum. Donald would like to thank the talented team involved in creating his dream machine beginning with his wife Alicia, his brother Jim, and his parents, along with Jon Olsen, Scott DeLuca, Dave Goerner, Terry Alvarez, Peter Geisler, and the staff at Orlando Mustang.

The classic lines of the ’66 were what attracted Keyes to the car in the first place so only minimal changes were made. The aggressive-looking, cowl induction hood and elegant Red Fire Metallic paint job with its distinctive Mercedes Silver stripes ensure that the car will never travel anywhere unnoticed.
Poised and ready to take on the legendary Daytona International Speedway, the Mustang rolls on all new suspension with Granada disk brakes, quicker steering, and 17-inch Foose wheels that fill the wheel wells.
The 17-inch Foose Knuckle rims and 45-series Continental Extreme Contact rubber look good and stick like Velcro, giving the vintage ride autocross-level handling.
Plush black leather buckets from ProCar by Scat look good and feel even better, separated by a matching custom console. The AutoMeter 5-gauge cluster is augmented by an oversize SunPro tach keeping close tabs on the modified V-8 under the hood. The retro wheel and the Hurst shifter feel good in your hands.
Clean and sanitary, the trunk became the perfect location for the stereo components with a pair of JL Audio amps and the 10-inch Dual sub in a trunk-mounted, ported enclosure.
The sanitary 302 V-8 uses a Holley Contender intake and 600cfm Holley carb to send the fuel/air mix to the GT-40 Aluminum-X “Turbo Swirl” heads. The throaty performance rumble comes from the combination of Hedman long-tube, ceramic-coated headers, Pypes X-pipe, and a pair of Flowmaster 40-series mufflers. The engine feeds a four-speed, top loader trans.