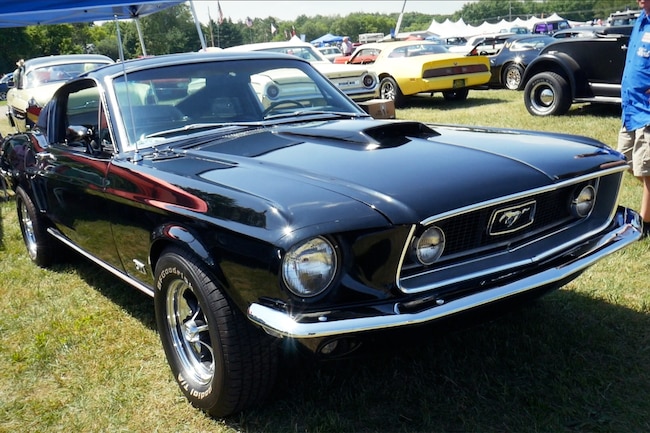 Here's a good barn find story for you. The term (and Jerry Heasley's version of it, Rare Find) usually applies to vehicles that are rare and/or otherwise valuable, that have been stuck in storage and out of the public eye for a long time until some lucky soul happens to find and rescue it from obscurity.

Long-term, neglected storage usually renders the car in less than stellar condition just from age, while many are hidden away after a project stalls, there is damage, etc. But what if the car is in great condition? Does it still count as a barn find? What if it looks like this stock, almost pristine 1968 Cobra Jet?

That's exactly the dilemma Scott Christie found himself in when he got a call from his father-in-law about a car that had been sitting in a garage for a long time. Scott remembers the question, "Have you ever heard of a '68 and a half Mustang?" With his interest peaked, on a very cold January day in 2005 Scott got access to the unheated building and crawled around what he at first suspected to be a "faked" Cobra Jet.

"I looked at it for more than two hours and my father and law was like Man?!?!? Is it or isn't it? And I came from underneath the car and I was sick to my stomach because I was so excited that this was the real deal."

The completely stock Mustang was an easy sell since it still had all the original parts with it, but the owner needed some more convincing to complete the sale because she wanted to know what would become of her car. Scott tried to convince her that he did not want to just "flip" the car for a profit, but rather to lovingly restore it to its former glory. She was unsure what he meant by a restoration—she thought it was still in great condition.

His response was a question that led to the sale of this rare barn find. "Can I have this magazine? And I'm like, of course you can. And she said, 'Then you can have my car. '" Sounds like a good story for Mustang Monthly, doesn't it?