Ford’s pushrod 7.3-liter ‘Godzilla’ truck engine delivers 430 horsepower and has the potential for so much more. 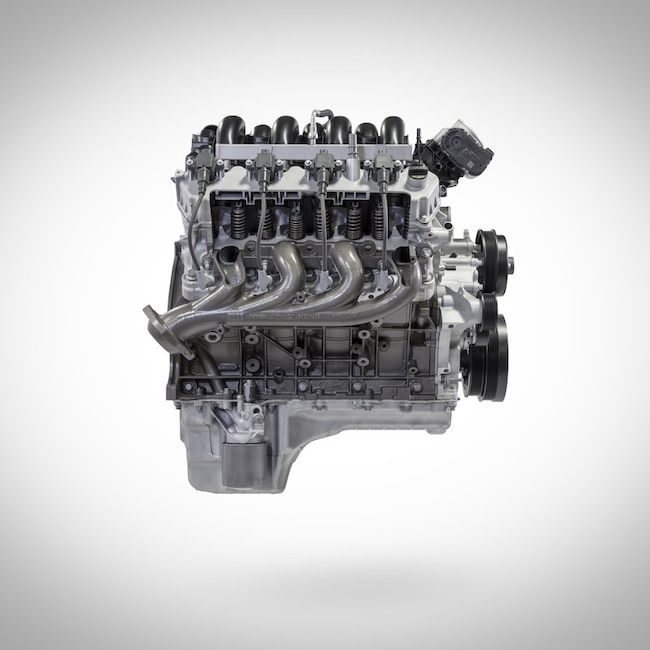 In a world filled with overhead cams and electrified powertrains, the revelation that Ford would produce an all-new pushrod engine stoked the flames of passion amongst Blue Oval loyalists. Not only would this V8 sport the familiar valvetrain architecture, it would clock in a 7.3 liters of displacement. This modern-primitive small-block, known by the nickname Godzilla, is brimming with potential.

Ford's new 7.3-liter gas V8 was built from the ground up for serviceability, durability, and performance. Even the water pump is constructed with strengthening ribs and heavy-duty bearings for off-road use.

For gearheads the 445-cube engine is a story of potential because it was designed as a durable, serviceable grunt for consumer and commercial machines like Ford's Super Duty pickups.

"The 7.3-liter is designed for maximum durability in the harshest environments given that our customers live and work in these conditions every day," Joel Beltramo, Ford manager for gas V8 engines, said. "This engine has the largest displacement in its class and is designed to provide benefits in key areas like power, durability, ease of maintenance and total operating costs."

We travelled to the Woodpile BBQ Shack in Clawson, Michigan on a sunny day to learn about a trio of Ford powertrains, including the forthcoming Shelby GT500's supercharged 5.2-liter engine and its seven-speed dual-clutch transmission, but you'll have to wait a few days to learn more about that pairing. The new 7.3-liter V8, however, is definitely cooking with gas.

The first news out of the gate is the 7.3-liter engine's 430 horsepower and 475 lb-ft of torque. Those aren't exactly legendary numbers by enthusiast standards, but they are class-leading digits for this truck segment. However, we are intrigued by the performance potential of this engine — and for good reason.

Engineers showed us the key internal components of the engine, which had undergone rigorous 3,200-hour full vehicle life simulations, and showed few signs of wear thanks to a focus on building the engine for a long life.

Now-retired Ford executive Brian Wolfe, who has long drag raced and was instrumental in the rebirth of the Mustang Cobra Jet, shepherded it into existence. As such, this engine was built from an enthusiast's viewpoint and it incorporates lessons from Ford's boosted diesel and gas engines to create an engine that is described as 'overbuilt' for its intended application.

"It strikes the right balance between higher torque at lower engine speeds than the overhead cam engines usually deliver, and at the same time it gives excellent pulling power in all the gears," Belltramo said.

With a cast-iron block, a forged steel crankshaft, and aluminum cylinder heads, the 7.3-liter V8 has the makings of a performer. Engineers used similar parts and materials in this engines that it does in boosted gas and diesel engines, so they are quite strong.

"This engine brings a wealth of gasoline-fueled torque from very low rpm. It's not just about the peak numbers, it's about what it can do across the rpm range," he added.

Given its intended use, it delivers a long, flat torque curve that is ready to haul whatever is behind it for a long time. It also offers a more affordable option for those who don't need diesel performance.

"The design work was based on what our commercial customers need, and we've got years of experience with them. When they came to us they were talking about accessible power for everyday usage, mechanical simplicity, and they also wanted a compact package so it's easy to work on. Above all, it's got to have long-term durability and bring overall efficiency for their fleets."

While it does use an old-school cam in the block, push rods, and rocker arms to actuate the valvetrain, this engine does employ variable cam timing. However, it does run traditional port fuel injection.

That mission led engineers down an unexpected path in creating the first Ford gasoline heavy-duty engine in 20 years and the most powerful gasoline Super Duty engine ever. That path was a cam-in-block, pushrod, overhead valve setup that was once the norm among American automakers. To the uninitiated it might sound like Ford built its own LS, but those in the know are aware the Brand X pushrod engine borrowed a fair amount from Ford's 351 Windsor. As luck would have it, the new 7.3 engine is assembled at the Windsor plant, so maybe we can call it the 445W?

Not related to the old-school Windsor or the modern Coyote-family V8s, this engine was designed from a clean sheet, and its facets are a veritable list of performance engine components. Based on a forged crank, it swings beefy rods and pistons that wear ring technology born in Ford's boosted engines. It heads feature tall ports with ample flow, and the combustion chambers are wedge-shaped.

Tall beehive springs and lightweight retainers keep the valves in place while forged aluminum rockers open and close them at the behest of beefy pushrods motivated by Ford-specific lifters. Those cast manifolds look like a nice set of high-flow short-tube headers, but imagine what long-tubes will do for this engine.

The valvetrain runs Ford-specific lifters, robust pushrods and forged aluminum rockers with roller fulcrums. The rockers are designed to flow oil to the tip at low engine speeds to guard against wear. Its valvetrain uses tall, beehive springs that allow big lift while minimizing spring deflection, and even the retainers are lightweight.

A variable-displacement oil pump feeds oil from the aluminum pan in the exact volume and pressure needed for a given instance. "So the PCM sitting there and it's looking for an oil pressure at once. If it's hot out, it's going to command the displacement. We give it the oil pressure. If, you know, if somebody is running winter weight oil in the engine and they get a little too warm and springtime before they change it here, dial up its displacement a bit," Joel explained. "So you get the oil pressure and then the oil cooler is actually way oversized on the engine. So fundamentally the oil cooler set up in hot weather to cool and in cold weather, it's actually a heater. So it keeps the oil temperature normal operation right in the sweet spot."

Ford imported techniques and materials used in its boosted diesel and gas engines; include coatings on the rings, the bearing materials, and even the design of the rods. All these features allowed the engine to survive and intense 3,200-hour full vehicle life simulations that included running at maximum output for hours on end in wide swings of high and low temperatures.

To show just how well the design works, engineers brought out display parts that were run through these tests in an engine, and they only showed minor wear. Not only is the hardware strong, but the engine is also built with durability in mind.

A forged steel crank is the heart of a performance engine, and the 7.3-liter engine is born with this muscular unit.

"We dramatically increased oil flow to the valvetrain beyond what is the industry norm for these tappets. When we send more oil up here, we are sending it directly to these wear surfaces," Joel explained. "The rocker arms are actually designed so that the oil can come out at the top and there are channels that carry it over at low engine speeds to the valve end."

Of course, the fact that the engine is rugged gets our wheels turning about how far it might be pushed. Intake, cam, and exhaust upgrades could transform its torquey personality, and further mods might really expand its horizons.

" If they want to stay with steel valves and such, so they're going to be far more rpm limited than Coyote is, but if they want to go spend the money for titanium valves, well then they get away from a lot of stuff and then they have 7.3 liters," Joel said of those looking to modify the engine.

The forged aluminum rockers feature passages along their crown that funnels oil to the tip to reduce wear on the valve stem.

Of course, another happy side effect of the pushrod architecture is the big-displacement engine is actually a bit shorter narrower than a Coyote 5.0-liter, which means it is a prime swap candidate for restomods. If the aftermarket supports it with supporting hardware, we can see this being the next 'big' thing for Ford hot rodders.

Built as strong as boosted pistons, these slugs wear coated rings, and are cooled by oil jets that mitigate heat under higher loads. 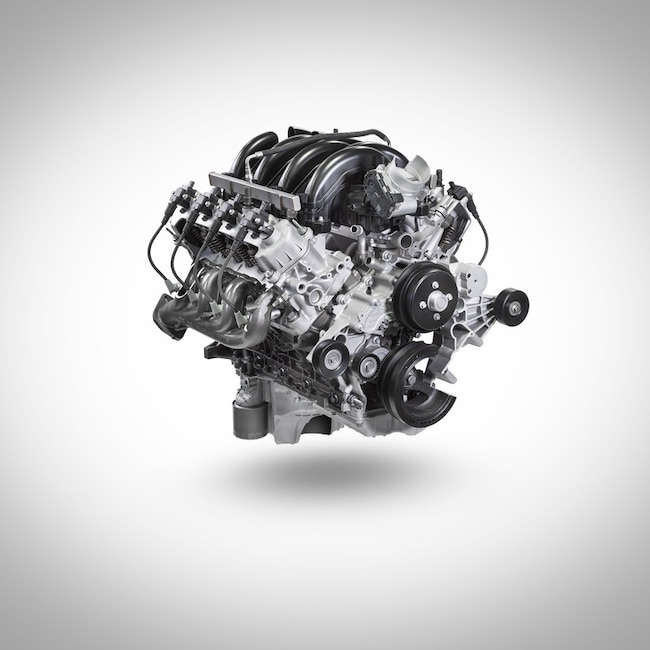 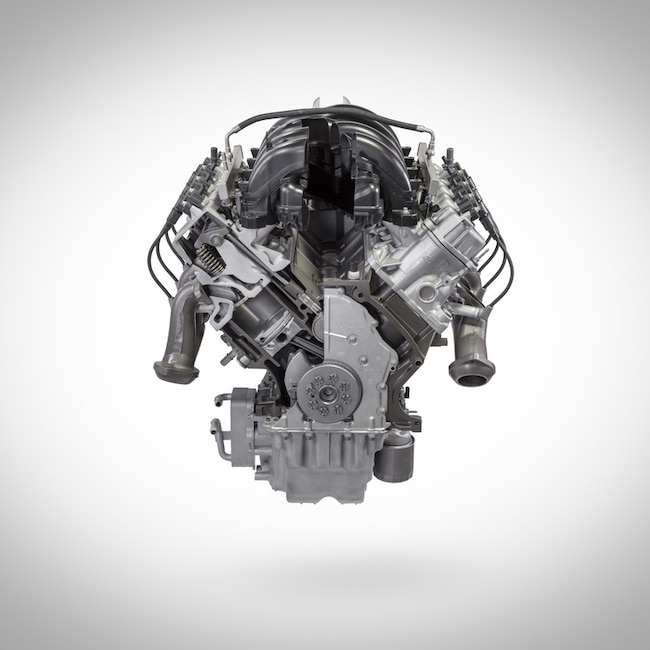 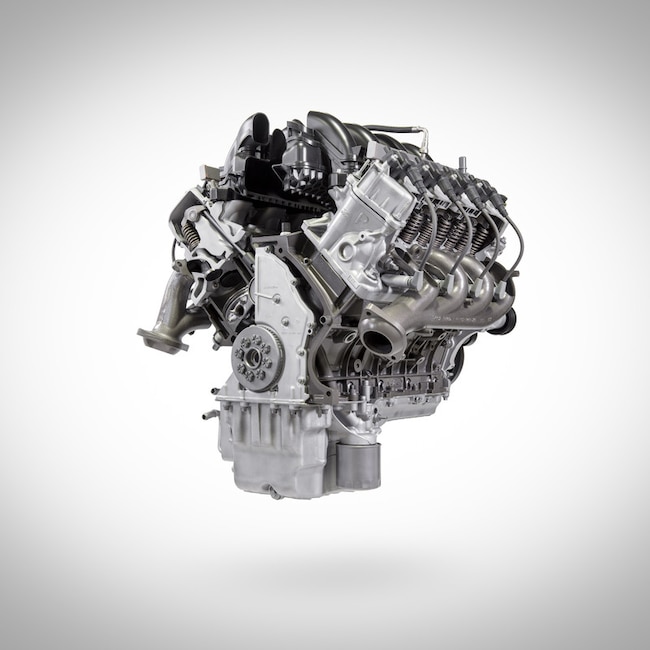 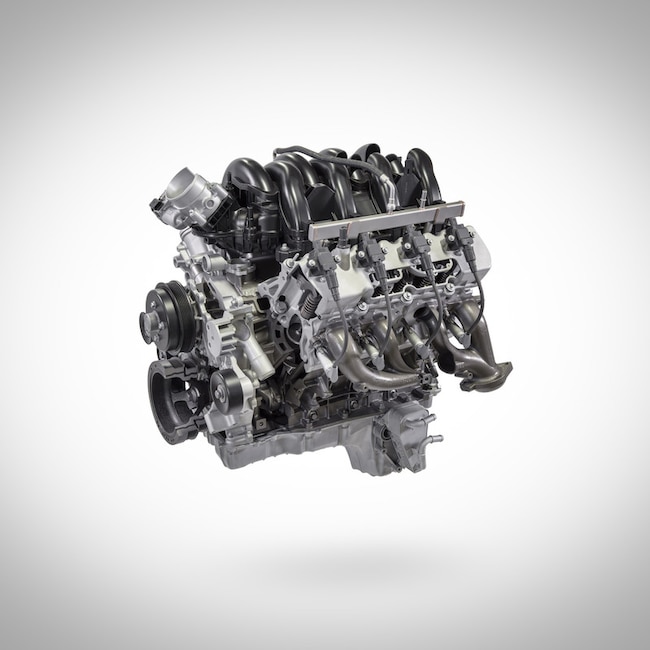 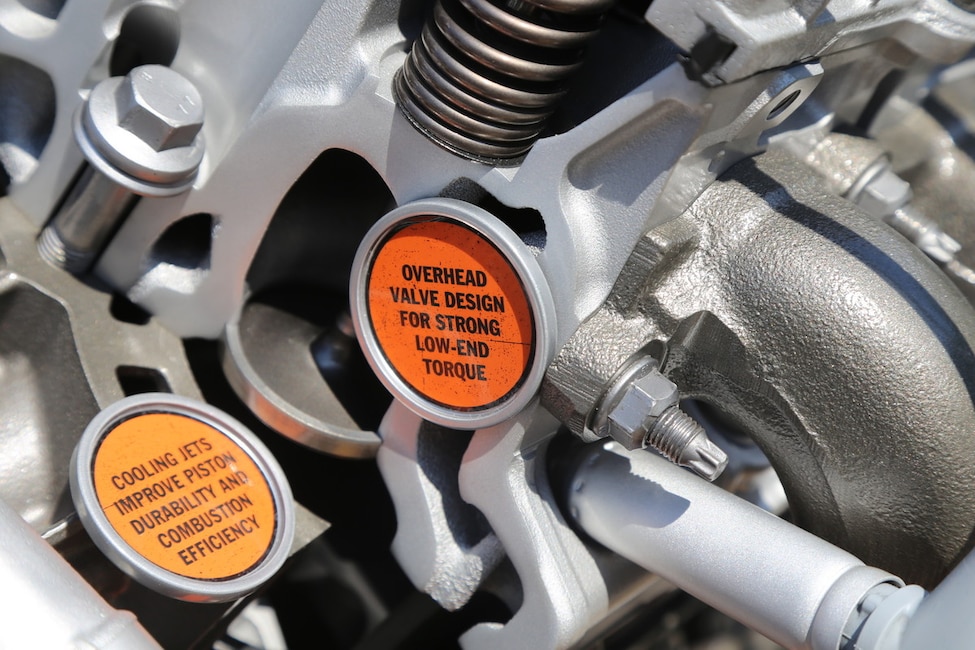 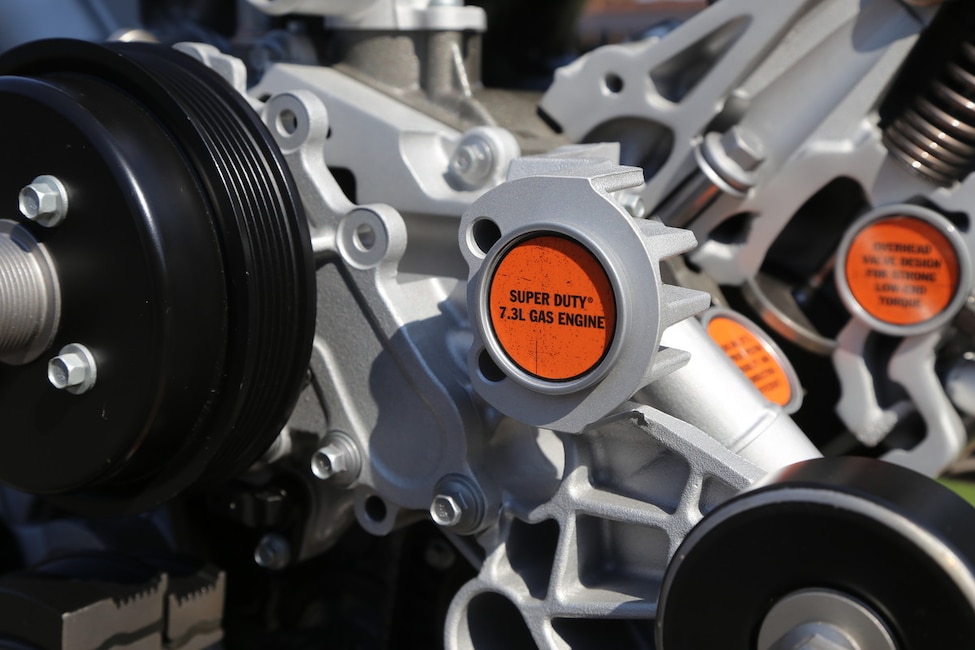 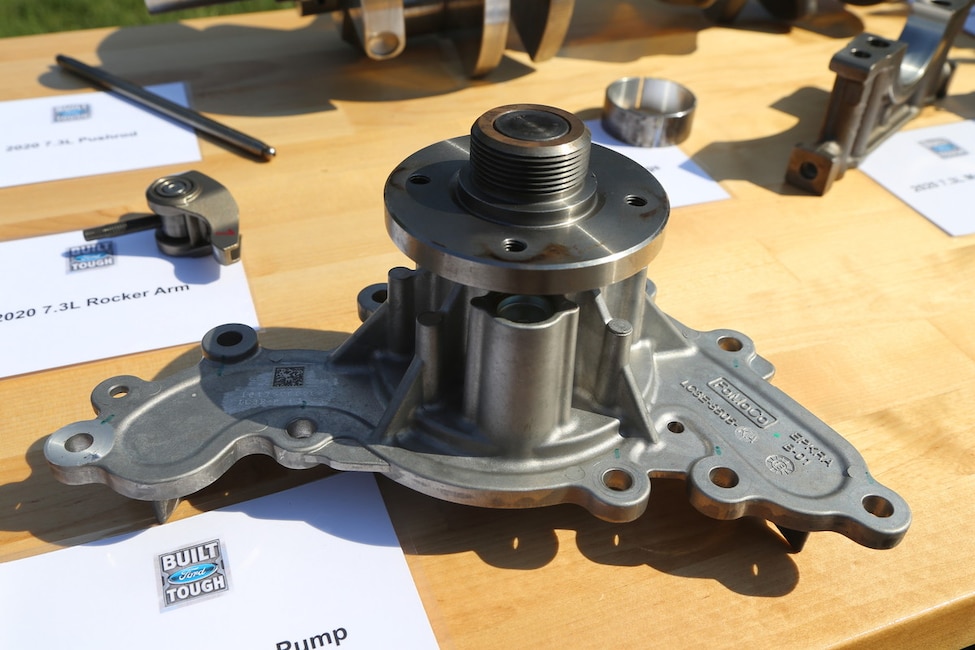 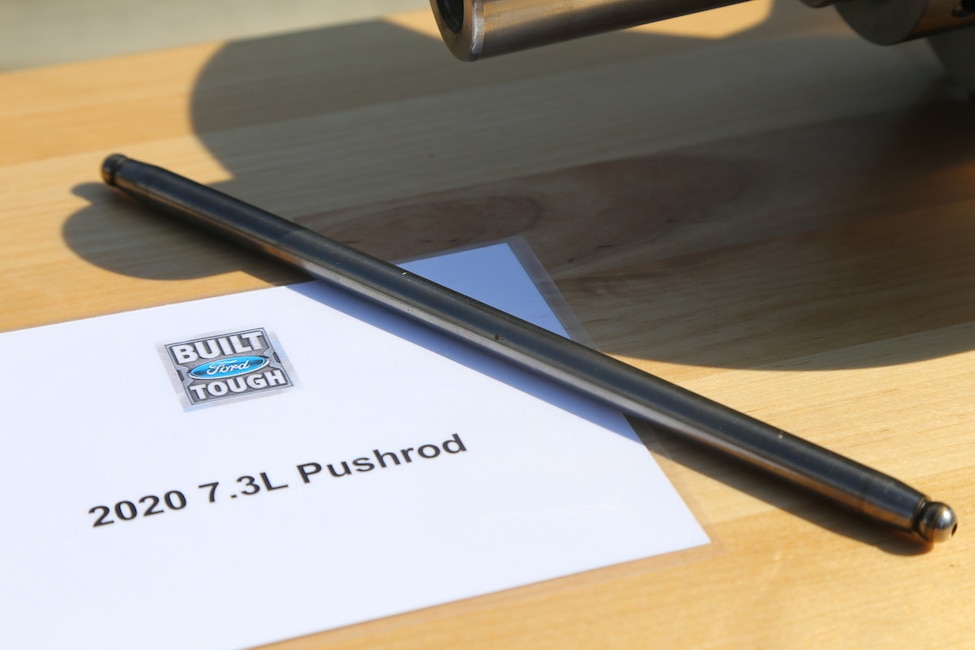 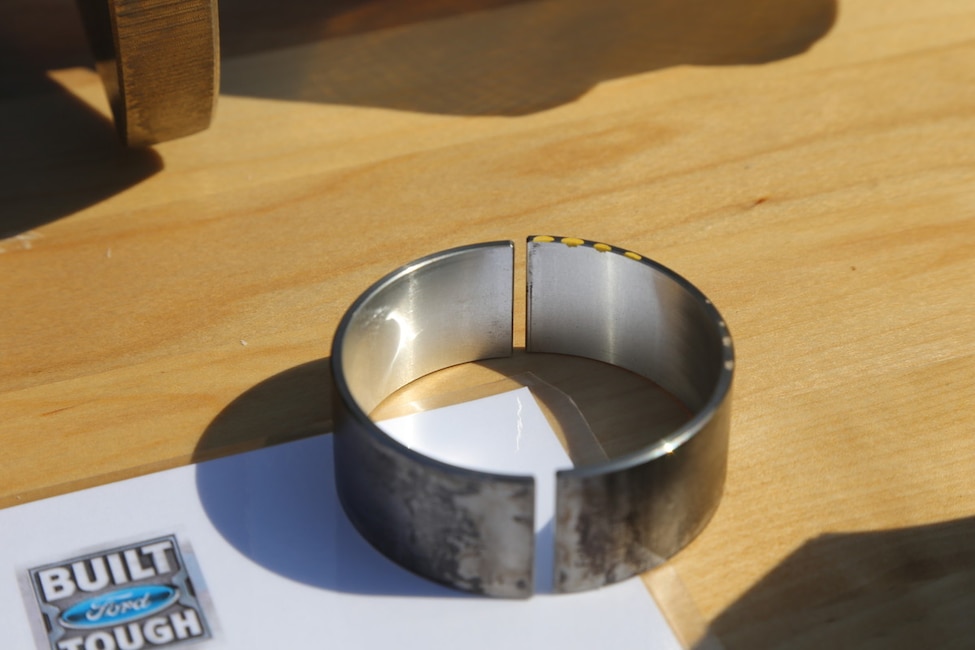 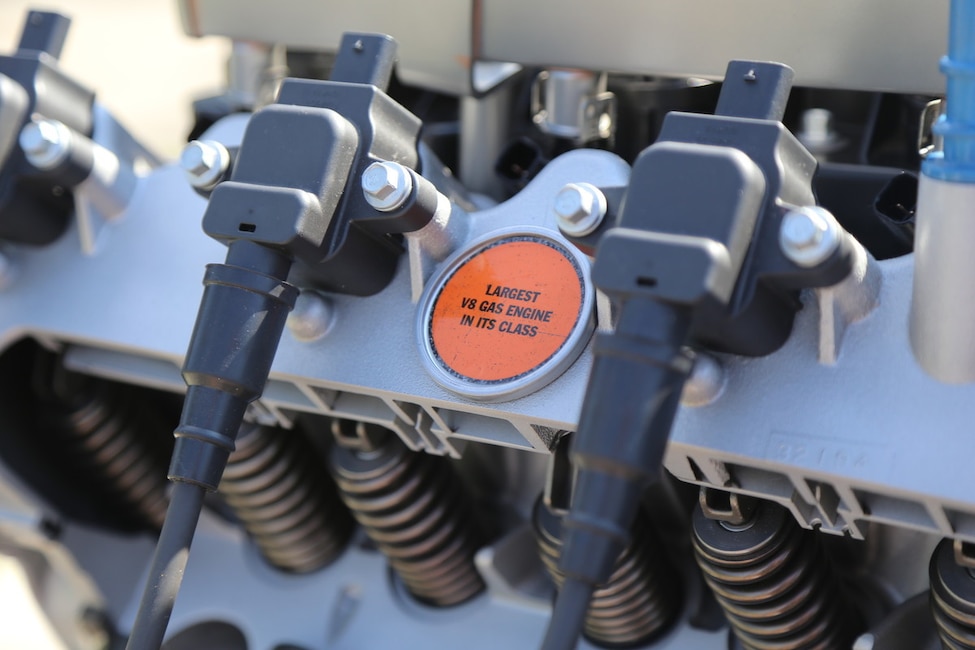 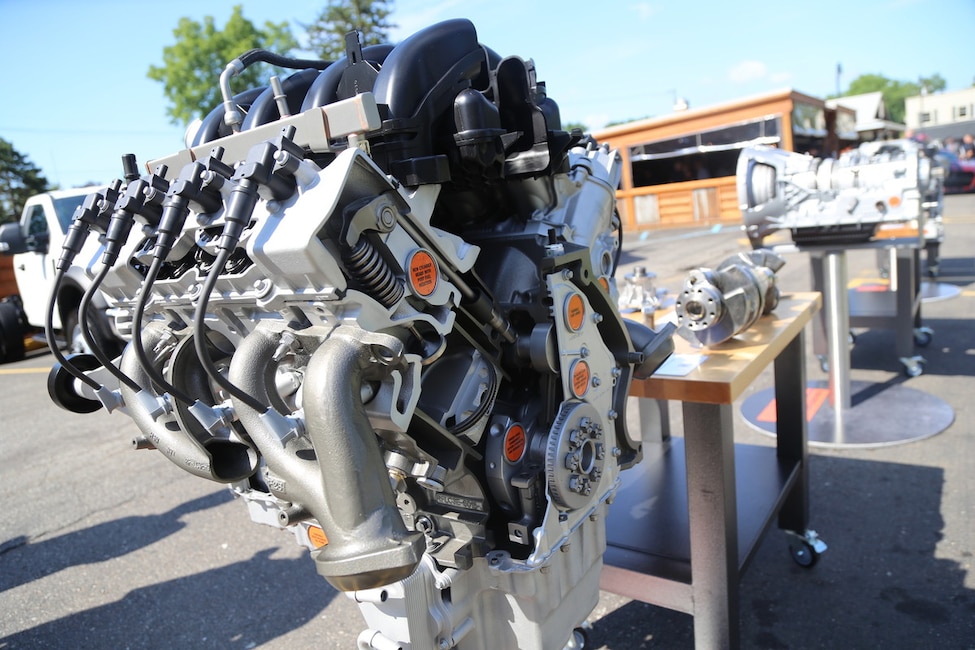 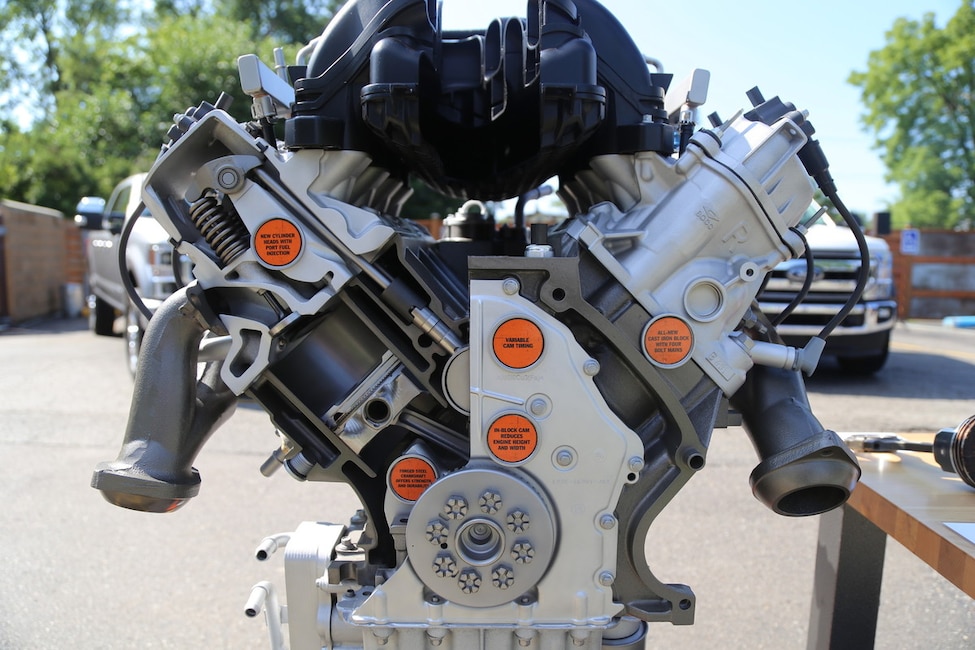 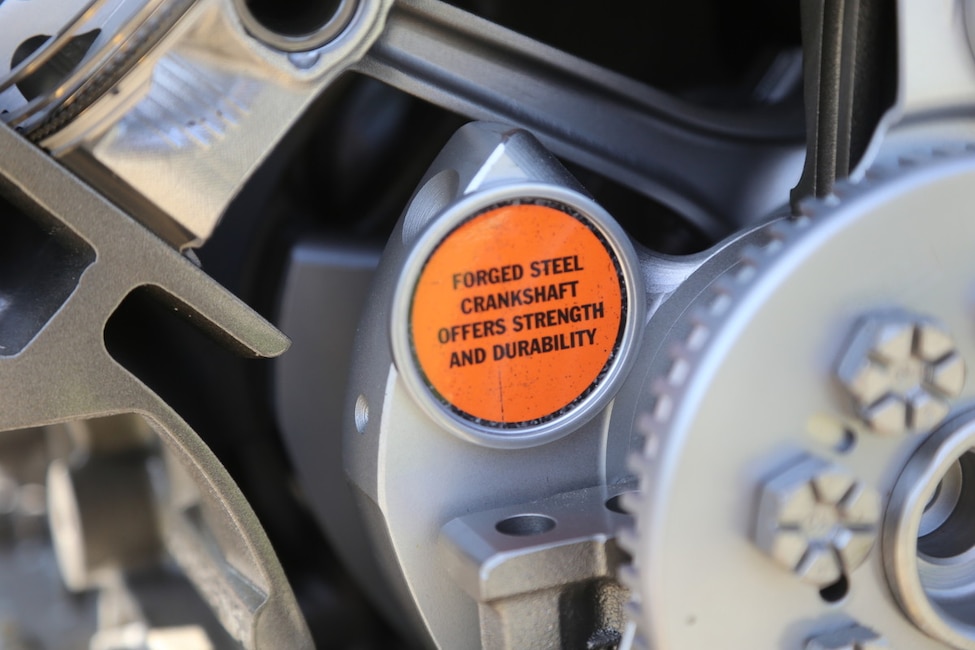 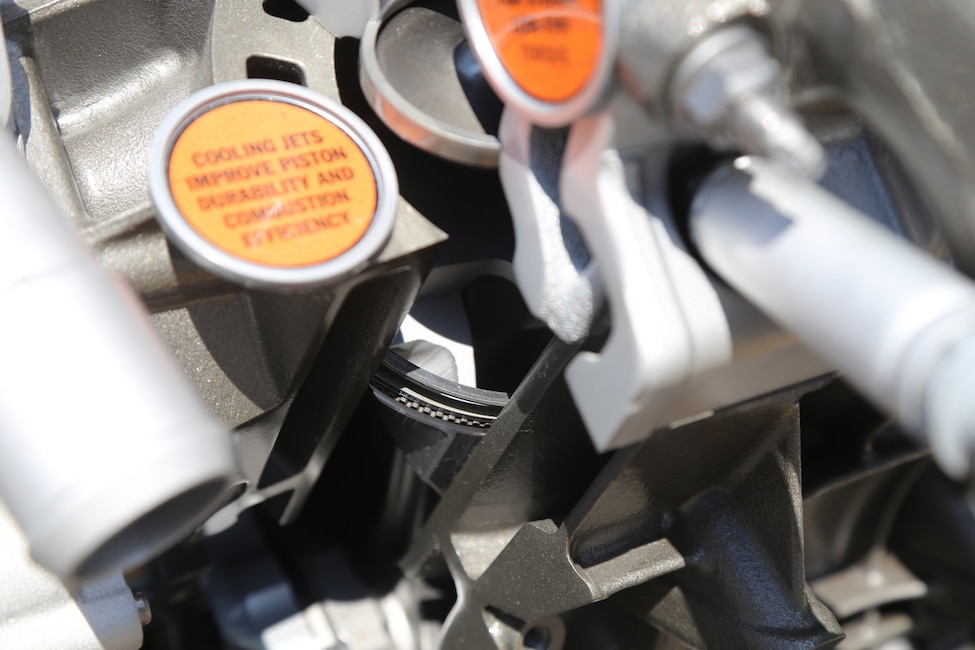 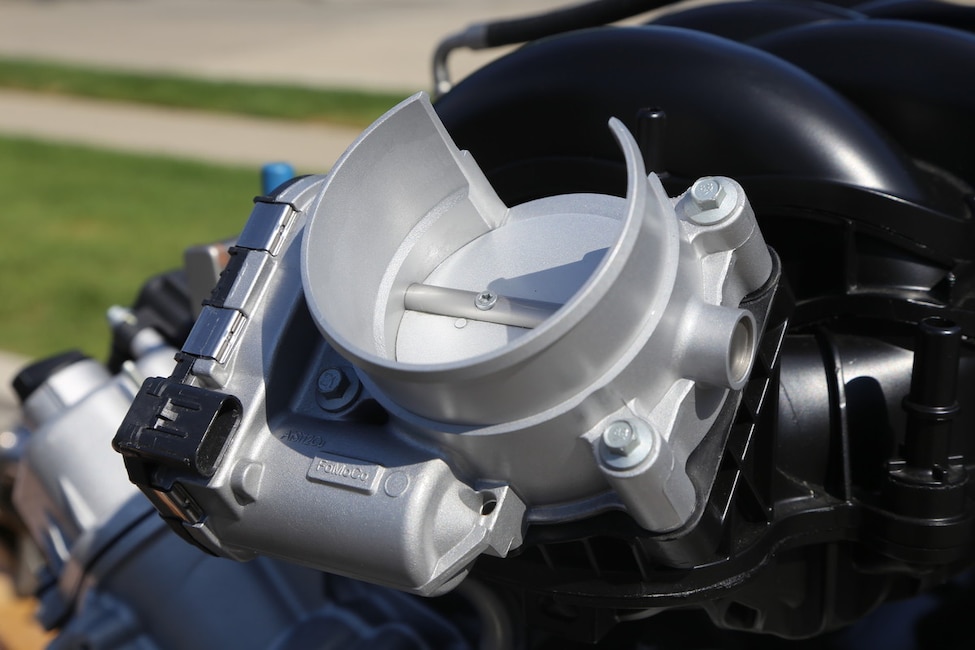 Speed is David Carpenter’s drug of choice.
Re-Spec Your Elders!
10 Must-Watch Storylines in NASCAR This Year