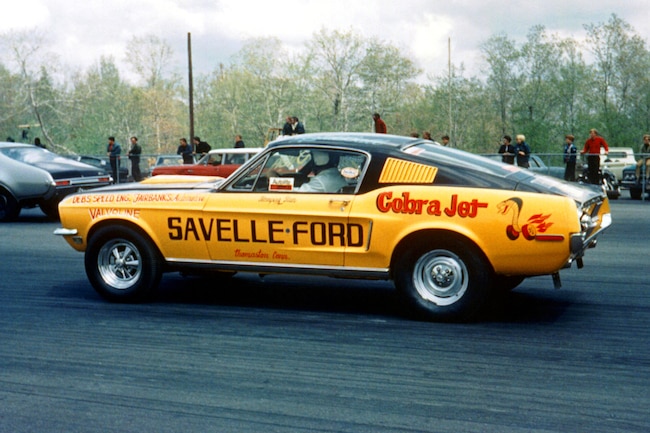 "We had two Ferraris here at Savelle. I took one out one day, and they were just slow compared to that Cobra Jet."

John Woermer was a truck sales and leasing manager with Savelle Ford in Thomaston, Connecticut, in the late 1960s. His recollection of the 1968 Cobra Jet has been echoed by nearly everyone who has sat behind the wheel of a "135" Mustang—Ford's last big effort to support drag racing in the 1960s. John warmly remembered the day the transporter pulled up to Savelle Ford in the spring of 1968 with a Body-In-White (BIW) 1968 fastback Mustang on the hauler. Number 8F02R135024, one of 50 factory-produced Mustangs (the 18th car in the batch), would be campaigning under the Savelle Ford banner in what was shaping up to be the most competitive factory-supported effort of the muscle car era.

But why was Savelle Ford receiving one of the most potent Fords of all time? Inventory at Savelle wasn't exceedingly slanted toward muscle cars in 1968. In fact, a few short years later the dealer would be known much more for its Mazda sales than its 429 SCJ Torino sales. The likely answer resided in a multitude of things. Stu Savelle was a New York District Ford Dealers Association trustee; a close, personal friend of Lee Iacocca's; and also a very successful dealership owner. Stu was also going to be breaking ground on a new dealership location (May 1969), expanding his Ford footprint and keeping his name in the New England area.

Lastly, he understood that the words "Savelle Ford" slapped on the door of a CJ Mustang were bound to lead to queries and sales. So, Stu accepted the Mustang with open arms in the spring of 1968. Tapped to campaign the car was "Stamping Stan" Lizauskas, who would eventually harness another racing skillset when he began building engines for Mazda racers.

Under Stan's command, the Cobra Jet Mustang would forage the New England area, campaigning at the Connecticut Dragway and Dover Dragstrip. "Stamping Stan" even trailered out to Indy for the 1970 U.S. Nationals, accompanied by an even more important Mustang—Al Joniec's former 1968 Winternationals mount that's now under Harvey Wilson's ownership, another New Englander.

For the first year the Cobra Jet sported a rather subtle Acapulco Blue paint scheme, but after about a year with the car, the Cobra Jet received something more outlandish. No longer subdued, the Savelle Ford Cobra Jet now sported a two-tone respray featuring a mustard yellow bottom half with a black top. The hoodscoop and sail panel vent louvers featured the yellow accents as well, tying the car together.

It's unclear how successful the car was or what prompted the color change in 1969. Historic photos indicate the car continued in this scheme with Stan behind the wheel into the early part of the 1970s until it virtually vanished.

Stuart Savelle passed away much too soon in March of 1978. John Woermer made the move to the Waterbury, Connecticut, location and remained with Savelle until 1972; he eventually ended up in real estate after his time at the dealership. Stan Lizauskas is still around but suffers from memory loss.

If you have information on the Savelle Ford Cobra Jet, please contact me at wes.eisenschenk@gmail.com or reach out to us on Facebook at facebook.com/lostmusclecars.

In what appears to be a freshly repainted CJ, "Stamping Stan" gets in line for a pass down the 1,320. Sponsorship includes Debs Speed Engineering and Fairbanks Automotive.
Savelle Ford was on the corner of Route 6 and 8 in Thomaston, Connecticut. The dealership would move to a new location in 1970.
Stuart (Stu) Savelle (left) and Lee Iacocca (right), likely at one of the New York District Ford Dealers Association meetings.
The Savelle Ford Cobra Jet inches to the line in what was likely a tough day at the office against the stout Berejik Olds at Connecticut Dragway.
Al Joniec's former mount, now owned by Harvey Wilson, made the tow with Stan Lizauskas to the 1970 U.S. Nationals.