Newsletter
Sign Up today for our FREE Newsletter and get the latest articles and news delivered right to your inbox.
Home
Muscle Mustangs & Fast Fords
Features
News & Views

Real Speed Automotive maximizes the power of a 1989 Mustang LX 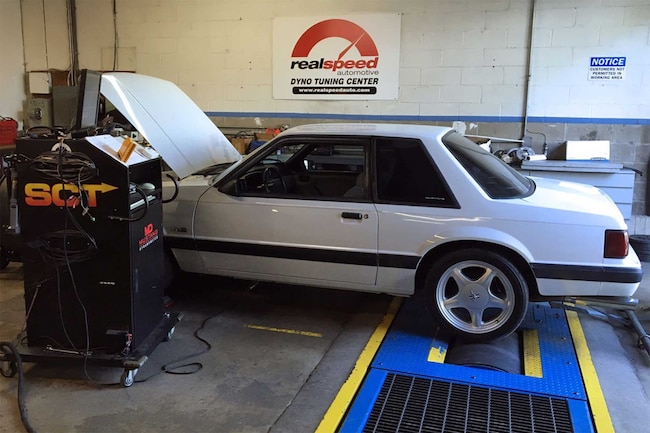 We love Fox Mustangs. Let's go ahead and get that out of the way. However, with Ford releasing news of the 2020 Shelby GT500's 760 horsepower that old Fox in the garage looks pretty anemic right now. But aside from waiting for Ford Performance to release a GT500 crate engine and control pack, or throwing a big crate engine with an equally big blower under the hood, your options are slim at making 760 horsepower.

So, what is there to do?! You want your Fox to run well, but if you just got into the game, chances are you paid a premium with today's prices. So much so that perhaps you'll have to save up to put some real power at your right foot's disposal. What you can do, though, is maximize your Fox Mustang's power right now. Every Fox Mustang can use a few things that will make a big difference in both drivability and performance.

With a heads, cam and intake package on his 1989 Mustang LX 5.0, Vinny's car made 272 horsepower on Real Speed Automotive's Mustang Dyno. However, it suffered from a couple shortcomings, mostly related to the stock mass air meter. Back in the day we usually started with installing a larger mass air meter and throttle body, a cat-back exhaust, and bumping the timing. Vinny's car had it a little backwards. His car had the necessary mechanical upgrades, but with a stock meter. Baseline tuning showed adding a larger MAF and calibration work would result in horsepower gains. "The massive increase in airflow over stock from the better heads, cam and intake was exceeding the range of the stock MAF sensor, causing the engine to trend lean at high rpm as the actual airflow increased," Dan says, "But the computer's interpretation of airflow from the MAF signal flat lined at the top of its range."

Case in point, Dan Carlson from Real Speed Automotive received Vinny Allegretta's 1989 Mustang LX 5.0 to improve the car's drivability and horsepower. Vinny's LX featured the typical modifications like Ford Performance GT40 aluminum heads, an Edelbrock Performer RPM II intake manifold, an E303 cam, headers, a BBK cold air intake and a few other common performance upgrades. "It put down 272 horsepower to the wheels on our MD1100SE Mustang chassis dyno the way it arrived," Dan says, "But we knew there was more power to be had."

When the car first arrived at Real Speed, Dan checked key items like ignition timing, spark plugs, and other pertinent systems to make sure everything was in good, running order. "A fitting was welded into the exhaust mid-pipe to give us more accurate air/fuel readings than what we could get from a simpler tailpipe sample probe," Dan says. It was at this point that the car laid down 272 horsepower. With the baseline established, Dan went to work.

It was decided to add a BBK 76mm mass-air meter to the mix, but Real Speed had to cut the existing cold air pipe in order for everything to work together. Dan then made sure the meter was level saying, "The 90-degree bend coming out of the fender in front of the MAF from the cold air intake can have a surprisingly large effect on the MAF signal and the resulting air/fuel ratio, depending on which way the MAF sensor is tilted. Previous dyno tests showed that on some cars tilting the MAF from 45 degrees left over to 45 degrees to the right altered the wide-open-throttle fuel delivery to the engine by an astounding 55 percent." Dan sets the mass air meter level, and marks it down in his notes. Dan says it's not super important to level the mass air meter, but that it is important to maintain it at that level while tuning the car, and for the life of that combination to ensure repeatability and consistency.

One performance aspect standing out to Dan was the stock mass air meter was still in place. With the car's modifications, and 24 lb/hr injectors, the stock mass air (which is calibrated for 19 lb/hr injectors) featured the wrong calibration. Second of all, all the modifications made were inhaling air through the equivalent of a stir stick you'd use in your coffee. Dan tackled this issue from two different directions to help illustrate the gains possible by having the correct calibration, and then seeing if the stock meter was indeed causing a restriction.

First round of tuning Dan tuned the engine to compensate for the larger injectors, but also performed some basic tuning tricks he does to every Fox combination. Doing so increased the car's output from 272 horsepower up to 292 horsepower. "A little more fine tuning resulted in another 1.1 horsepower gain up to 293.2 horsepower and a better air/fuel ratio throughout the entire rpm range," Dan says. Knowing he now had the car optimally tuned, he wanted to see the impact a larger mass air meter would have on horsepower.

The engine compartment doesn't look much different from when it arrived at Real Speed Automotive. The only part changed out was the mass air meter. However, car owner Vinny Allegretta has 30 more horsepower at his disposal. The car made 272 horsepower when it came in the door, but left with 302 horsepower. That number has a nice ring to it.

Since the car has a BBK Performance cold air kit, Dan stuck with that company for one of its 76mm mass air meter calibrated for 24 lb/hr injectors. The stock meter measures 55mm, so right at the outset we know the larger meter will be able to flow more air, which is what the car's modifications really needed. With the new, larger meter, and adjusting the MAF transfer function, the combination gained 9 horsepower to arrive at a total of 302 horsepower.

No, it's not 760 horsepower, but with just a little science, a professional tune, and one product, Vinny's LX now benefits from 30 more horsepower. We bet he loves the extra power and improved drivability.