Newsletter
Sign Up today for our FREE Newsletter and get the latest articles and news delivered right to your inbox.
Home
Mustang Monthly
Features
News & Views

The Gift That Keeps on Giving! 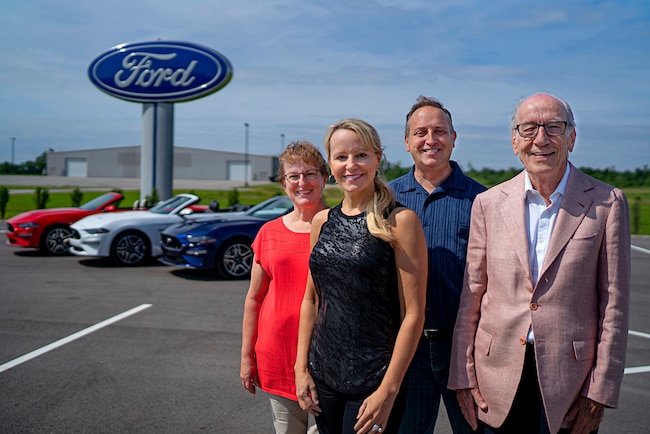 There are surprise gifts, and then there are surprise gifts, and this is one of the latter. When it's all about family and patriotism, plus Mustangs, it hits all the bases that we're fond of as Americans and Mustang enthusiasts. This 4th of July, Kaywin Martin knew he wanted to do something patriotic to celebrate his 80th birthday so the Illinois native decided to surprise his three children with 2019 Mustang GT convertibles in red, white and blue.

"This is a very patriotic time of year, between Memorial Day, the 75th anniversary of D-Day, and the 4th of July holiday, so I thought it was fitting to commemorate my 80th birthday in a patriotic way," said Martin. "We're celebrating America with an American icon."

More than 20 of Kaywin's friends and family members gathered in Auburn, Ind. at the Early Ford V-8 Foundation Museum to celebrate his milestone birthday. When the family pulled into the museum's parking lot, they assumed the brand-new red, white and blue convertibles near the front entrance were staged for the upcoming holiday. They would soon learn otherwise.

Martin's children and grandchildren shouted with excitement when their grandfather shared that the red, white, and blue Mustangs were gifts for the family. Martin's grandson Drew, who is slated to get his driver's permit within the year, immediately asked his mom if the white Mustang would be his car. Martin's daughter, Terri, was confused, saying they should be the ones surprising her dad, not the other way around. His son Ken was moved to tears.

The family spent the rest of the morning trading stories of their father's generosity, taking pictures with their new Mustangs and hitting the country roads of Northern Indiana. Later, they ate lunch the museum, which Martin has helped restore and expand in recent years, visiting his classic 1941 Ford, which is now a permanent part of the collection.

For those who know Martin, the idea that he would gift three Mustang convertibles to his children is not inconceivable. His father was an automobile dealer in Central Illinois, and Martin spent his entire career with Ford Motor Co., retiring in 1993 after 30 years of service. Throughout his career, he developed a passion for classic Ford vehicles, purchasing his first Ford vehicle in 1957, the year he graduated college. He went on to own roughly 200 vehicles. In the 1980s, he purchased a classic 1941 Ford and, later, his first Ford Mustang—a 1965 red convertible—the first year it was ever sold. In 2011, his interest in Mustang took off and he purchased seven GT convertibles in seven years, including the 50th anniversary Mustang, also a red convertible. He's owned more than 20 Mustangs over the years.

Martin, who now lives in Florida, still comes home to Illinois to purchase his vehicles from longtime Ford dealer and friend, Mike Mangold, who drove four hours to celebrate with him. Martin's red, white, and blue Mustangs represent the 6th, 7th, and 8th "gift Fords" he has purchased from Mangold Ford, all of which have gone to his family members.

After seeing the reaction of his family to his 4th of July Mustang gift, Martin remarked, "Time flies, so I better start thinking about my 90th birthday."