Newsletter
Sign Up today for our FREE Newsletter and get the latest articles and news delivered right to your inbox.
Home
Mustang Monthly
Features
Project Vehicles

Watch the first stage in our latest Week to Wicked buildup: Converting a 1967 Mustang hardtop into a fastback with Golden Star’s single-part-number sheetmetal kit 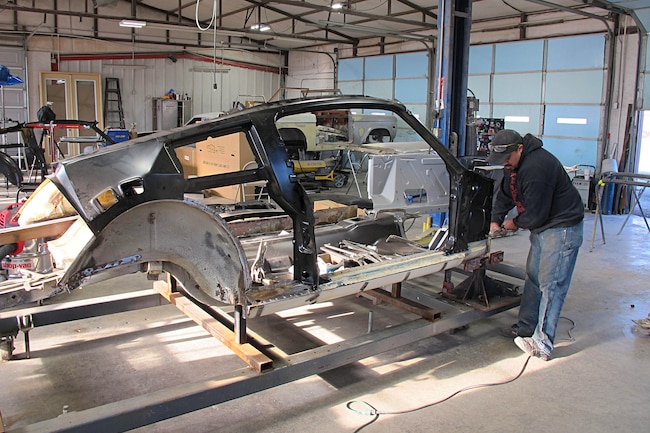 Mustang-360.com has completed two Week to Wicked projects. The first was in July 2017 when we built a 1966 hardtop from the ground up; then in January 2018 we turned a 2013 GT into a fire-breather with bolt-on parts. Because we're gluttons for punishment, we've decided to do it again, only this time we're getting way more involved by starting with a reasonably ratty 1967 hardtop that we're converting into a fastback with sponsor Golden Star's sheetmetal kit.

Many people prefer the look of a fastback Mustang to a hardtop, but if you've priced a good fastback Mustang lately—nice, rust-free examples are north of $30,000 anymore—converting a hardtop to a fastback starts to look more attractive, and Golden Star has just made it an affordable option. Golden Star is not the first company to make replacement sheetmetal for a fastback conversion, but they went a step farther than the rest by packaging every single piece of metal needed for the conversion into a kit that has just one part number. That includes stamped and welded one-piece sides from the cowl all the way to the rear wheelhouse, plus the roof skin, braces, and all those little sheetmetal pieces that the interior trim mounts to.

The conversion from hardtop to fastback for our latest Week to Wicked car is taking place at PG Customs & Bodies in Decatur, Texas, a dealer of Golden Star parts and a custom body shop that often helps Golden Star test-fit new parts and provides feedback on fitment. PG is also handling painting the car, but more on that at a later date. Here, we'll show you an overview of what's involved with the actual conversion.

The whole conversion process happened in about a week's time, and the total cost is around $10,000, labor included. Yep, that's right: Golden Star's conversion kit costs under $5,000, and PG Customs & Bodies charges an additional $5,000 for the labor to put it all together (not including paint, of course, and any additional rust or sheetmetal damage repairs). Other body shops may charge more for it—PG has done numerous conversions like this and has it down pat.

Week To Wicked Finale: Installing a Complete TMI Interior, Dakota Digital Gauges, and Final Wiring with details to make our 1990 Mustang LX Run and Drive.
Week To Wicked, Day 4: Mocking up a BeCool Radiator and Derale Fans and Shroud in our 1990 Fox-Body Mustang
Mustang 360