David Carpenter’s turbo Coyote coupe is his drug of choice. 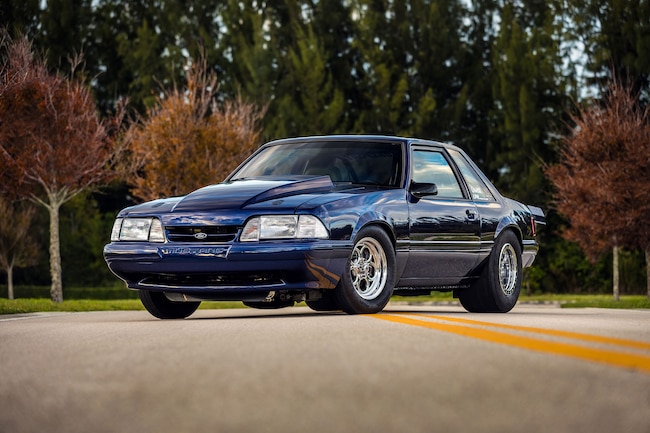 For racers, going fast is more addictive than any drug. In fact, speed is the drug. Given the competitive nature that makes racing what it is, drivers are always pushing the limits of their combinations, innovating in an attempt to find more horsepower, and spending countless hours to ensure they are better than the competition. Sounds like an addiction, doesn't it? While there isn't a 12-step program for racing addicts (there probably should be), racers get their fix behind the wheel.

David Carpenter is a racer. The 38-year-old parts manager from Lake Worth, Florida is the proud owner of the amazing '92 Mustang you see here. While some of you may look at this and cry trailer queen, the fact of the matter is this is just as much a street car as it is a racecar. Sure, it may lean a little more to the racecar side, but the license plate isn't just for looks.

Kona Blue is an elegant, clean color and looks amazing on a fox Mustang. This SSP coupe belongs to David Carpenter and is the culmination of a nearly 8-year that ended in perfection.

To understand how this car came to be, we need to go back nearly 8 years. The coupe started life as a white SSP car, but around the same time the Coyote engine was released, this car began its journey to what you see here.

David bought the car as a roller. When he found the car it had been sitting in a field, so you can imagine what kind of shape it was in. Luckily, the car was almost completely rust-free. After cleaning it up and assessing what needed to be addressed, he started a full restoration. From day one, his plan was to build something brutally fast and incredible beautiful, and he was well on his way.

The car was purchased as a roller and was pulled out of field before the restoration started. David tells us the car was rust-free and a great starting point for this awesome street/strip monster.

As part of the restoration, the engine bay became the center point of the project, partly because of the Coyote engine that would soon reside between the frame rails (we'll get to that shortly). The engine needed a home suitable for its growing reputation as a powerhouse. This meant countless hours of incredibly detailed work to fill every hole, making the engine bay perfectly smooth. After all, every king needs his throne, right?

With the engine bay complete, David turned his attention to the rest of the car. With the interior stripped, the chassis work and roll cage were installed. The 10-point cage fortified the chassis, while being designed to keep David safe in the event something happened at a high rate of speed. The car was then mini-tubbed to allow for extra real estate for larger rear tires. After all, traction is important! To that end, the right suspension components were needed to harness the power David had planned. For this, he turned to the experts at UPR Products. He needed suspension components there were not only strong, but also lightweight. UPR specializes in chromoly suspensions components designed for the abuse of both the track and the street. This made them the perfect choice for this soon-to-be rocket ship. David installed UPR's Pro Series K-member and A-arms, subframe connectors, and adjustable upper and lower rear control arms. The rear suspension was finished with a UPR antiroll bar to keep the car flat and level during hard launches.

Under the hood lives a boost fed monster. This 305ci Coyote was build by Ronnie Crawford and makes roughly 1200 horsepower.

The front suspension was completed with a set of Viking Crusader struts. The rear suspension uses a set of QA1 double-adjustable shocks. The rearend housing is a modified 8.8-inch unit, with a Moser 35-spline spool and axles, and 3.55 gears.

With the restoration nearing completion, the aesthetics became the focus. Color was important, and David picked Ford's Kona Blue. The deep blue gave that car a classy look and allowed it to stand out among other Foxes. Rob Acevedo of Naples, Florida, laid down the paint and he knocked it out of the park! The truly impressive part is the car was painted in a tent in Rob's backyard.

The engine started like as a 2014 Mustang GT engine, but the rotating assembly was quickly replaced, the cylinder heads upgraded, and 30 pounds of boost were supplied by the Precision 82mm turbocharger.

Another important aspect of any project are the wheels. When it came time to pick rolling stock, David decided on a set of Champion wheels. A pair of 15x3.5 wheels with M&H tires resides up front, while 15x12s with 325/50R15 Mickey Thompson ET Street Rs live (for a short time at least) in the rear. A mix of Wilwood and Moser brakes sit in the corners and do a stellar job of bring the fun to a halt when needed.

And now for the moment we've all been waiting for! When the Coyote was announced in 2010, no one knew the impact it would have on the Mustang world. Until this point, the Four-Valve 4.6L was the king. Sure the 5.4L from the GT500 could make just as much power, unfortunately the sheer size of the engine made fitting them into the Fox body engine bay tricky. But the Coyote was a game-changer!

A slew of UPR Products suspension components help this monster bite the pavement. The car has been a best E.T. of 7.72 @ 174 mph with a 1.16-second short time.

For power production, David turned to Ronnie Crawford in Miami, Florida and the build began. The engine started life as 2014 Mustang GT engine, but little would remain from its original form. The stock rotating assembly was replaced with a Boss crankshaft, Oliver billet steel rods, and Wiseco pistons. The displacement received a bump from 302ci to 305ci with a boost-friendly 9.5:1 compression ratio. The factory cylinder heads were sent to Tim Eichhorn at MPR Racing Engine in Boynton Beach, Florida. There, the factory valves were removed in favor of a set of from Ferrea. These would be able to handle the increased heat seen when 30 pounds of boost would be introduced into the engine. The valve springs were upgraded and a set of custom billet camshafts were installed. Soon the cylinder heads were reunited with the short-block, and the engine neared completion. A Holley Sniper Race intake manifold with a FAST 87mm throttle body completed the engine. A Cobra Jet oil pump and a Moroso oil pan ensured oil would be distributed to all the right places, even under the extreme forces seen at the race track.

Boost is a wonderful thing. If you've never had the chance to experience a fast turbo car, we highly recommend it. David shares our feeling on the topic, and employed an 82mm turbocharger from Precision Turbo and Engine to force feed air into the Coyote. The incoming air charged is cooled by a custom built air-to-water intercooled. The entire turbo kit (including the intercooler) was built by Kevin Konchan, it is truly a work of art!

The interior is simple and clean. The all black Fox interior gives the front office a stock feel. The grant steering wheel and Holley EFI touchscreen dash are just a few of the racy touches that hint at this coupe's true potential.

When it came to controlling the engine, David installed a Holley EFI system. The standalone is tuned by John Lund, Jr. at John Lund racing. While exact number were kept secret, we're told the combination made around 1200 horsepower.

Transferring 1200hp through the drivetrain is no small feat. Especially considering the car sees as much street time as it does track time. To handle this much horsepower, David went with a tried-and-true combination from JPC Racing. A bolt-together Neil Chance torque converter transfers power to the JPC spec'd Powerglide from Transmission Specialties. An aluminum driveshaft turns the pinion in the rearend.

When it all came together, you got an absolutely stunning blend of power and beauty. This turbo Coyote Fox have been a best E.T. of 7.72 seconds at 174 mph. And if that isn't impressive enough, it traversed the first 60-feet of the track in a blistering 1.16 seconds!

Unfortunately, as it goes with racecars, things break. An engine failure has temporarily sidelined David and his coupe. But the good news is the new engine is nearing completion and the car should be back on track very soon. The combination will remain similar to what you see in this story, just a bit more awesome. The new engine will be Predator-based. That's right, David is using a block from a 2020 GT500. The 5.2L will be the first that we know of in the wild. David also tells us the 82mm turbo is giving way to a larger 88mm variant to increase power production even further! With a combo this cutting edge, we can't wait to see what the future brings for David and his Fox. 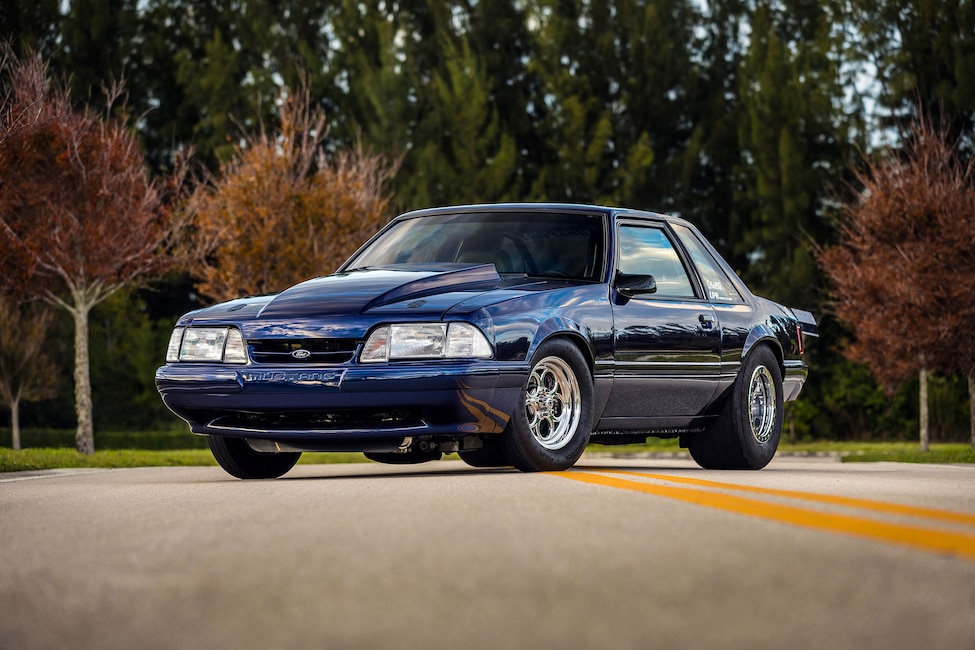 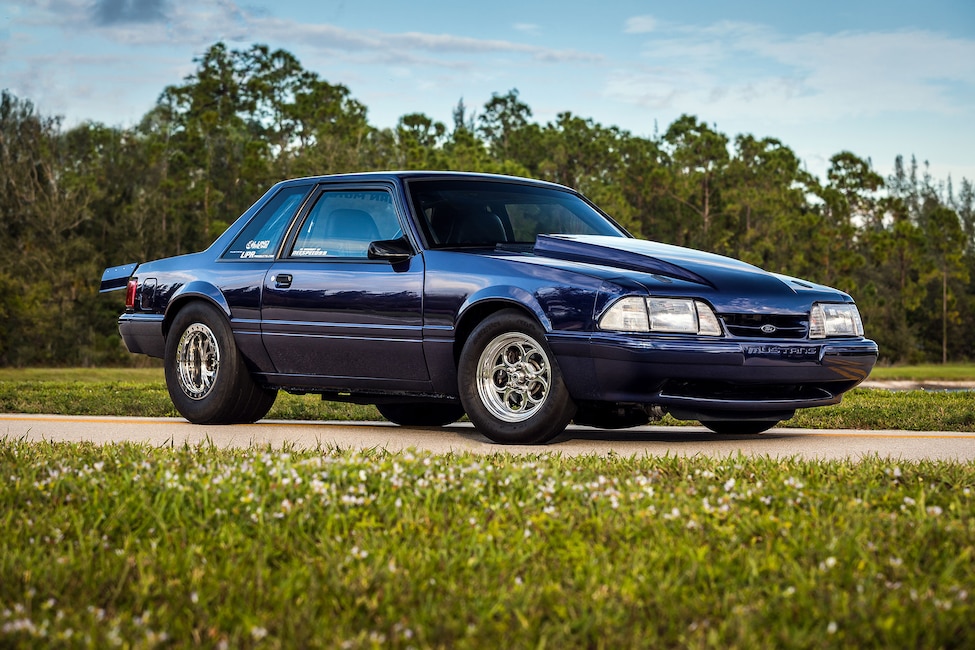 Kona Blue is an elegant, clean color and looks amazing on a fox Mustang. This SSP coupe belongs to David Carpenter and is the culmination of a nearly 8-year that ended in perfection. The car was purchased as a roller and was pulled out of field before the restoration started. David tells us the car was rust-free and a great starting point for this awesome street/strip monster. 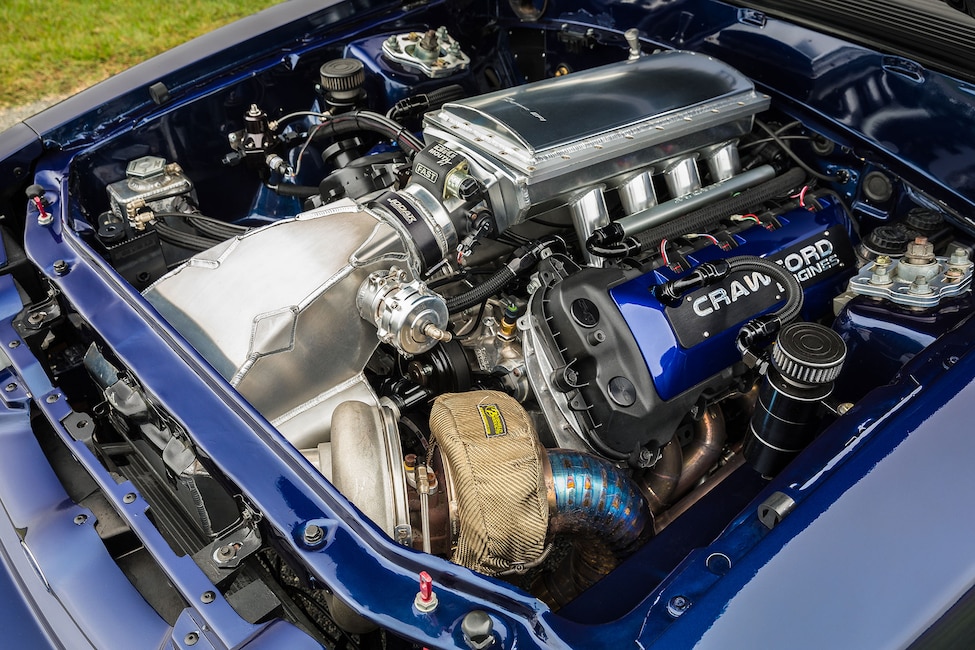 Under the hood lives a boost fed monster. This 305ci Coyote was build by Ronnie Crawford and makes roughly 1200 horsepower. 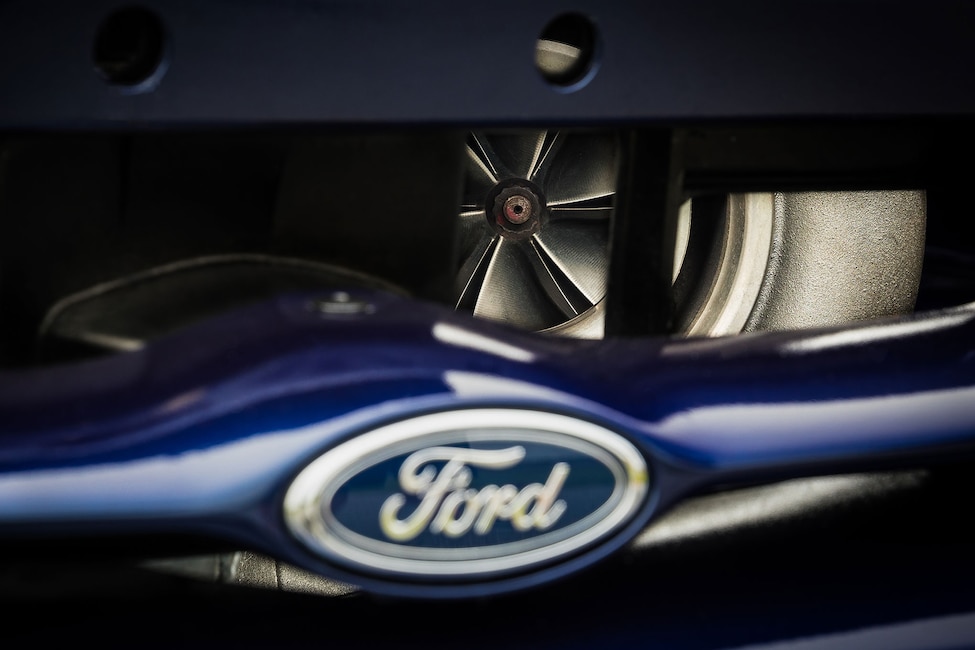 The engine started like as a 2014 Mustang GT engine, but the rotating assembly was quickly replaced, the cylinder heads upgraded, and 30 pounds of boost were supplied by the Precision 82mm turbocharger. A slew of UPR Products suspension components help this monster bite the pavement. The car has been a best E.T. of 7.72 @ 174 mph with a 1.16-second short time. 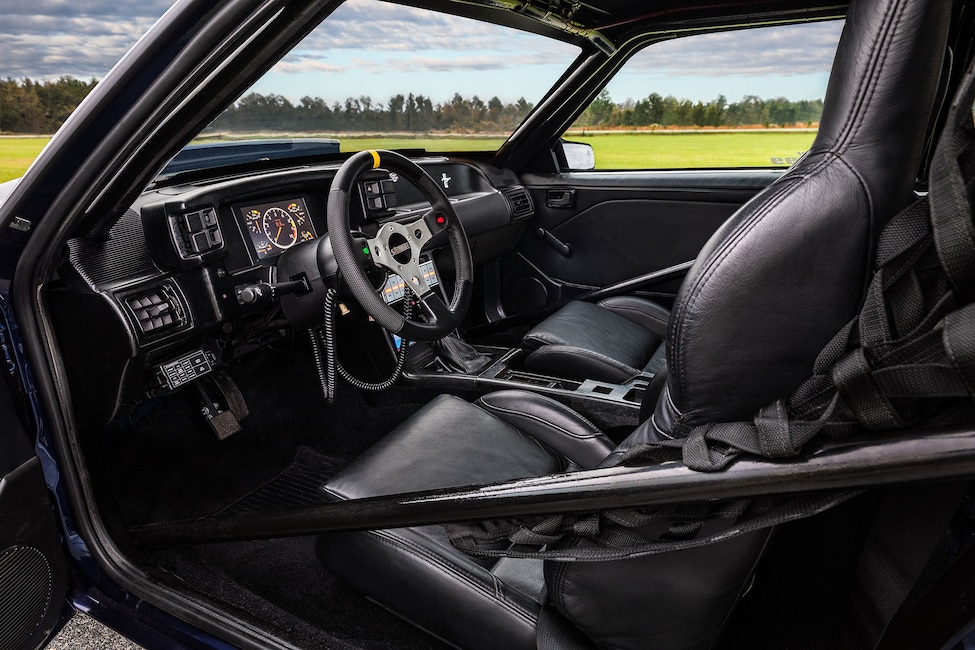 The interior is simple and clean. The all black Fox interior gives the front office a stock feel. The grant steering wheel and Holley EFI touchscreen dash are just a few of the racy touches that hint at this coupe’s true potential. 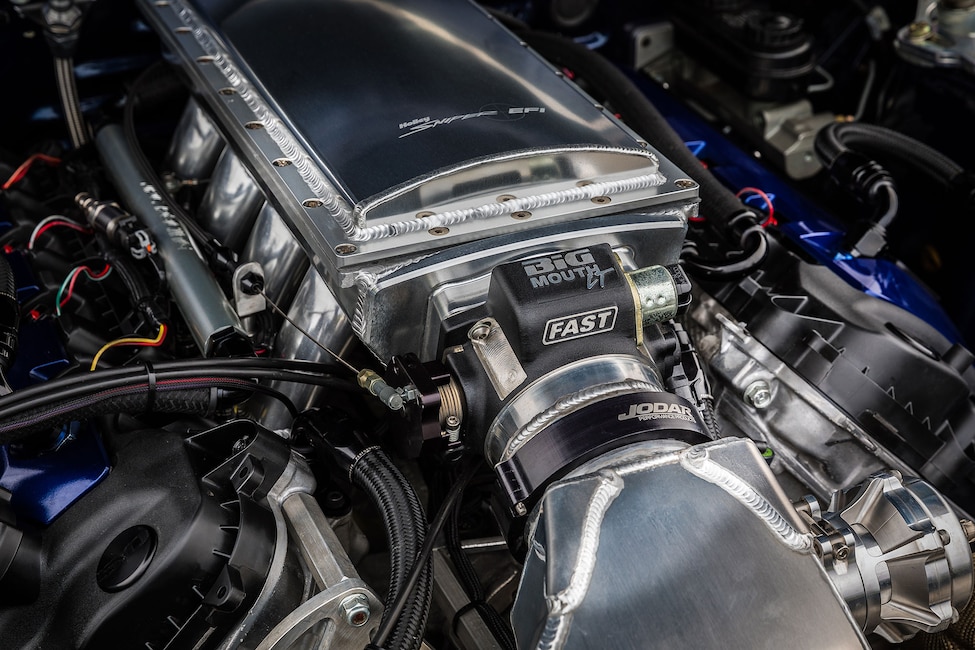 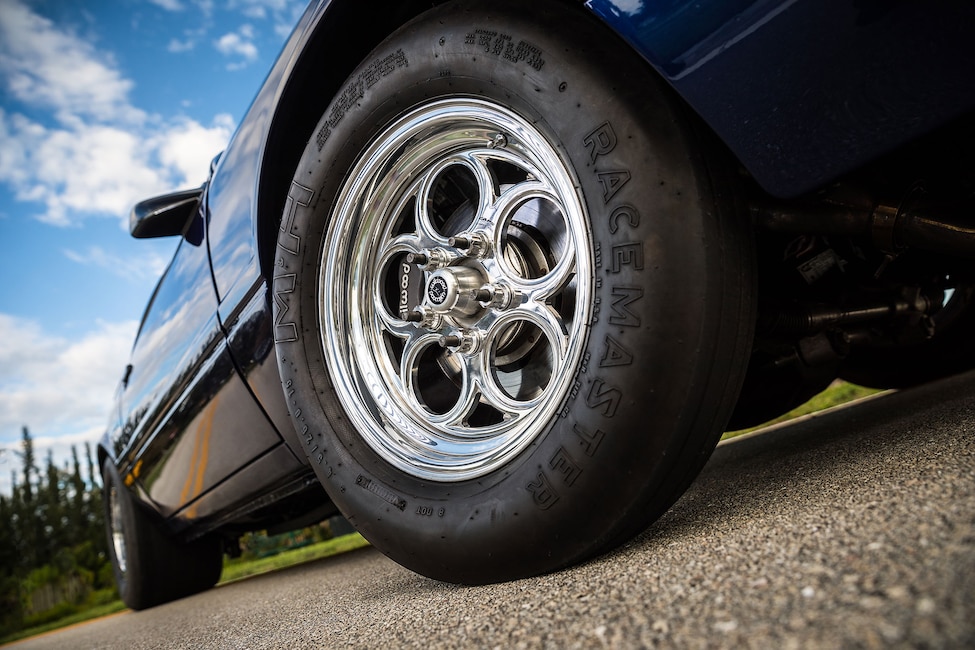 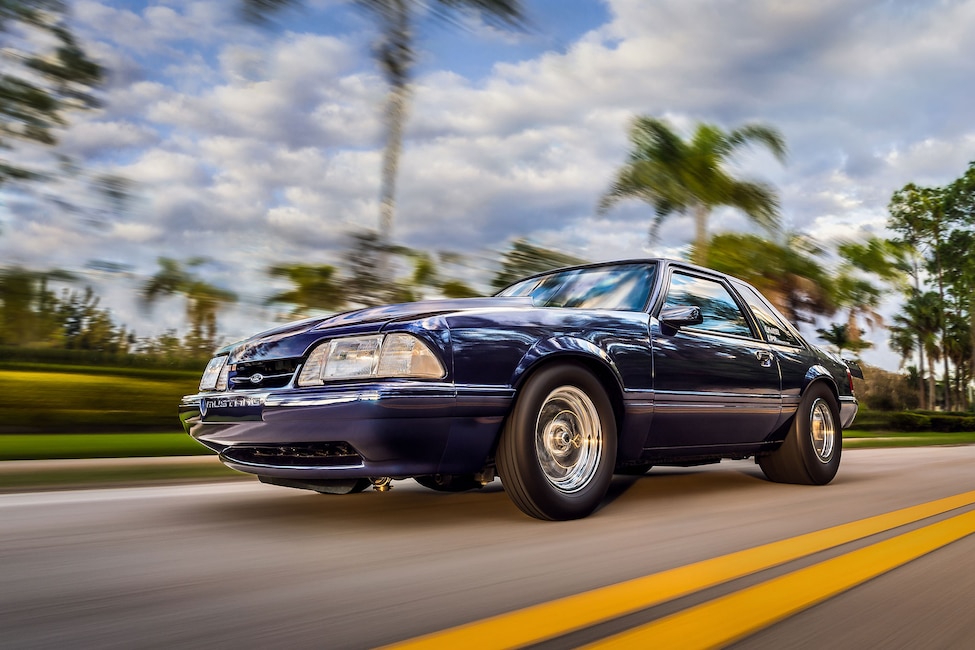 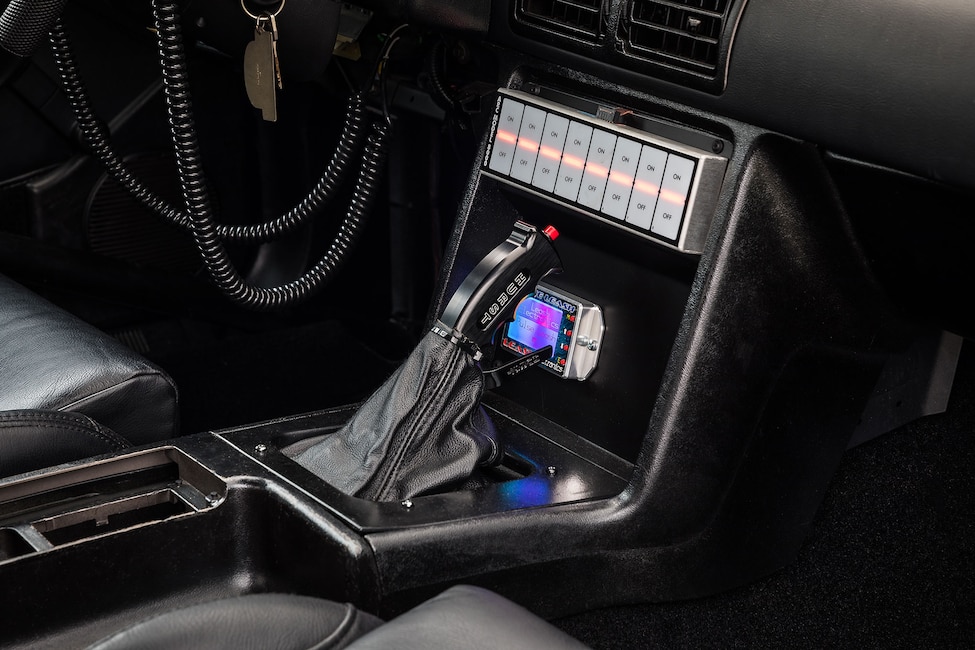 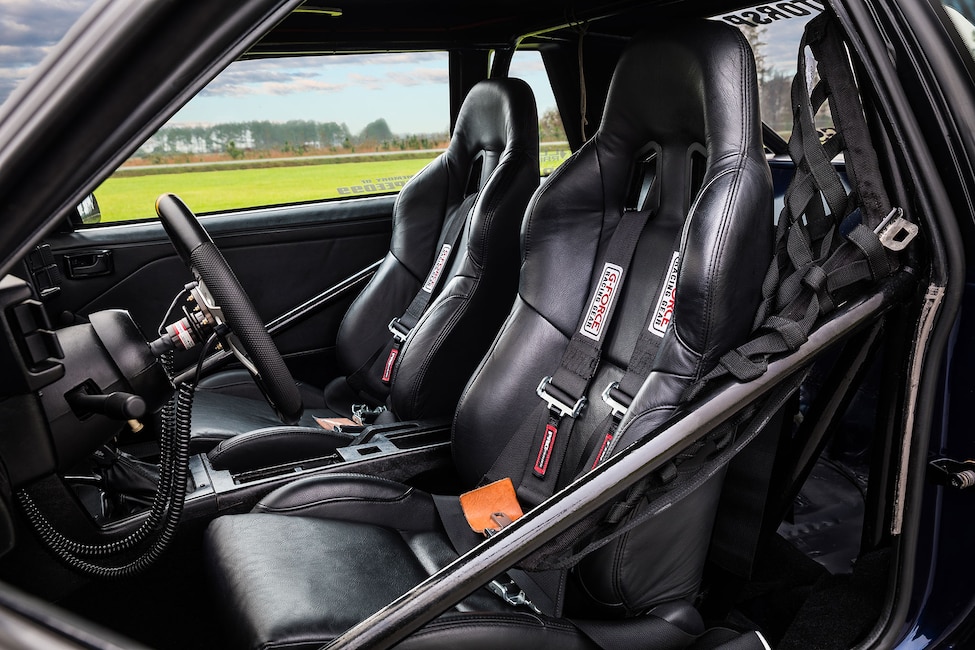 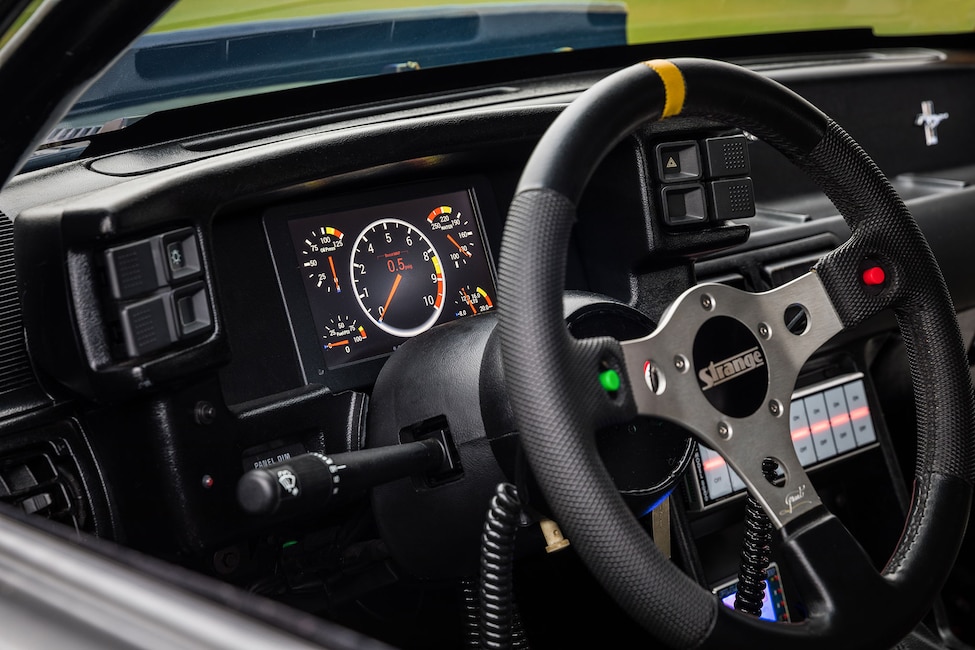 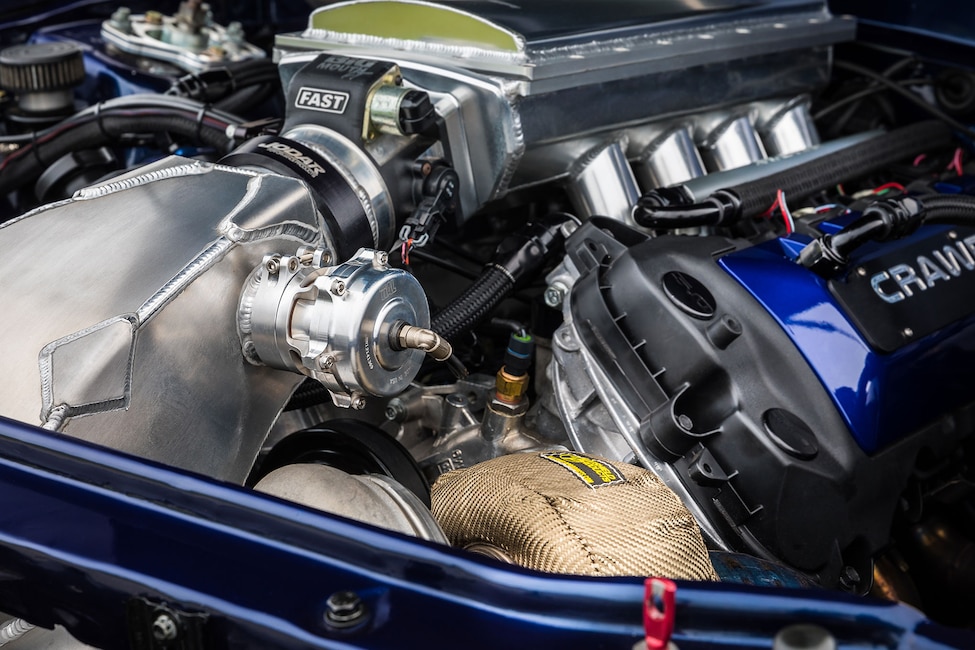 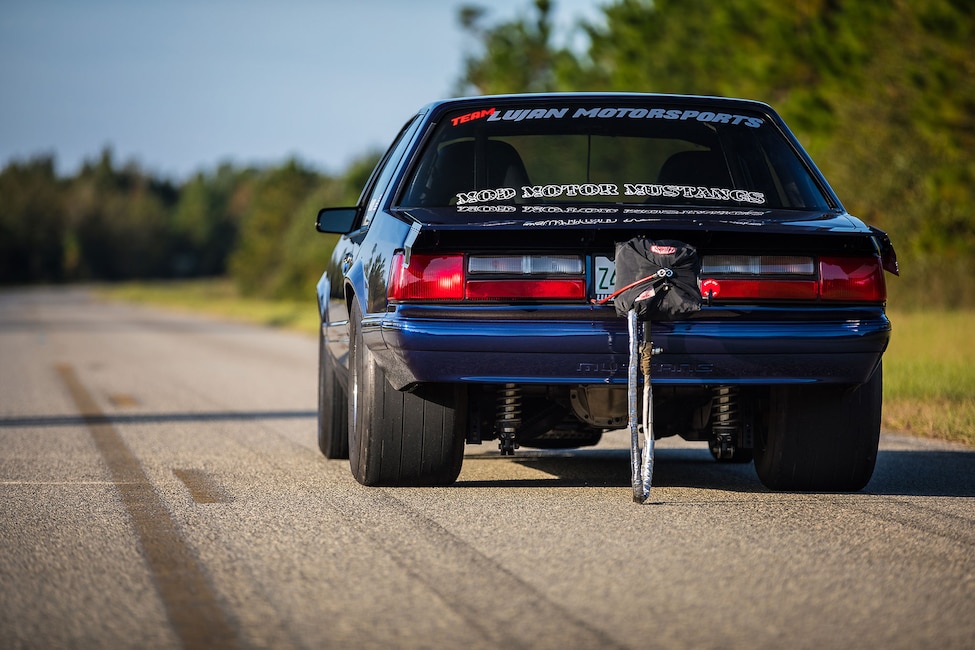 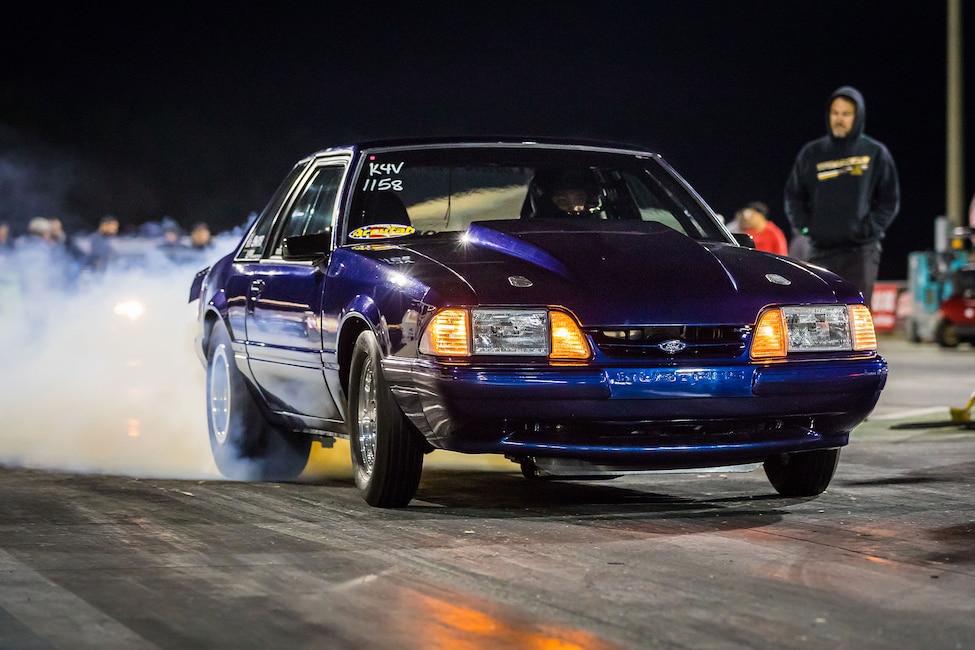 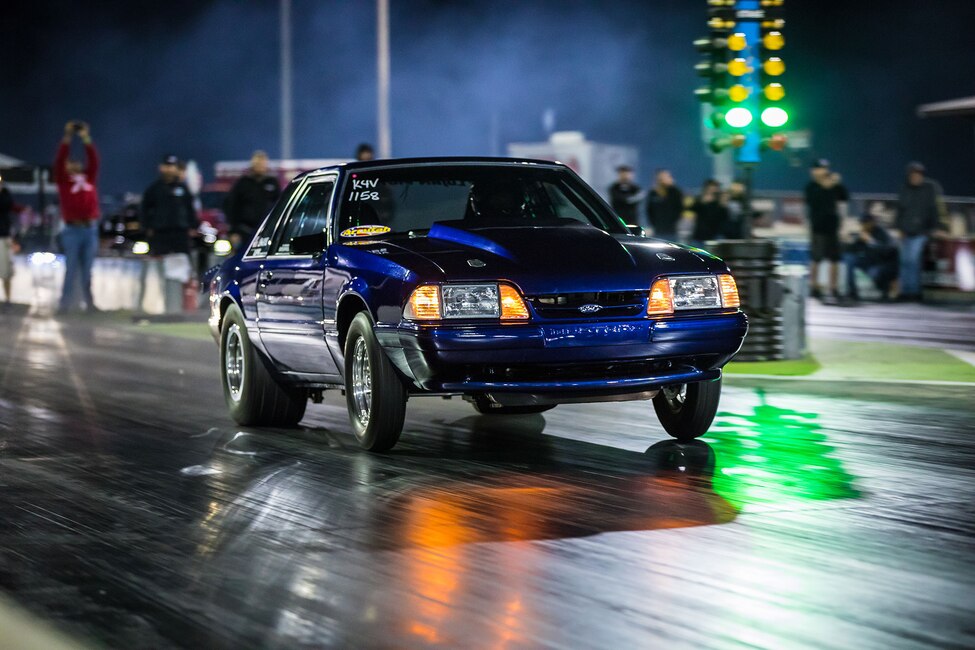