Newsletter
Sign Up today for our FREE Newsletter and get the latest articles and news delivered right to your inbox.
Home
Mustang Monthly
How To
Chassis Suspension 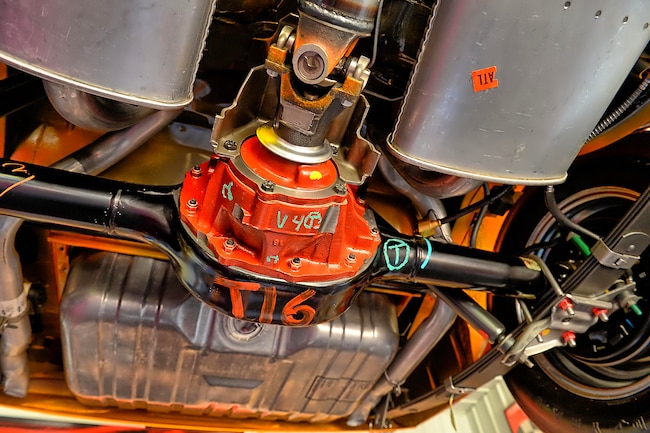 This statement is much truer for the undercarriage than for the engine bay on a classic Mustang. Restoring an undercarriage takes “detective work.” Those are Bob Perkins’ words. That’s why originality is so important to uncover that which is not yet lost.

The undercarriage on Perkins’ 1,600-mile Boss 429 seen here is one of three Boss 429s to win the MCA Thoroughbred Authenticity Award. This car is also a reference for 1965-1973 Mustangs because these models share the same factory procedure. Colors and specific parts will change from car to car, and from assembly plant to assembly plant, but the assembly line process is virtually the same.

Of course, this illustrated guide cannot fully cover an undercarriage restoration because no two cars are alike. Undercarriage restoration starts with detective work, and the more original the car the more evidence that remains, and vice versa. Finding the paint overspray patterns, colors of the primer used, finish on parts, and other details is much easier to uncover on a clean, rust-free car.

A restorer needs to research his own chassis, which means treading lightly during disassembly and paint stripping to uncover and photograph details. Once stripped, the physical evidence is gone forever, so with these cars the best a restorer can do is check out a similar Mustang built at the same assembly plant during the same time frame.

Perkins raised his 1970 Boss 429 on a lift to point out undercarriage details. The vast assortment of parts, primer, and paint on a first-generation Mustang creates a mosaic that is nothing short of automotive art.

Perkins used this original 1970 Boss 429 undercarriage as a general guide to describe factory procedure on a 1965-1973 classic Mustang.
Lower control arms were dipped approximately three-fourths of their length in black paint to leave the ball joint rubber and ends exposed.
Strut rods were always bare metal from 1965-1973.
Tie rods were bare metal, but prior to 1970 they were not this dark because they were quenched in water. The 1970-1973 Mustang tie-rod ends were quenched in oil and turned darker, as seen here.
The sway bars on Mustangs assembled at Dearborn were always painted semi-gloss black. Paint marks can be discovered on original cars, but a buildsheet can help with these color codes for a specific car.
Spindles were bare-finish steel, but heat-treated, which gives them a darker gray look.
The four-speed Ford Top Loader and bellhousing were bare cast iron.
The transmission crossmember was bare metal, with heat marks where the bracket was welded onto the cross member (Boss 429 only). The transmission insulator for this 1970 Boss 429 had a green paint identification mark.
The exhaust H-pipe and inlet pipes were bare, cold-rolled steel—no plating, no finish.
They put the FoMoCo stamp in flat metal and then pressed out the clamp, which distorted the FoMoCo logo.
Mufflers on the Bosses were aluminized, and most Mustang mufflers were aluminized.
Driveshafts were bare metal. The buildsheet lists the colors of the paint rings. Often, cleaning the driveshaft will reveal traces of the marks to figure out the colors.
Boss shocks were always semi-gloss black, and on the Boss 429 they had a paint identification code of one orange and one red daub.
Rear leaf springs were bare metal and heat-treated, which gives them a darker look. There were black insulators between the springs. Notice the paint markings, also available off the buildsheet. The rear sway bar (top) was semi-gloss black with a green paint daub.
The shock plates were bare steel.
Gas tanks and sending unit came with a zinc alloy finish. The hose clamps have “knuckle-scratchers,” named because of their square tabs, whereas new clamps have rounded edges. Tailpipes, visible on both sides of the tank, were aluminized on the ’70 Boss. Clamps and hangers are bare steel. (Perkins left the original service tag on the tailpipe, which would not have been an assembly line item.)
Rear brake drums are bare cast iron with machined edges. (The rubber plug in the brake adjuster hole is stamped with a number of 8A-2092, and the brand of this plate is Bendix. The other side of the car sourced Kelsey-Hayes backing plates, which did not show a number. The digits “3029” written on the backing plate decode as the 302nd day of 1969 (Wednesday, October 29). Perkins says, “It is not uncommon to have a Kelsey-Hayes on one side and a Bendix on the other side.”
Paint sprayed on the body over-sprayed on the bottom of the floors, creating this familiar pattern. Restorers must use their artistic abilities to recreate this pattern, which is a fun part of the hobby. NOTE: Perkins reveals secrets of extreme artistry, including “drippies” and “stretch marks in metal” in our online video.
The factory bolted each Mustang Unibody to a frame skid that was in place when the primer was applied, leaving bare-metal marks, which are part of a Thoroughbred restoration.

On the block selling a G.T. 500 at the biggest automotive auction of the year.

Chestnut Metallic paint might not scream “Brown Boss 302,” but 10 buyers loved it enough to check the color choice on their order forms.

Follow along, and contribute information to, the restoration of one of the most significant Mustangs in history. Launch of Lawman Mustang Website.

Fierce Ford Friday: His & Hers Mustangs

Brad and Christina Muthig and their his & hers Mustangs.