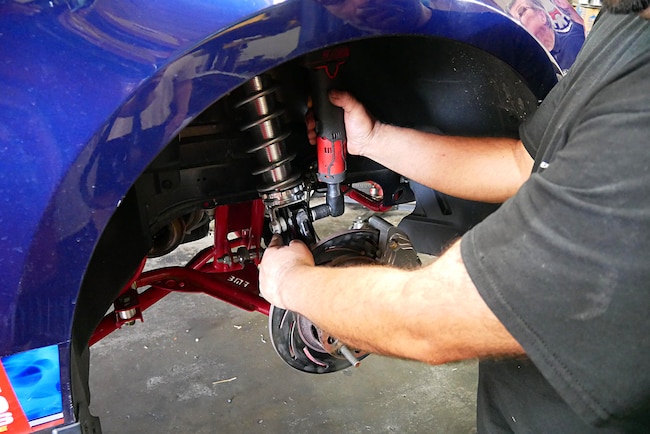 Without traction, nothing else matters in drag racing. More force on the rear tires means more traction. Rear-wheel drive drag cars rely on weight transfer when the car launches to provide additional traction to keep the rear tires from spinning.

Several factors affect weight transfer, including center of gravity, suspension geometry, and suspension damping. Adjustable dampers (struts and shocks on a Mustang) allow drag racers to tailor the weight transfer rate to the needs of their car and track conditions.

Viking Performance, headquartered in Lakeville, Minnesota, offers a trick set of adjustable shocks and struts for 2005-2014 Mustangs. Their struts and shocks are “double adjustable,” which means the damping force in compression and rebound (extension) can be tuned independently via knobs on the bottom of the shock and strut bodies.

Viking offers two different series, Warrior or Crusader. The Warrior series is designed for vehicles mainly street driven with some occasional track use. The Crusader series is designed for use-specific competition vehicles. For our build, we went with the Crusader series. The Crusader struts and shocks provide for 19 positions of compression damping adjustments and 22 positions of rebound damping adjustments. The wide range of adjustment makes tuning a car to different tracks a breeze. Just reach under the car and turn the knobs!

To support our coilovers, Maximum Motorsports sent us a set of their caster camber plates for 2011-2014 Mustangs. They’re designed to support the additional forces coilovers feed into the shock towers.

For this segment, we headed over to GEAR Driven Automotive in Northridge, California, where Saul Gutierrez took the lead and installed the Viking Crusader double-adjustable shocks and struts on our S197 drag car; follow along for the complete details.

1. Starting at the rear, we removed the top shock mount nut.

2. Then, we unbolted the shock from the axle housing and removed the existing shock.

3. The Viking Crusader double-adjustable shocks are direct replacements for the stock shocks, so installation is pretty straightforward. We bolted the bottom of the shock in place and reinstalled the top mount nut.

4. Adjusting the Viking shocks couldn’t be easier. The knobs at the bottom of the shock body adjust the 19 levels of compression and 22 levels of rebound damping.

5. We continued up front by removing the strut-to-spindle bolts.

6. With the bolts removed, we swung the spindle out of the way.

8. Then, we installed the coilover hardware on the Viking strut. First, we threaded the lower spring perch over the strut body.

9. Viking included their optional roller bearing thrust washers that go above and below the springs. We packed the thrust washers with high pressure grease.

11. Then, we installed the top thrust bearing and spring perch.

12. Next, we installed the top thrust bearing into the upper spring perch.

13. Then, we installed the top mount over the strut shaft.

14. Because the spring forces on our new coilover setup go through the strut shaft, we needed to use an upper strut mount designed to handle the increased loads. Maximum Motorsports’s caster camber plates for 2011-2014 Mustangs did the trick.

15. After pre-assembling the Maximum Motorsports Caster Camber plates, we slipped them over the tops of the strut shafts.

16. Then, we installed the upper strut mount nut.

17. Next, we fastened the caster camber plates to the strut towers.

18. The Maximum Motorsports caster camber plates support the forces of the coilover setup as well as allowing wider alignment adjustments.

19. The Viking coilover strut package also saves weight and space over the OEM setup. Viking is one of the few companies that provide an all-aluminum strut, as compared to a steel strut with a threaded aluminum sleeve.

20. We finished the installation by installing the strut mount to spindle bolts.

21. Our front and rear now have purpose-built drag struts and shocks so we can tailor the weight transfer on our 2011 Mustang for better launches at the track.

For our purpose-built drag racer, we needed a no-compromise wheel and tire package. Weld’s Alpha-1 and V-Series wheels fit that bill perfectly.

The Alpha-1 rear wheels feature WELD’s cut-weight-at-all-costs hubless design as seen on their NHRA Pro Stock, Funny Car, and Top Fuel racing wheels. Our Alpha-1 wheels are aimed squarely at customers like us: sportsman racers competing in the radial and small tires classes. Weld sent us a set of 15x10 with a 5-inch backspace and a single bead lock. They fit our 26.0 x 8.5-15 M/T drag radials perfectly.

Up front, we chose Weld’s 17-inch V-Series 1-piece Frontrunner wheel with a matching 27.5 x 4.0-17 tire. Not only does it take critical weight off the front of our car, but it looks fantastic.

Ashley Barnes is the Co-president of Sinister Society, a female Mustang club based out of Southern California and who better to tell her story than Ashley herself.