Newsletter
Sign Up today for our FREE Newsletter and get the latest articles and news delivered right to your inbox.
Home
Modified Mustangs & Fords
How To
Chassis Suspension 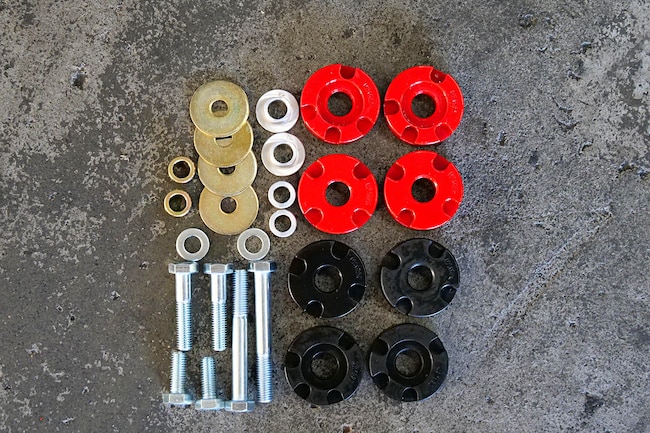 Rubber bushings are squishy. They do a great job absorbing annoying vibrations, but they also allow things to move around under load. Sometimes too much for our liking. When we drive our Mustangs aggressively, the rubber bushings in the drivetrain “wind up” under load and then release that energy when the tires break traction. When this cycles back and forth between traction and slip, drivers describe this as “wheel hop.”

Aftermarket companies that cater to enthusiasts like us know that we care less about reducing vibration and more about putting the power to the ground quickly and smoothly. That’s where Steeda Autosports comes in. Their latest offering to stiffen up the connection between the differential and the rear suspension for S550-chassis Mustangs is their Steeda Mustang Differential Bushing Insert System.

In addition, the Steeda Mustang Differential Bushing Insert System installs in a couple hours and adds little to no perceptible increase in noise, vibration, or harshness.

It sounded like the right choice for us, so we headed to Gear Driven Automotive in Northridge, CA where owner Saul Gutierrez handled the install.

Get Loud With Roush’s Active Exhaust!

Roush has a customizable after-cat exhaust system that lets you turn your mild-mannered Mustang into a fire-breathing track or show terror.

GForce Performance Engineering Driveshaft and Axle Upgrade for our 2018 Mustang.