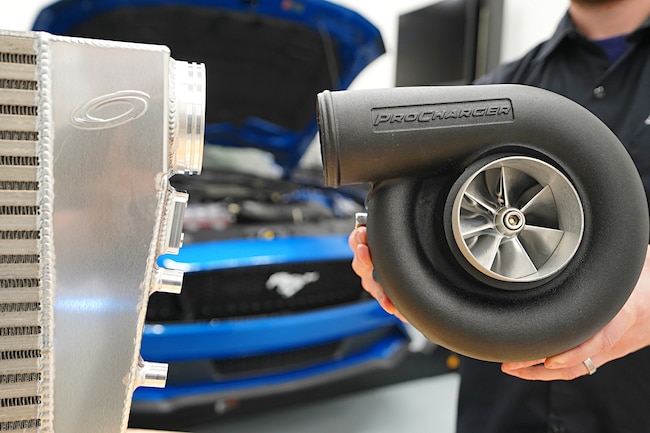 Centrifugal superchargers have been a Mustang mainstay since late-80’s, and Ford’s latest iteration of the 5.0L Coyote engine responds to boost extremely well. There are many ways to lay down big power numbers on a dyno, but the smooth, linear power delivery of a belt-driven centrifugal blower is a fabulous combination on the street.

We already found out how well a ProCharger P-1SC blower kit performs on an otherwise stock 2018 Mustang (MM&FF, November 2018), but the folks at ATI ProCharger in Lenexa, Kansas wanted to know what one of their P-1X Stage 2 setups would do on a new direct-injected Mustang burning E85 ethanol.

Their test subject was a 2019 Mustang GT belonging to Chase Lautenbach and features a Fore Innovations fuel system with Deatschwerks 95 lb/hr injectors supplying a steady diet of Ignite E85 ethanol fuel. For this test, the team at ProCharger installed one of their upgraded P-1X head units. The P-1X uses the same self-contained gearcase of the P-1SC, but adds an upgraded compressor that produces more power at the same boost level. It’s a win-win, as the P-1X is a direct replacement for the standard P-1SC blower.

The rest of the kit is typical of ProCharger’s “Stage 2” systems, including the 75% larger 1,103 square-inch intercooler to chill the intake charge more effectively at higher boost levels. The Stage 2 system also utilizes a dedicated 8-rib pulley system, which spins the blower with its own belt rather than running off of the engine’s existing 6-rib accessory belt.

With a 3.50-inch pulley to netting 16 psi of max boost, the 2019 made an impressive 900 horsepower and 675 lb-ft of torque. Given the relatively simple combination, there’s no other way to describe the results other than jaw-dropping.

Follow along as we hit the highlights of the installation process.

On this 2019 Mustang GT, ProCharger installed and tested their P-1X Stage 2 system that features the company’s upgraded P-1X blower unit in optional black finish and the larger 1,103 square inch intercooler. (The car already had an upgraded fuel system including 95 lb/hr fuel injectors installed.)
The installation process began by removing the OEM engine cover.
Next, the ProCharger crew removed the front undercladding to gain access to the bottom of the engine compartment.
Next, the front facia was removed to facilitate access to the front of the Mustang.
With the front facia out of the way, the ProCharger crew removed the radiator shutter assembly.
Next, they drained the engine coolant and set it aside.
While the coolant was draining, the radiator shroud was removed.
ProCharger’s Stage 2 systems use a dedicated 8-rib pulley system to drive the blower. Here, the ProCharger crew attached the supercharger system’s piggyback crank pulley to the factory harmonic damper.
The supercharger system interferes with the factory thermostat housing, so ProCharger includes a replacement that orients the radiator hose connection for clearance.
Next, the ProCharger team installed the supercharger sub-bracket to the Coyote’s front cover.
Next, they fastened the supercharger bracket’s standoff to the alternator.
Here’s the assembled supercharger mounting bracket showing the supercharger tensioner pulley adjuster.
Next, they transferred the MAF sensor from the factory air intake tube to the ProCharger Stage 2 air-to-air intercooler.
ProCharger offers two intercoolers: a 630 square-inch unit in their “H.O.” kits, or this 1,103 square-inch version in their “Stage 2” systems.
After relocating the electrical harnesses, the ProCharger crew fastened the intercooler to the front bumper support.
The ProCharger crew installed the tubing and hoses connecting the intercooler to the throttle-body.
Next, they installed the included coolant reservoir.
ProCharger offers this upgraded “race” surge valve for competitive applications. After relocating the factory air bag sensor, they installed the valve.
With the coolant reservoir installed, they refilled the system with the coolant they drained earlier.
After installing the P-1X supercharger blower to the supplied bracket, they adjusted the spring-loaded belt tensioner to spec.
The black finish ProCharger P-1X blower fits right at home in this 2019’s engine compartment.
The final piece of the puzzle was to install the supercharger inlet tube and large, reusable air filter.
The ProCharger crew finished the process by reinstalling the front facia, undercladding, and engine cover.
After starting the engine and checking for leaks, it was off to ProCharger’s in-house Dynojet dynamometer for tuning and testing.
With a tank full of boost-friendly E85 fuel, this mostly stock 2019 Mustang GT spun the rollers with 900 horsepower and 750 lb-ft to the wheels. Only 16 psi of boost was required to hit the numbers. With smaller pullies available, there’s room to make even more. And while the dyno numbers are impressive, how did it do at the track - 9.6 at 148 mph!

When we left off last night in our Week To Wicked 1990 Mustang LX Sport project, we had just removed the stock engine and transmission and installed most of the Maximum Motorsports suspension.

This 1968 Mustang fastback took a long path to completion after a family’s loss, but it is now an incredible restomod.

Readers share the story and pictures of their muscle Mustangs and fast Fords. Gene Eckert and his 1990 Mustang GT from Baltimore, MD.