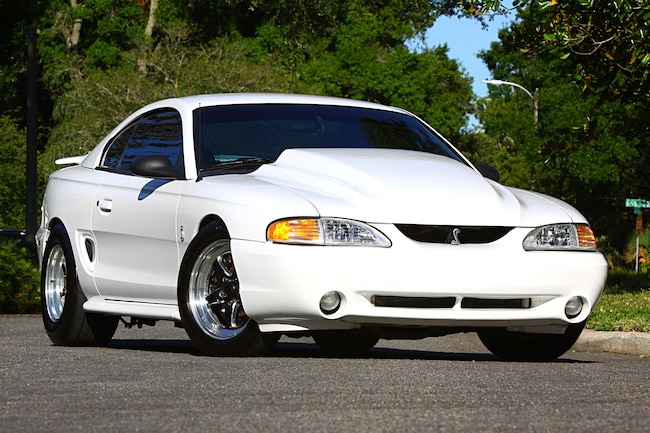 Ever since purchasing our 1994 Cobra around Thanksgiving of 2017, we've steadily been working on it to make it more street-friendly. Power by the Hour and MPR Racing Engines worked together to get the car up and running again with a rebuilt engine with new JE pistons. We turned down the boost, and added Mickey Thompson Sportsman S/R radials up front with the company's ET Street S/S radials out back, but there was still more to do. Our Cobra didn't have a front sway bar, and it needed a new inner tie rod, subframe connectors, and a quieter exhaust. In a nutshell, we were trying to make the car a better daily car, so we visited Steeda Autosports' Valdosta, Georgia location to make that happen.

Prior to the install, we checked in with Steeda's Scott Boda, Director of Manufacturing and Plant Manager to go down a checklist of what would be added to the car. When we first purchased the car, it had more of a drag racing demeanor, but the majority of the parts on the car were well-sorted. However, some needed to be replaced, whereas other components needed to be added.

Starting up front, our Cobra didn't have a sway bar. The car's former life involved many trips to the drag strip where it ran 6.70s in the eighth. We have no doubt the lack of a sway bar helped, but with a daily car, having a front sway bar certainly helps in the handling department. With skinnies and the lack of a front sway bar, taking corners was an exercise in deliberate patience. Also, the car's passenger side inner tie rod end was bad, and Steeda was able to remedy that issue, as well. In total, up front we added Steeda's front sway bar (PN 555-1094; $189.95), light-weight sway bar brackets (PN 555-8109; $178.95), sway bar spacer kit (PN 555-8124; $49.95), and a new passenger side inner tie rod end.

In our Cobra's midsection, when we bought the car we were surprised it didn't have subframe connectors. In talking to a couple of the car's previous owners, both said subframe connectors were on their list of add-ons, but they never got around to installing them. "It ran 6.70s without them," former owner Jared Davis jokingly said. The car's original builder, David Smith, who is credited with performing the Terminator swap, was too busy with other aspects of the build to install subframe connectors. It was up to us, and Steeda Autosports (PN 555-5245; $169.95) to remedy that shortcoming.

Lastly, out back the car already had Steeda adjustable upper control arms and the factory sway bar, but Boda recommended the company's Weight Jacker adjustable rear lower control arms (PN 555-4410; $419.95) and Steeda's upgraded sway bar (PN 555-1085; $224.95) to go with them. Steeda's Weight Jacker rear lower control arms feature a one-piece billet construction designed to virtually eliminate deflection under hard acceleration and cornering. The Weight Jacker control arms are extremely sturdy, but without the added weight. The great thing about the Weight Jacker to us is that we can adjust our Cobra's ride height out back. With our desire to go between a drag tire setup and a street wheel combination, that feature will come in handy in case we need to adjust ride height between wheel combinations.

To further accentuate the car's drag race demeanor, it featured a dumped exhaust in front of the rear axle. For a weekend warrior, sure, dumps are fine. However, on a daily car, dumps can get on your nerves. Our Cobra is a daily driver. Therefore, the dumps had to go. We still wanted a muscular sound so we didn't wander too far off the grid with our choice of exhaust. Steeda carries Flowmaster Performance Exhaust systems so we decided on that company's Force II cat-back system (PN 17114; $449.95).

With all these improvements, the second we hit the key we could tell a huge difference with our Cobra. With the welded subframe connectors, which also allowed us to have the transmission crossmember welded in, we instantly felt a difference. Our Cobra felt tighter, more connected front to rear. This was even before the Flowmaster exhaust was added to the car. The car just had the headers and X-pipe on it at that moment, but we could already feel the improvement.

Once we added the Flowmaster exhaust and took the car for a ride, the improvements further made themselves known. Before adding the Steeda suspension improvements, our Cobra didn't like taking corners. In fact, prior to adding the Steeda components, we had a run-in with a sport bike, but shortly after getting into the gas, a turn was coming up so we had to get way out of the throttle, letting the bike get away. That's fine, though, we don't like to play around too much on the street, anyway. However, with the new Steeda suspension additions, and even with the Mickey Thompson S/R skinnies up front, we can go into the turns with way more confidence than before.

No, our Cobra isn't going to win any autocross championships, but compared to before, our confidence going into the turns is way higher. It's also more stable going down the road, as well. Unfortunately, the quieter exhaust did bring other problems to light. Most notably, our Cobra's gears need a redo. With the dumps, that noise wasn't as prevalent, but afterwards, that noise is way more intrusive than before.

With any Mustang, you guys know how it goes; you're never actually done working on it. Up next, gear swap. Until then, we'll continue to enjoy the Cobra's new Steeda Autosports suspension upgrades.