Newsletter
Sign Up today for our FREE Newsletter and get the latest articles and news delivered right to your inbox.
Home
Muscle Mustangs & Fast Fords
How To
Drivetrain 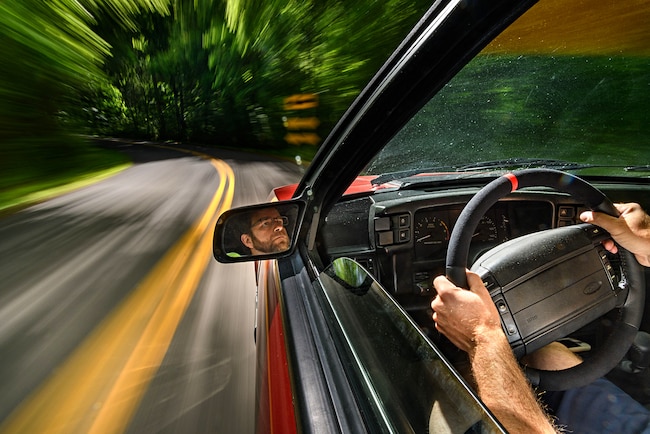 It's hard to believe, but 1979-1993 Mustangs are becoming "classics," which means they suffer from "classic car problems." When Fox Mustangs (and, admittedly, their fans) were younger, enthusiasts were typically replacing perfectly-functioning stock parts in favor of higher-performance replacements. These days, aftermarket parts are replacing stock bits that are worn out too.

Take the subject for a Steeda Stage 1 Suspension upgrade: a heavily-loved 1991 Mustang GT that's logged over 110,000 miles. Over the past 28 years, its stock springs sagged so much that its front ride height was noticeably lower than stock. The collapsed spring isolators and stock spring rates left the suspension sloppy and chassis lazy.

To resurrect this Fox Mustang's handling, we called on the vast experience of Steeda Autosports. They've been improving Mustangs for over 30 years, so we knew they'd have a package that addressed the shortcomings of our aging Fox chassis without going overboard.

To that end, Steeda's G/Trac Stage 1 Suspension Package fit our needs perfectly. The package includes Steeda's Sport Lowering Springs to level out our ride height for less body roll while maintaining a comfortable ride. To bring our camber back into spec and add caster, Steeda includes their Caster Camber plates. The plates' spherical bearings also sharpen the chassis' response by eliminating deflection at the top of the strut. Speaking of deflection, Steeda also includes their Strut Tower Brace and lower G/Trac brace to further stiffen the chassis and make it more responsive. We added polyurethane spring isolators to the mix, since our Mustang's stock pieces were worn out.

While installing Steeda's G/Trac Stage 1 Suspension Package, we were reminded how easy these Mustangs are to work on. Even pausing to take photos, we had the installation completed in a day. After doing an at-home alignment, the G/Trac Stage 1 kit not only firmed up the ride and handling of this 1991 GT, but the chassis felt tighter and more responsive. We even heard fewer creaks from the dashboard area, which was a pleasant surprise. The added caster from the Steeda Camber Caster plates also improved the steering's feel on-center, especially when cruising down the road.

Steeda's G/Trac Stage 1 Suspension Package for 1979-1993 Mustangs includes Sport Lowering Springs, Strut Tower and lower G/Trac braces, and Caster Camber plates. We also added polyurethane spring isolators to replace our worn-out factory pieces.
We started the installation at the rear. First, we supported the rear lower control arm pivot with a jack and removed the rear sway bar. After removing the rear control arm axle pivot bolt, we slowly lowered the control arm to relieve the spring pressure.
With control arm lowered, we removed the stock rear spring and rubber isolators.
With the stock rear springs removed, we compared one of them (left) to a rear Steeda Sport Lowering Spring (right). Not only is are the Steeda springs shorter, but they appear to be progressive (get stiffer as the spring compresses).
Before installing the rear Steeda Sport Lower Springs, we installed the new polyurethane spring isolators on the lower control arms.
With a fresh polyurethane isolator on top, we installed the rear Steeda Sport Lowering Springs.
After jacking up the back of the rear lower control arm and inserting the bolt, we torqued the bolt to 85 ft-lb.
Installing the rear sway bar finished up our work in the rear.
Moving up front, we unbolted the brake calipers and hung them out of the way.
We then freed up the front sway bar by removing the end link's top bushing.
With a floor jack supporting the front control arm, we removed the strut-to-spindle bolts.
After slowly lowering the control arm, we used a pry bar to pop the spring free of the spring pocket. (Warning: Stand aside and use a pry bar! The spring is still under pressure and can hurt you if a body part you value is in the way.)
With the spring free, we removed it and the upper isolator.
With the stock front springs removed, we compared one of them (left) to a front Steeda Sport Lowering Spring (right). The Steeda springs are slightly shorter, which lowers the car and makes them easier to install over the factory counterparts.
Before installing the front springs, we went about removing the stock upper strut mounts. First, we removed the strut top nut. (Tip: If it's stubborn, a quick hit with an impact wrench will knock it loose.)
Next, we removed the alignment nuts and the remaining parts of the upper strut mount.
Then, we installed the lower stud plate, spacers, and Steeda Caster Camber plate.
Next, we installed the strut bearing spacers in the order recommended by Steeda's installation instructions and tightened the strut shaft nut.
After installing the polyurethane isolators on the front springs, we used a pry bar and the floor jack to ease the spring back into the spring pocket while jacking up the control arm.
With the floor jack supporting the control arm, we installed the strut-to-spindle bolts and torqued them to 148 ft-lb.
After reinstalling the brake calipers and sway bar end links, we prepared to install the strut tower brace by removing the windshield wipers and cowl vent cover.
Next, we laid the strut tower brace in place in the engine compartment.
With the strut tower brace laying in position, we marked where to drill the mounting holes.
After center punching the holes and drilling a 1/8-inch pilot, we used a stepped drill bit to enlarge them to 5/16-inch.
With the holes drilled, we installed the hardware in the strut towers and the cowl.
After the necessary holes were drilled, we installed the lower K-member brace.
With the car back on the ground, we set the camber to -1.0 degrees for spirited street driving.
Here's a ride height comparison between the stock (albeit saggy) springs (top), and the Steeda Sport Lowering Springs (bottom). The Steeda springs lowered and leveled the ride height of this 1991 Mustang GT.