Newsletter
Sign Up today for our FREE Newsletter and get the latest articles and news delivered right to your inbox.
Home
Muscle Mustangs & Fast Fords
How To
Drivetrain

Setting up Ford Performance's 5.3L Modular Short-Block for Supercharging and Other Boost Activities 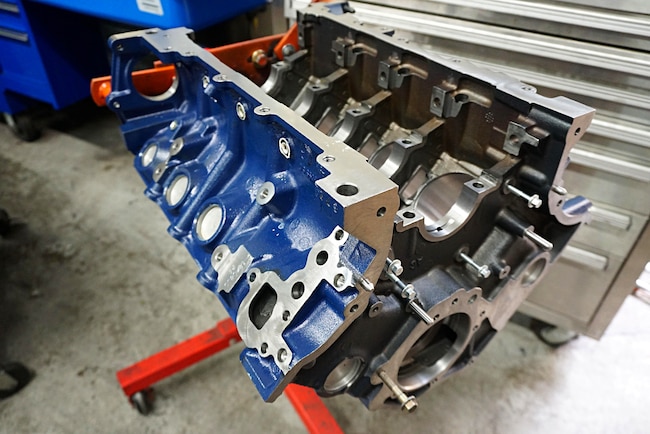 Ford Racing has been an innovator in developing aftermarket engine systems that allow engine builders express their creativity. Their 5.3L Mod Motor crate short-block is one of their best. This short-block is terrific in "as delivered" form allowing builders to simply strap on cylinder heads, camshafts and fuel injection and head down the road. But for those looking to develop something special, this short-block is up for whatever you can throw its way.

With the mindset that we wanted to still be able to run pump gas where possible, we decided to install lower compression pistons to replace the original 10:1 compression Mahle pistons that come with this engine. That's not because there is a problem with the Ford-installed Mahle pistons - not hardly. But we knew that with a 10:1 compression engine, we would have to add additional measures to protect against detonation such as an intercooler or backing off the timing; the latter of which would also greatly decrease our power output. By lowering the compression, we could still run on pump gas (dependent on how much boost we added) and ultimately achieve more power than we could by supercharging a 10:1 engine.

A Note About TFS Cylinder Heads

TFS has been in the engine component business for several decades now and knows a ton about Ford engines from years of testing, tuning and general engine experimentation. Their newest "Twisted Wedge" cylinder heads for both the Romeo and Windsor 2V engines are a "total departure" from standard. TFS redesigned the head by moving the combustion chambers and intake valves to the opposite side of the camshaft (opposite to the factory orientation). According to TFS, this change results in a major improvement in mid-lift airflow as well as piston-to-valve and piston-to-bore clearance. Equipped with a single beehive-type valve springs and Chrome Moly spring retainers, these represent a great bolt-on-and-go option for "mildly modified engine" applications.

The above noted benefits really come into play when using higher lift camshafts and oversized valves to generate higher horsepower and torque. Other cylinder head design benefits include a 3/4-inch deck surface to provide better head-to-block sealing and high flow near CNC-level intake and exhaust runners with CNC-profile combustion chambers.

To be totally clear, the only parts that we changed from the way Ford Racing delivered our 5.3L short-block were the pistons, piston rings and bearings - the rest of the engine remained intact. That's how much we like this engine, a fact that should be clear by now. Of course, our total engine assembly was rebalanced, because of the new pistons, by QMP Racing Engines, our go-to company for these critical engine prep operations.

We disassembled the 5.3L Ford Mod-Motor and carefully checked everything for proper clearances and condition. Not surprisingly, everything was exactly as ordered. A comparison of the Ford-installed Mahle pistons and the new custom-made set of Mahle pistons that would replace them revealed several obvious differences, most notably in the height of the wrist pins.

On the higher compression Mahle pistons, the wrist pin was lower in the piston body when measured from the piston dome. For this reason, and the slightly different design of the dome, final compression dropped about on point as noted earlier moving the piston about 0.015-inch lower in the cylinder bore as well.

If you haven't assembled a Mod Motor, you've missed out a super strong engine upgrade when compared to classic Ford Windsor and Cleveland engines. It should be noted that our 5.3L engine is not the much-lauded "Cobra block" so loved by racers that features the four-bolt main system. Our engine had two bolts to hold the main cap in from the bottom of the block and also two side bolts that further reinforce the crank placement (another benefit for our power-adder directive).

While classic engine designs feature main caps that simply drop in place, the Mod Motor design requires you to line up each main cap and tap them down into the block with a dead blow hammer before bolting in place. To further bulletproof the bottom-end, we used ARP Bolts and torqued them in place as per Ford Racing specs.

Follow along as we prep our Ford Racing engine for supercharging. Along the way we will show you some of the techniques we used to build our Mod Motor, courtesy of the fine folks at Gear Driven Automotive. Hosted by owner Saul Gutierrez, we carefully assembled an engine that was more than ready for its future performance tasks.

-Designed for 2, 3 or 4 valve cylinder head combinations (piston-to-valve check required depending on camshaft)

-Assembled and ready for your heads, cam, and timing set