Newsletter
Sign Up today for our FREE Newsletter and get the latest articles and news delivered right to your inbox.
Home
Modified Mustangs & Fords
How To
Drivetrain 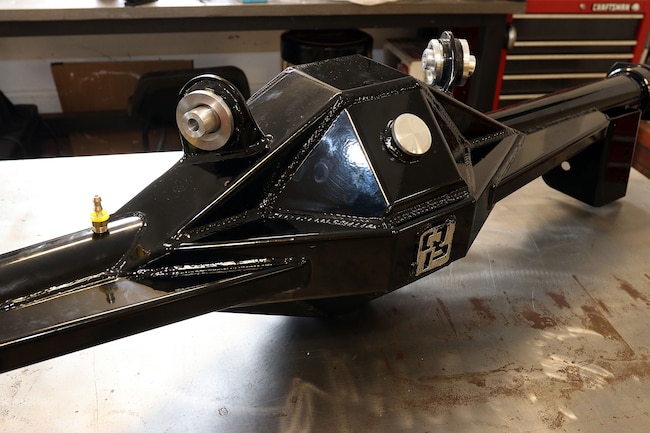 Jeff Huneycutt
December 13, 2018
After a few conversations discussing out plans for the Fake Snake Mustang, Quick Performance put together this nine-inch rear end perfectly suited to our needs. It includes beefy axles, a center section with an Eaton Truetrac posi, and a fabricated housing sized specifically to fit an SN95 Mustang. Note that the bracket bolted to the axle housing is the lower coilover shock mount from the QA1 suspension kit and not part of Quick Performance’s rear end kit.

Truth bomb: Cars that consistently break are no fun.

That's why we've so far taken the slow-and-steady route as we transform Car Craft's Fake Snake project Mustang from run-of-the-mill to ridiculously fun. We've spent time rebuilding the transmission, strengthening the chassis with BMR subframe connectors and torque box reinforcements, and we've made some serious handling upgrades thanks to a complete suspension kit from QA1.

We've got plans to make some ridiculous power in this Mustang thanks to a partnership with Ford, but before we can do that, we knew we had to do something about the stock 8.8-inch rearend currently under the car. After 240,000 miles of service, it was beyond worn. We've already mentioned that it makes a growling sound under load that we suspect is either a pinion or axle bearing about to give up the ghost. Also, the clutches in the limited-slip rear (Ford calls their brand Traction-LOK) were so worn we might as well have been running an open-diff rear.

Pulling the OEM rearend involves little more than getting the car up on jackstands, removing the lines (brake, anti-lock, and parking), and unbolting the four control arms. Just make sure to use a jack to support the rearend housing as you unbolt it. That joker’s heavy!

Driveline specialist Quick Performance had been helping us put together a game plan to rebuild the existing rearend to make it serviceable again, but as they learned more about our plans for increasing both the horsepower and traction thanks to significantly bigger rubber, they told us that trying to keep the 8.8 alive in such an environment would likely be more trouble than it is worth.

Instead, they put together a build sheet for a 9-inch Ford-style rearend that could handle well over 800 horsepower reliably with a limited-slip diff that wouldn't wear out over time. The larger 9-inch ring and pinion set is naturally stronger than the smaller 8.8-inch rear. Couple that with Quick Performance's fabricated housing and quality 35-spline axles and the result is a rearend that can handle significantly more power than the original—even with significant upgrades.

Here’s a look at the stock Ford Traction-LOK system installed in Mustang GTs of this vintage. It is a posi mechanism that uses clutches to lock the rear wheels together, which you can see just behind the spider gear on the right. The problem with this style posi is the clutches will wear over time and leave you with what is essentially an open dif.

Likewise, the Eaton Truetrac limited-slip diff in the new rearend uses a design that not only won't wear out over time but also typically works better in most situations than the stock unit. "In my opinion, it is the best differential on the market," explains Quick Performance's Max Ramos. "The device doesn't ever wear. There are no clutch-type units that can handle the power levels that the Truetrac can, but if you are in the 400- to 700-horsepower range you do have the option of the clutch-type limited-slip.

Compare the previous photo with the center section provided by Quick Performance. This one uses an Eaton Truetrac to provide traction. It “locks” harder as more torque is applied through the pinion, plus there are no clutches to wear out. The ring and pinion is a 3.70 ratio, which is slightly lower than the 3.27 gears installed in the stock 8.8 rear.

"The problem with the clutch type is you still have a system of spider gears just like an open carrier. So the gear system is still trying to do a one-wheel peel, it is still trying to find the path of least resistance. The clutches and springs are basically a band-aid that puts resistance between the two wheels. That's your posi grip. Beside the fact that the clutches will eventually wear out and require a rebuild, the system also can be difficult to work with. The clutches are too stiff when you are trying to push the car around the shop when you don't need any posi, and they might not be stiff enough when you are breaking free in the burnout box.

On the left is the stock 28-spline axle that measures 1.250 inches in diameter. On the right is the Quick Performance 35-spline axle measuring 1.500 inches. Besides the extra girth, the metallurgy is also designed for maximum street performance. Quick Performance’s Max Ramos says it is a 1541H steel with a deep heat treat. It is ideal for street use because while strong it also has a measure of flexibility to allow the axle to twist if the wheels spin because of uneven traction.

"The Truetrac posi completely does away with those issues by using helical gears, or worm gears, to do the work," Ramos continues. "The sets of gears engage at 45-degree angles with each other and meet in the middle like a 'V.' It can be difficult to imagine, but because they meet in that 'V' they will rotate like any other gear but also slide sideways when pressure is put to them.

"So if there is no force coming to the unit, it is 100-percent open. Just like an open carrier—nice and free. Then as soon as you get on the throttle and a load comes to the thing, the teeth on those gears slide into each other and build friction based on how much power is coming down the driveline.

The Quick Performance fabricated axle housing can be built to the width you require and with a variety of mounting flanges to fit a wide variety of chassis. This may be overkill for many applications, but Quick Performance has other options to help save a buck if all this beef isn’t needed.

"That way if there is little or no throttle input you get little to no posi grip. That gives you good street manners. But then when you get on it, the more force going through the driveshaft to the rearend, the stiffer the device gets. So how much throttle you give, the more grip you get—which is exactly when you need it. That's normally way better than the clutch type unit where you get one level of posi no matter the situation."

As you can see from the photos, the rearend came in major components and did require some assembly. But that was no big deal, and once together it bolted up into the Mustang with no issues. As soon as we get a driveshaft and new brakes on the car (More on that next month!) we can get the car back on the ground and start the break-in process.

Unlike the stock rearend, the Quick Performance 9-inch keeps the axle in place with flanges bolted to the end of the axle housings. This is a much more secure setup than using C-clips. These are the flanges supplied by Quick Performance, be we won’t be using them because the Bear Brakes kit we’ll be installing next month uses its own flanges for mounting the brake calipers.

Ramos recommends a pretty simple break-in process to make sure the gears seat-in properly. Because this is a street car, we'll run mineral-based 80w-90 gear oil because Ramos says they see no real benefit for the more expensive synthetic oils in street service. Then we'll follow Quick Performance's prescribed break-in.

"Typically, we only require four or five easy heat cycles," Ramos explains. "A lot of guys do the first one on jackstands if possible, just to put minimal drag on the driveline. Run the car for about 10 minutes to get everything warmed up, then shut it down and let it rest for about 30 to 45 minutes to let it get back down to temperature. And we consider that a heat cycle.

And with that, the rear is ready for installation. It is a pain to get the gear oil into the housing with everything in the car, so we stopped here to put in a few quarts of Lucas Oil 80w-90 weight non-synthetic gear oil.

"The next four heat cycles you can do out on the road. Drive it like normal for approximately 15 minutes, then park it for 30 or 40 minutes—or even an hour if it's summer—to allow it to cool back down. That is going to set in the seals, and it's going to get the bearings started to break in. Until you get through the break-ins you may see a little bit of a drip of gear oil get past the pinion seal, so don't be alarmed if that happens. So that's the first five heat cycles; and then the sixth time you get in the car you can drive it like you are 16 again."

Brandon Luther from Hammond, Louisiana, bought his Metallic Silver 1999 Mustang GT, a true 35th anniversary edition, when he was a senior in high school in 2015.

Torres has owned 22 Mustangs, but none more special than his 1999 New Edge Mustang, aka China WhiTTe. The two capital Ts in the name stand for Twin Turbo.