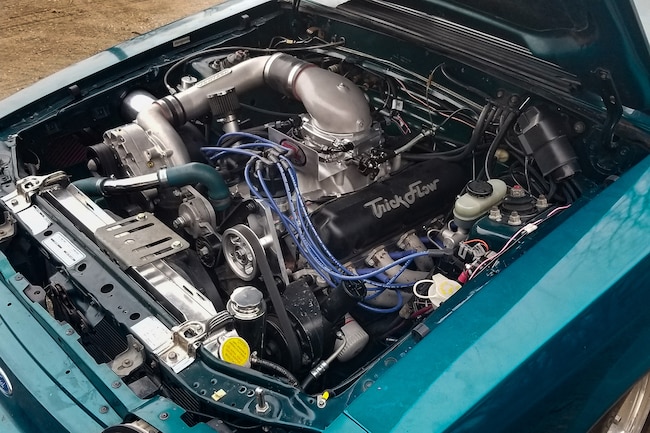 Bell's Fox-body already had an add-on EFI programmer and aftermarket ignition system overriding much of the factory's ECU programming, and Bell thought adding a supercharger into the mix would only compound the tuning headaches. Not only does Holley's Super Sniper EFI offer self-learning functions ease the tuning process, the self-contained ECU and plug-and-play ignition system greatly simplifies the wiring requirements. The Holley Sniper eliminates the mass air flow sensor and injector harness, as all the sensors, injectors, and idle control are incorporated into the Sniper throttle-body.

The Sniper blow-through, throttle-body utilizes a traditional carburetor intake, and Bell selected a Weiand Stealth dual-plane intake for a good balance between top-end power and torque. Combined with the efficiency of Vortech's V-3 Si centrifugal supercharger, Bell was hoping to put more than 500 horsepower to the wheels.

The results were beyond satisfying. Bell's 1993 Fox made 318rwhp with a typical head, cam, and intake combination. As an interim step, Bell dyno'd the naturally aspirated combination to compare the Holley Super Sniper 1250 and Weiand intake to the typical 5.0 EFI setup. The throttle-body injection configuration made 16 more horsepower and nearly identical peak torque, which surprised us considering how different the two intake manifolds look.

Besides the power results, Bell did all the tuning utilizing the included handheld tuner. While laptop software is available, it wasn't required to get this combination running and making great power. Besides the improved startup and drivability Holley Super Sniper and HyperSpark offered, Bell was impressed on how simple the Holley Super Sniper 1250 and HyperSpark Ignition was to install and set up on this supercharged combination. The Holley setup eliminated all the add-on workarounds normally required with a factory-style EFI system. This means an owner can install a supercharged EFI system and get their Mustang running without trailering the car to a specialized tuner.