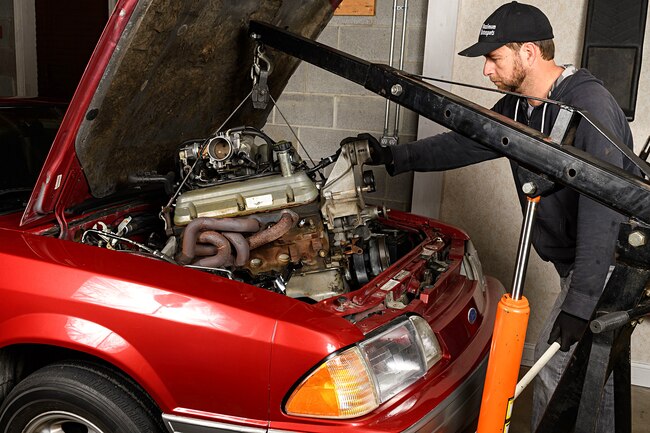 Engine building doesn’t have to be expensive. You can actually save some major coin if you’re willing to invest a bit of time and elbow grease.

Our plan was to rebuild the short-block and reuse as many of the parts as possible, including pistons. While much of the short-block was in great condition, a few of the pistons’ skirts had worn and to the point that the piston-to-wall clearance was more than twice the limit! (That would explain the racket this engine made during start-up.) Bummer.

Unfortunately, the excessive clearance meant we had to bore the block 0.030-inch oversize and buy new pistons. JE/SRP hooked us up with a set of forged 4032-alloy, flat-top pistons that fit our build and budget.

While the 5.0L H.O. short-block is essentially a standard-issue small-block Ford, there are a few subtle differences. Browsing the Ford Performance Parts catalog took the guesswork out of choosing the right odds and ends for our build, including a Head Bolt Kit, Timing Chain Set, HD Oil Pump Drive Shaft, and Freeze Plug and Dowel Kit. Besides a standard engine gasket kit, we opted for Ford’s reinforced rubber valve cover and oil pan gaskets. In our experience, they’re cheap insurance against irritating oil leaks.

To make sure everything was clean and kosher, we used some handy tools from Mr. Gasket, including their Engine Cleaning Brush Kit, Non-Marring Gasket Scraper, Engine Block Storage Bag, Crank Storage Bag, and Anti-Seize Copper lubricant.

Check out the images and captions as we hit the high points and cover a few tips we picked up from veteran engine builders. We’ve also included a handy parts list so you spend less time shopping and more time wrenching.

The engine in this 1991 Mustang GT was due for a refresh. 111,000 miles of abuse had taken their toll on the leaky lump.
Here’s our shopping list. We were hoping to just hone the block and reuse the factory pistons, but they were too worn out. Sadly, a simple “ring and bearing job” turned into a “bore it thirty over and use forged pistons job.”
Engine disassembly is messy, but straightforward. We removed a stubborn cylinder head dowel by sliding a socket that was just under the inside diameter of the dowel pin and used a vice grip to twist the pin out of the block.
After removing the oil pan, we checked the connecting rod side clearances using a feeler gauge. The clearance was well within the 0.010- to 0.020-inch tolerance, which saved us from buying new rods.
After removing the rod caps, we slipped some fuel hose over the rod bolts to avoid nicking the crankshaft bearing journals during removal.
Using a dial indicator, we checked the crankshaft end play. Decades of clutch kicks can take their toll on the crank’s thrust surface, but the endplay was within the spec of 0.004- to 0.008-inch.
We used a chisel to rotate the freeze plugs in their pockets and removed the plugs with pliers.
We used a length of exhaust tubing and 80-grit sandpaper to scuff the deck in two directions to check for low spots in the deck surface. The scratches were evenly distributed, indicating that our block wasn’t warped.
The threads that broke into the water jackets were especially cruddy, so we used a tap to chase all the threads in the block.
A Mr. Gasket Non-Marring Gasket Scraper easily and safely cleaned the old gasket material from the block and heads.
Even after 111,000 miles, the cylinders still showed signs of the OEM cylinder hone crosshatching. However, to promote fresh piston ring seal, the cylinders needed to be re-honed.
To knock the glaze off of the cylinder walls, we used a ball hone. With the hone in a drill set to high speed, we cycled the hone up and down in the cylinder twenty times in about ten seconds while lubricating continuously with WD-40.
The result was an angled cross-hatch pattern similar to the factory hone.
After honing the cylinders, we used a bore gauge to measure the bore diameter in two directions (parallel and perpendicular to the crankshaft axis) at the top, middle, and bottom of each cylinder. We recorded the measurements on a spreadsheet.
Next, we used a 4-inch micrometer to measure about halfway up the skirt of each piston, and listed these results on the spreadsheet.
Nerd alert! Here’s our spreadsheet with measurements used to calculate our clearances. Note that while our cylinder measurements were within spec, our pistons were worn to the point where the piston-to-wall clearance was very loose. All cylinders had at least twice (and cylinder 5 was three times) the recommended piston-to-wall spec. No wonder our engine was noisy at cold start! Fortunately, new pistons and the corresponding machine work were in our future.
After getting the block and rotating assembly back from the machine shop, an experienced race engine builder advised us to clean the cylinder bores with automatic transmission fluid. It lifts grit from the walls better than brake cleaner and helps the rings seat quickly.
We made our own piston ring filing jig with some scrap wood and a multi-tool, but careful work with a hand file would’ve also worked.
Carefully following the instructions included with our JE piston rings, we squared up the rings in the bores with a piston.
We used a feeler gauge to check after each filing pass and snuck up on our desired gap.
Our crank was in good shape, so it only needed a polish from the machine shop. We used Mr. Gasket’s Engine Cleaning Brush Kit to make sure there wasn’t any crud hiding in the oiling holes, as dirt in here will go straight into the bearings on startup.
To use The Gipper’s words, “trust, but verify.” We used Plastigage to double-check that our main and connecting rod baring clearances were within the 0.0004- to 0.0024- window.
After applying engine assembly grease to the main bearings, we slathered up the camshaft with cam lube and carefully slid it into place. Doing so before the crank is installed meant we could use our hands to guide the cam home.
We spread the rings just enough to clear the flat-top JE/SRP pistons using a piston ring installation tool.
Using a tapered ring compressor lubricated with oil, we tapped each piston home with the end of a plastic hammer handle.
One of the weak links in the 302 Windsor engine is the oil pump drive shaft. The HD oil pump drive shaft from Ford Performance Parts is cheap insurance against ruining our new engine should the stock oil pump drive shaft fail.
We’ve encountered timing chains that were sloppy (even when new), but this full-roller timing chain set from Ford Performance Parts was nice and tight! Exactly what our new engine needs for precise valve timing control.
Few things are worse than oil leaks on a new engine, so we skipped the problematic multi-piece oil pan gaskets in favor of this one-piece rubberized oil pan gasket from Ford Performance Parts. These were the factory-installed gaskets on later-model Windsor engines because they work great.
Ford Performance Parts also offers these rubberized valve cover gaskets. Like FPP’s oil pan gasket, these are reinforced with steel so they don’t distort and squeeze out. They’re reusable, to boot!
We used a drill extension and a ¼-inch driver bit to spin the pump and prime the engine.
Using a drill, we spun the pump counter-clockwise until oil flowed out of the pushrods and down the rocker arms.
We saved a lot of hassle by cleaning, painting and dressing the engine as much as possible before dropping it back into the Fox-body’s engine bay. Suddenly, it’s 1991 again!

When we left off last night in our Week To Wicked 1990 Mustang LX Sport project, we had just removed the stock engine and transmission and installed most of the Maximum Motorsports suspension.

This 1968 Mustang fastback took a long path to completion after a family’s loss, but it is now an incredible restomod.

Readers share the story and pictures of their muscle Mustangs and fast Fords. Gene Eckert and his 1990 Mustang GT from Baltimore, MD.