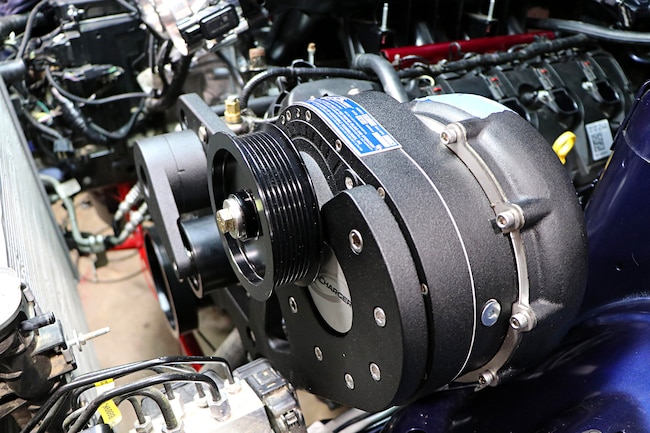 Naturally-aspirated, Ford's latest Coyote-powered Mustangs are quick—especially when plunked in a lightweight car. But in our quest for 8-second time slips in a relatively heavy S197-chassis Mustang, we knew we'd need quadruple-digit horsepower numbers. The easiest way to get there was boost, and the easiest way to add boost is with a supercharger.

The engineers at ProCharger are ready for racers like us. After a brief phone call, ProCharger sent us a system that will easily meet our needs. Starting with a "Stage II Intercooled Tuner Kit" designed for the 2011 Mustang GT, ProCharger substituted the standard-issue P-1SC-1 blower with an upgraded F-1A-94 unit and the race bypass valve. The rest of the kit is standard "Stage II Tuner" issue, including the larger air-to-air intercooler and dedicated 8-rib serpentine belt drive.

To make sure our Aluminator had enough VP Racing MS 109 fuel to match our target horsepower, we installed an octet of DeatschWerks 1200cc fuel injectors in our Aeromotive fuel rails.

We took our 2011 Mustang to Addiction Motorsports in Simi Valley, California, where they handled the install as well as tuning on their in-house Dynojet chassis dynamometer. Rocking the included 4.38 blower pulley netting a modest 17 psi of boost, the out-of-the-box Ford Performance Parts Gen 2 Aluminator with a Boss intake pumped 843.85 hp at 7,700 rpm and 596.73 lb-ft at 6,800 rpm through the 6R80 auto trans equipped with a Circle D Specialties Pro Series Stage III 258mm 3D stall converter. We were really happy with the initial numbers, as we're just getting started. We have more pulleys to test before we hit the track. Stay tuned!

Here's how we're going to make big power. This is a "Stage II Intercooled Tuner Kit" designed for our 2011 Mustang GT with an upgraded F-1A-94 blower in place of the standard-issue P-1SC-1 unit.
Compared to the "street/strip" P-1SC-1, the F-1A-94 blower has a higher max boost rating, (from 32 psi to 38 psi), more max airflow (from 1,200 cfm to 1,625 cfm), larger internal step-up ratio (from 4.10:1 to 5.40:1), and a higher horsepower rating (from 825 hp to 1,300 hp). Just what we need to get into the 8s.
The ProCharger "Stage II" air-to-air intercooler is good for 1,000 horsepower and fits behind the front bumper cover of our 2011 Mustang GT.
ProCharger's "Stage II Tuner" bracket accommodates both the P-1SC-1 and F-1A-94 blowers without modification.
The ProCharger's spring-loaded tensioning system to keep belt slippage to a minimum.
ProCharger's Stage II intercooler is expertly-fabricated and includes a provision for the mass air flow sensor.
Addiction Motorsports began the installation process by removing the front bumper cover.
Next, they lifted the intercooler into place and hung it from the supplied mounting bracket.
Then, the mass air flow sensor was swapped from the old intake tube to the intercooler.
Addiction Motorsports used the supplied brackets to secure the bottom of the intercooler to the front bumper support.
Then, the bolts on the radiator support bracket were tightened.
Next, the supercharger lower pulley was mounted to the crankshaft damper.
With the intercooler mounted, Addiction Motorsports turned their attention to mounting the F-1A-94 supercharger to the ProCharger mounting bracket.
The optional black finish looked great in our 2011's engine compartment.
Next, the optional race bypass valve was installed in the supercharger discharge tube.
With the supercharger mounted, the supercharger inlet tube and filter were installed.
ProCharger also included this low-profile fan that clears the supercharger drive setup. Trick!
With the fan mounted, assembly continued by connecting the intercooler outlet tubing to the throttle-body. We originally planned to use the larger Ford Performance 90mm throttle-body, however we ran out of time to fabricate an inlet. In the interim, we installed the factory throttle-body for the time being.
Before installing the supercharger belt, Addiction Motorsports installed the accessory drive belt.
With the accessory drive belt routed, the supercharger belt was installed around the included 4.38-inch blower pulley.
After installing the supercharger discharge tubing between the blower and the intercooler, the vacuum tube was connected to the race bypass valve.
Next, Addiction Motorsports pulled the 80 lb/hr injectors from the Aeromotive fuel rails.
To make sure our Aluminator had enough VP Racing MS 109 fuel to match our target horsepower, these Deatschwerks 1200cc fuel injectors (left) replaced the old 80 lb/hr squirters (right).
With the installation finished, the front bumper cover was reinstalled.
After checking everything over, it was off to Addiction Motorsports' in-house Dynojet chassis dynamometer for tuning and power runs.
Now we're getting somewhere! With the ProCharger F-1A-94 pushing only 17 psi through the Ford Performance Boss intake manifold, our Aluminator combination made 843.85 hp at 7,700 rpm and 596.73 lb-ft of torque at 6,800 rpm. This was through the 6R80 transmission equipped with a Circle D Specialties 3D torque converter. We have more pullies to try in our quest for 8-second timeslips. More to come