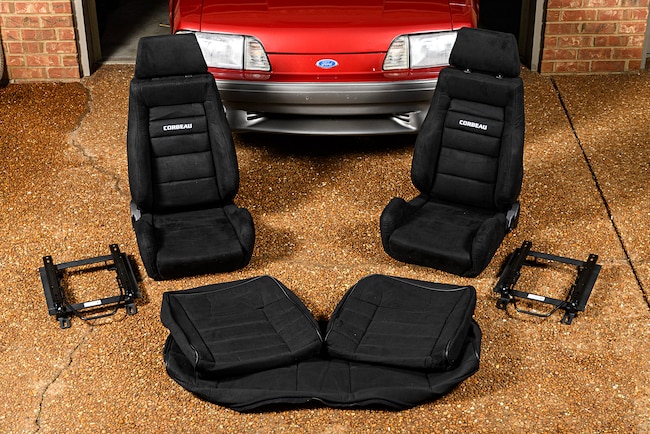 Fox-body Mustangs are enjoying a resurgence in popularity, but many are pretty rough around the edges. After 28 years, the seats on this 1991 Mustang GT were disgusting. Nearly three decades of sunlight, sweaty bottoms, and fast food spills left our seats faded, worn, and stained. The driver’s side seat track was broken in three places, to boot.

Sure, we could find a salvage yard seat track and re-cover the stock seats, but we wanted a sportier seating feel than what the stock buckets offered. There’s a lot of seating options for Mustangs out there, but when it came to matching the back seat, you’re out of luck or calling a custom upholstery shop.

Fortunately for us, Corbeau now offers back seat covers that match the material on their front seats. This makes Corbeau unique in offering a complete seating solution for worn out fox-bodies such as ours.

Corbeau’s GTSII seats have a timeless look that will be right at home in this 1991 Fox body. The firm foam padding, aggressive side bolsters, and supple suede material harken back to the optional sport seats found in early fox and Saleen Mustangs.

We opted for Corbeau’s “double-locking” seat tracks that mount the seat rigidly and bolt directly to the factory seat mounting points in 1979-2004 Mustangs. It doesn’t get any easier than that.

Not only do Corbeau’s GTSII seats hold us in place for spirited driving, back seat riders also enjoy the benefits of the same grippy black suede as Corbeau’s GTSII buckets. No more mis-matched Mustang seats!

Corbeau offers a complete seating solution for fox body Mustangs including back seat covers that match the material on Corbeau’s front seats. We chose Corbeau’s GTSII front seats and double-locking seat tracks that are a direct bolt-in to this 1991 Mustang GT.
Twenty-eight years of abuse meant our seats were in sorry shape. Sure, we could find a salvage yard seat track and re-cover the stock seats, but we wanted a sportier seating feel than what the stock buckets offered.
Note how nearly three decades of sunlight beating through the hatch glass had taken its toll on the tops of our folding back seats.
We began by removing the stock front seats. First, we slid the seats forward to access the rear mounting bolts and removed them with a 15mm socket.
Then, we disconnected the power lumbar support connector.
After sliding the seat backward, we removed the front mounting nuts with a 15mm wrench and pulled the front seats from the car.
To remove the back seat cushion, we squeezed the bottom toward the back of the car to release it from the support bars and set it aside.
With the rear seat backs folded down, we removed the carpet panel trim screw from the seat backs. This exposed the hinge mounting hardware which we removed with a 7/16” socket.
Next, we laid the rear seat cushion on a bench and used a needle-nose pliers to remove the seat cover hog rings.
Our 1991 Mustang’s rear seat belts passed through the seat cushion, so we needed to reuse the seat belt pass-through trim rings We used a screwdriver to pry them off. We found that prying up under the retaining collar at an angle released the them more easily.
Using the seat foam as a guide, we transferred the locations for the seat belt pass-through trim rings on the new Corbeau seat cover.
Then, we used scissors to carefully cut the holes for the trim rings in the seat cover.
With the holes cut, we transferred the trim rings to the new cover.
Using a hog ring pliers and fresh hog rings, we fastened the cover to the back seat cushion frame. We found it helps to hook the hog ring on the cover to pull the cover it into position before clamping it down.
Next, we moved on to the rear seat backs. We used a 7/16” socket to remove the inner hinge bracket.
Then, we used a panel popper to pry the panel fasteners from the seat back frame.
With the seat back flipped over, we used a wire cutters and pliers to remove the hog rings from the listing rods buried in the seat foam.
Then, we transferred the listing rods to the Corbeau seat covers.
We secured the listing rods inside the foam creases using hog rings.
We inserted the supplied panel fasteners along the perimeter of the Corbeau seat cover.
Then, we used a small screwdriver to locate each hole in the seat back panel and secured the seat back cover with the panel fasteners. If we couldn’t insert them by hand, a few soft blows with a rubber mallet did the trick.
We repeated the process for the other folding seat back. Before installing the seats back in the car, we reinstalled the inner hinge bracket. We cut a small slit in the cover behind the bushing to relieve where the hinge rod passes through.
Progress! Look how much better the Corbeau black suede seat cover (left) looks compared to the faded (formerly black) tweed seat cover on the right.
We installed the rear seats in the same manner as they were removed. Now is a good time to clean out all the junk under the rear seat cover. Yuck.
After guiding the rear seat belts through the trim rings, we snapped the rear seat down in place.
With the back seats done, we moved to the front seats. We slid the seat tracks out of the way to access the front and rear mounting holes and installed the supplied bolts.
Corbeau’s GTSII seats (left) have a timeless look that will be right at home in this 1991 Fox-body. The firm foam padding, aggressive side bolsters, and supple suede material harken back to the optional sport seats found in early fox and Saleen Mustangs. They’re light years ahead of the worn out stock seats (right).
We installed the front seats over the studs. The Corbeau seat brackets have generously slotted holes, so we installed all the fasteners first before tightening anything down.
What a difference new seats made to the interior of this well-worn 1991 Mustang GT! The old seats were so faded and disgusting, it was embarrassing. Not only do these seats freshen up the looks of the interior, the well-designed side bolsters and firm padding provide a much sportier feel to this old fox body GT.
Finally, back seat riders can enjoy the benefits of the same grippy black suede as Corbeau’s GTSII seats. No more mis-matched aftermarket Mustang seats!

Readers share the story and photos of their muscle Mustangs and fast fords. This week's snapshot is Sean Combs' 1991 Mustang LX coupe.

Maximum Motorsports helps us install an SN95 steering rack in a 1991 Fox Mustang.

Fans of muscle mustangs and fast fords magazine share the pics and stories of their ride, inclusion of this 1991 Ford Mustang.