How to Replace the 2003-2004 Cobra Gauge Cluster Inverter

How to Replace the 2003-2004 Cobra Gauge Cluster Inverter 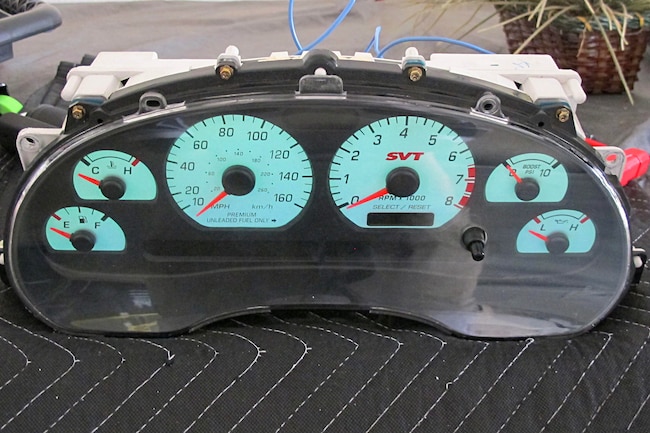 The reason that most of us want a Mustang Cobra is because it’s different than a standard Mustang GT. Every Mustang Cobra ever built had more horsepower, upgraded styling cues, and revised wheel designs when compared to a standard Mustang GT. In a nutshell, the Cobra, in many a Mustang enthusiast’s eyes, is better than a GT. With anything, though, buying a car with more technology and performance built into it does have its drawbacks.

In many cases, there is more to fix when it comes to upgraded factory cars, and with our 1994 Cobra, we have found that to be true. With the car being Terminator-swapped, and with blown head gaskets when we purchased the car, the engine had to be redone by MPR Racing Engines with fresh JE pistons, head gaskets, ARP hardware, oil pump, and the like, to get the car back in business. Once we had the car back in running order, it was time to fix random issues to make it a safe daily driver. The car had Mickey Thompson ET Street Radial Pros, which as you know, are basically race tires, so whenever we left the house, we had to check the weather to make sure we wouldn’t run into rain. We had to remedy that rather quickly so we added Mickey Thompson ET Street S/S radials that have worked tremendously well, even in the rain. We also added new Mickey Thompson Sportsman S/R radials up front, as well. With the car good on tires, it was time to tackle other mechanical aspects.

One of the other things we needed to fix was the gauge cluster. In short, it wasn’t lighting up. Our Terminator-swapped 1994 Cobra features a 2004 Cobra gauge cluster so repairing it wasn’t as easy as replacing a bulb or two. The 2003-2004 Cobra gauge cluster features a power inverter that is responsible for illumination. When you lose illumination, that inverter is most likely the culprit. To fix this issue, you have few options. The option we went for was getting a complete cluster from The Parts Farm. Taking this route meant we would have all the parts needed to get our gauge cluster in working order. The Parts Farm is celebrating four years in business, and even though that may not sound like a big deal, for any company to last that long while continuing to grow is a big deal. The Parts Farm shows no sign of slowing down, so if you need parts for your Mustang, give them a look. Until then, check out what we went through to fix our Cobra’s gauge cluster.

We were able to find a complete 2003-2004 Cobra gauge cluster at The Parts Farm. The Cobra gauge clusters, and other products aimed at repairing them, are quickly disappearing. As the cars get older, this problem will continue to get worse. The Parts Farm made sure the cluster worked properly before sending it out, and we will show you how to test cluster operation, as well. We only really needed the inverter responsible for illuminating the gauges, but it was comforting knowing we had everything at our disposal just in case we needed anything else.
In order to remove the factory cluster, fellow Mustang-360 tech editor Mark Houlahan from Mustang Monthly starts by using a pick tool to pull back on the headlight knob’s release lever to disconnect it from the switch.
With the headlight knob out of the way, Mark then moves on to the cluster surround, which is attached via two T-20 Torx screws at the top.
To make it easier to remove the gauge cluster surround, Mark tilts the column and wheel lower for additional room. When removing the cluster, tilting the column out of the way will make it easier to work in that area.
Even though the screws have been removed from the surround, there are clips still holding it in place. Gently use your hands to pry the surround free from the clips, and remove it from the dash. Our gauge surround is a little different in the fact that it has a shift light attached to it, but we just put it aside, and kept working.
For the actual gauge cluster, there are four more T-20 screws attaching it, and once they’re loose, you have to disconnect a couple harnesses and the boost gauge vacuum line. To help remove it, tilt the cluster back to give yourself more clearance.
With the cluster out of the car, Mark removes six screws on the back cover to access the wiring.
Removing the back cover exposes the gauge cluster’s circuit board. You must disconnect a couple wiring connections, including the electronic odometer. Carefully peel the circuit board away. You can see where each gauge plugs into the circuit board, and also where the factory boost gauge resides.
The gauge cluster lens uses eight screws to hold it to the cluster assembly.
Mark lifts the gauge face out of the housing and flips it over to address the illumination inverter.
With the gauge face flipped over, Mark can access the inverter. Here he compares the existing inverter and the new-to-us inverter from The Parts Farm replacement assembly. Using a factory part means we knew it would bolt right in without any worries. You’ll notice one of the wires coming from the inverter is the one we had to disconnect at the beginning of the disassembly process.
Mark connects one side of the inverter wiring, and then tightens it into place.
Make sure to feed the inverter’s other wires through the hole for the boost gauge…
…like so. You will be mad at yourself if you have to take everything apart because you forgot to feed the wires through. Also, be sure to attach the boost gauge line when reinstalling the gauge cluster into the car.
Placing the circuit board back into place, Mark makes sure to reattach the odometer harness and the inverter harness.
Before going through the work of reinstalling the cluster, Mark wants to make sure the inverter swap did the trick and uses this portable battery booster to test the gauge cluster. To do this, Mark uses the factory wiring schematic to pinpoint what needs to be powered up to see if we are successful or not. Pins 1 and 20 are grounds, while Pin 4 is lighting, and Pins 10, 11, and 12 need to see power. Connecting everything shows us our work was done here.
With the inverter swap a success thanks to The Parts Farm, our Cobra’s gauges now illuminate the night. We no longer need to use the interior light, or our phone to see how fast we’re going!

Short-block build for our 1994 Terminator-swap Cobra with help from MPR Racing Engines.

Step by step to replacing a turn signal switch.