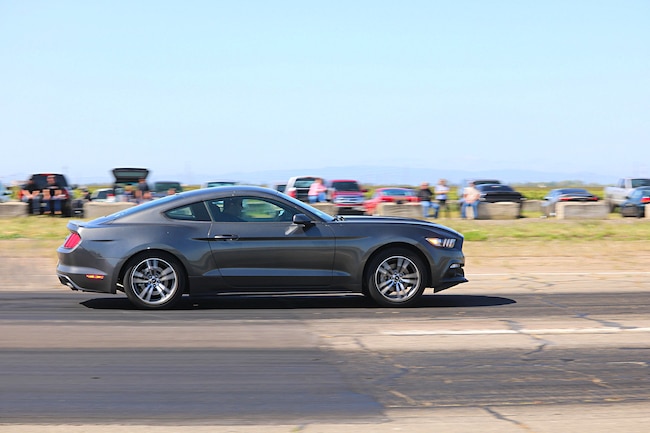 Technology has come a long way in the past few years, with today's Ponycars leading the charge. While the ultra-quick 2018 5.0L powered Mustangs are capable of obscene track times even in stock form, Ford's other engine options can't be dismissed for those who are looking for a daily driver. The 2.3L four-cylinder EcoBoost engine that powers 2015-and-up Mustangs is simply one heck of an engine and uses turbocharged direct injection technology to crank out 310 horsepower in factory form. This engine also turns the Mustang into a gas-sipper, with 30-plus mpg capabilities on the highway. Even so, as with most new cars, there's always room for improvement.

Our particular Mustang is a 2016 that was mostly stock, except for some computer tuning that would still work on 91 octane. This custom tune raised the boost from 18 psi to 22 psi, which gave the Mustang a solid half-second in the quarter-mile (going from low 14s to high 13s) but also introduced a factory limitation. As boost rises, so does heat, and an atmosphere and a half of extra boost can create a lot of heat. As temperatures rose into the 90s, the intake air temps climbed even higher and so did temperatures post-intercooler. At more than 100 degrees ambient, charge temperatures plunged straight into the danger zone at more than 150 degrees. At this level of heat, pistons can be in danger, so the computer compensated and pulled more than 5-degrees of timing at the top of Third gear. Clearly not running the car in the summer wasn't an option, and our fluctuating mph at the track (between 98 mph and 101 mph) indicated our top-end power was both inconsistent and lacking.

What to do? Water-Methanol, nitrous oxide, and a larger intercooler were all options for decreasing intake temperatures, but out of those three, the larger intercooler was the only option that didn't require tanks to fill. Since the Mustang was our daily, we opted for the simple passive cooling option. Fortunately, the aftermarket is full of EcoBoost support, and Mishimoto was at the ready with an improved intercooler option. Our first big plus was that the Mishimoto unit would fit in the factory location, which was a definite benefit. Second, with increased cooling capacity, our engine should be safely out of the danger zone. And finally, we could continue cranking up the boost even more, which would leave us room to grow in the future.

Mishimoto indicates install time for the new intercooler would be about 2-3 hours, but with a moderate difficulty level; we decided to let the pros at Paramount Speed in Chico, California perform the installation. Since gaining access to the intercooler and piping would mean removing the front clip, we wanted plenty of mechanics on hand to help. As far as installation time, Mishimoto was fairly on point with the factory intercooler out and the larger one installed in about two hours. No special tools were required either, as taking off the front fascia, grille, and removing the grille shutters was probably the most difficult part of the installation.

After the installation, the only question that remained is: would it help? If you're the type of person who skips to the end of the story the answer is yes, it does – but that's only part of the story. With only a 2-degree temperature rise from 30-90 mph in our third gear test, it was clear the intercooler was doing its job well. With the tune, the stock intercooler was wheezing, and a whopping 34-degree temperature rise was the result. At the track, the incrementals on the best pass with our stock intercooler resulted in a 2.11 60-foot time, 9.0 at the eighth-mile, and a 13.97 at 101.5 mph in the quarter-mile. With the intercooler, a greasy track meant a slower 2.17 60-foot time, but the car had caught up with a 9.0 in the eighth. Post-intercooler in the quarter-mile the car clicked off a 13.87 at 103.5 mph, gaining 2 mph and a tenth with the same tune! Instead of pulling timing, the computer now added 2.5-degrees, which is a big reason the car gained speed on the top end.

So was the intercooler install a success? In our opinion yes it was. It opened the door for more performance, and even with a mild 91 octane tune it was able to pick up power and improve the vehicle's quarter-mile times. Our feeling was that in a half-mile or mile (or top speed) it would help even more. It's a device that's always on, works well when it's cool out, and even better when it's hot out. It’s also 50-state legal, and for a retail price of around $500, it's a modification that's tough to beat.

Timing And Temperature Table Before And After Intercooler

In order to gain access to the factory EcoBoost Mustang intercooler, which is actually towards the bottom of the vehicle, we first needed to remove the factory undertray.
There are a couple different ways to replace the intercooler per Mishimoto's online video. We chose the quicker way of taking the front grille assembly off so that we had plenty of room to work. First, we removed the bolts that hold the bumper to the fenders located on the inner fenderwell and then unclipped the bumper from the fenders. Unfortunately, the inner fender clips are very easy to break, so we had to be extra careful when loosening them. We also took this chance to unplug all the lighting.
In order to gain access to the core support we had to remove the factory air diversion cover that is held on mostly by pop-clips. After this, we unbolted the front bumper from the core support. Next up would be one of the more difficult parts of the job.
The EcoBoost has a set of factory air shutters to help with fuel economy when cruising. There's barely room to sneak any tools in to remove the rear shutter bolts, so we had to settle with a tiny ratchet and a lot of patience. Make sure to remove the wiring for the shutter motor during this step.
With everything ready to come off, Paramount Speed technicians Steve Ellis and Wes Schwinn were able to remove the front grille assembly from the vehicle. This really is a two-person job, so if you're trying this yourself, bring a friend.
Now that everything was out in the open, the factory intercooler (bottom) was really quite easy to access. In only a few more minutes we'd have it out.
There are bolts, two intercooler boots and a MAP sensor that we had to remove before the intercooler came out. Again, due to space constraints, this was done with simple hand tools.
It was a tight fit, but the intercooler was removed by gently twisting the bottom towards the front of the vehicle. Mishimoto indicated the radiator needed to be lifted up also, but we squeezed it out without unbolting the radiator support.
Before we installed the intercooler we removed the MAP sensor from the old unit and bolted it onto the Mishimoto piece. Make sure to remember this step, as you don't want to do it after everything is together!
With a 58-percent larger core it doesn't look like the Mishimoto intercooler will fit in the same area as the stocker, but it does. It even uses the same mounting bolts and boots as the factory version.
After plugging in the MAP sensor and tightening the intercooler boots, we were ready to get into the meat and potatoes of the reassembly.
With the Mishimoto intercooler installed the underside of our Mustang actually looked sort of intimidating, as much as a turbo four-cylinder can anyways.
It was grille shutter time. Fortunately for us, the intercooler is mounted below most of the mounting bolts so it didn't impede our access.
With the grille shutters and hood latch installed, we mounted the front fascia. Again, mounting the front grille assembly without breaking anything was probably the most difficult part of the process.
With the grille back on we made sure to double-check that all our lights were hooked up and none of the wires were pinched or bound anywhere.
Our final step before hitting the road was to install the factory undertray; with our larger intercooler installed out of sight, we were officially a sleeper!
It may not seem like a huge deal anymore to run 13s, but we were surprised at who we could consistently beat, including a number of modern day V8s.

Daniel Erny from Ashburn, Virginia, is the owner of this unique 2016 Mustang GT Performance Package full of modifications.

This week's Mustang Girl Monday is Yoselin Munoz, who fell in love with her car, a 2016 Mustang

This week’s Mustang Girl Monday is Michelle Hatfield and her 2016 Ecoboost Mustang.

2016 Shelby GT350 Has All the Road Course Suspension Goodies

Rich Krabbe has always wanted a Shelby, but he could never find one until he stumbled across this 2016 Shelby GT350 in Competition Orange.