Newsletter
Sign Up today for our FREE Newsletter and get the latest articles and news delivered right to your inbox.
Home
Mustang Monthly
How To
Paint Body

How To Paint Body 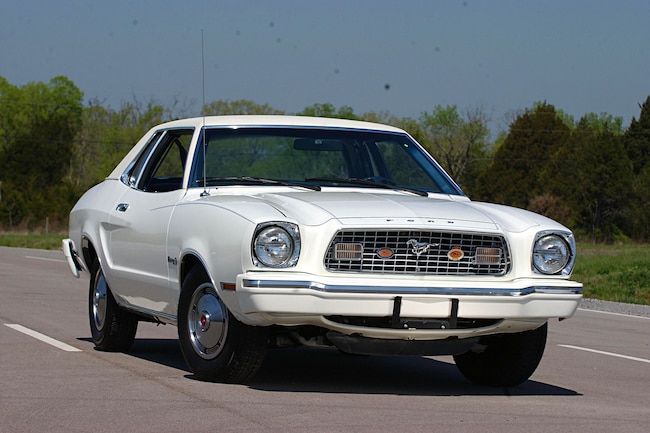 Spotting a 1974-1978 Mustang II is very easy, as they are dramatically downsized from their 1973 and older and 1979 and newer siblings. The Mustang IIs stand out like a child in a roomful of adults. The difficulty, and we mean real difficulty, is distinguishing one model year from the next within the Mustang II series.

The 1974 lineup offered two body styles, starting with the basic two-door hardtop.
Starting with the ’75 model year, the changes were slim and none, and amounted mostly to either a new option, such as the T-top in 1977, or a new specialty model such as the Cobra II that came out in the spring of 1976.

Despite the IIs smaller size, Ford still carried over the major styling cues from the past, including a high mounted grille, simulated side scoops, three-pod taillights, the running horse logo, and the long hood and short rear deck design. Likewise, Ford dropped the convertible, and offered just a hardtop and a fastback model each year.

SIDEBAR 1
Special thanks to Phillip Schmidt of the Mustang II Specialty Shop in Fairfax, MN (Pschmidt65@prodigy.net) for help on this story.
End Sidebar 1

Every Mustang II fastback is a 3-door model, counting the new hatchback, as seen on this ’74.
The filler cap, flush to the body on the passenger side rear quarter, is below the body line on every ’74 model.
The filler cap for the gas tank is above the body line on all 1975-1978 models, as seen on this 1977 fastback.
Ford replaced the ’73 Grandé with the ’74 Ghia, available on the hardtop. This Ghia has to be a ’74 model because there is no opera window on the back side of the roof and no Ghia badge. Instead, this car has the standard rear quarter window.
On 1975-1978 Mustang II Ghia models, Ford added a Ghia badge to the rear quarter pillar and shrunk the quarter window to an “opera” style. Ford also offered a full or a half-vinyl roof with the Ghia (and the standard hardtop) for 1975-1978 models.
Ford called their Mustang II fastback a “3-door,” available as a sporty two-door and as a Mach 1, which came standard with the optional six-cylinder.
This Ghia (a 1977 model) is obviously a 1975 or later by the Ghia badge on the C-pillar.
This Cobra II is either a ’76 or a ’77 model by the striping pattern along the lower body side.
The bold side stripes along the middle of the side define this Mustang II as a 1978 model Cobra II.
T-Tops were optional in 1977 and 1978. This Mustang II, from the 2016 All Ford Nationals in Carlisle, PA, appears to be a 1978, as it is identical to the Mustang II in the photo from the Ford sales brochure.
This Mustang II is a Silver Ghia, which was a special model for ’75 only, as seen in this car show photo and in this sales brochure photo.
Late model year 1976 and continued into 1977 was the Stallion, seen here in the 3-door model. However, the Stallion package was available on the two-door hardtop, which are “very, very rare” per Mustang II aficionado Phil Schmidt.
The King Cobra was a one-year only model, available on the fastback, and seen here in Tangerine Orange with optional T-tops. The Cobra graphic on the hood makes this model unmistakable, along with its front air dam, fender flares ahead of rear wheels, reverse-facing hood scoop with 5.0L decals, and blacked out trim. (NOTE: The side and rear window louvers were not part of this package and were dealer installed on this car.)
This Mustang II is a Ghia, as evidenced by the rear of the roof. The Ghia badge tells us the model is 1975-1978—this one happens to be a ’77 model.
Turn signal marker lights in each side of the grille in ’74 feature a horizontal metal bar through the middle of the lens. (Photo by Phil Schmidt)
The V-8 emblems on the front fenders denote a 1975-1978 model. A V-8 was not an option in 1974.
For 1975 and later model Mustang IIs, Ford deleted the metal bar that goes through the middle of the lens in the turn signal lights on either side of the grille. Also notice the space between the hood and grille; this is a ’75 or later model. The ‘74s had a deeper panel here, which was changed when the V-8 was introduced in 1975.