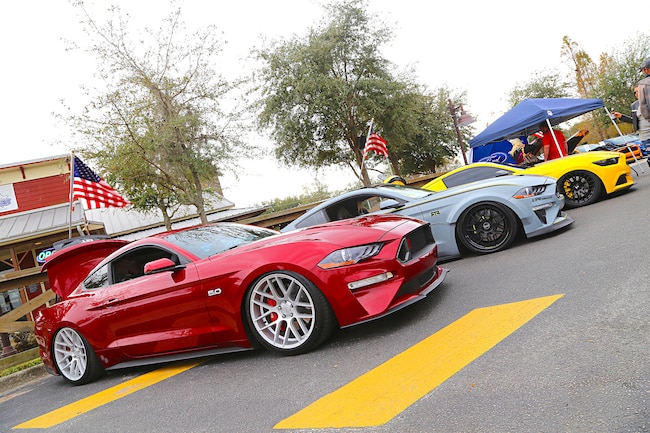 There is no doubting the powerful pull of the latest Mustangs. Team Mustang knocked it out of the park to launch the original pony car on the world stage. When Ford debuted the S550 platform and stoked its fire with more potent engine options, it attracted Ford loyalists and lured enthusiasts away from other brands. That was definitely the case for Dell Sterling. A longtime import enthusiast, he saw the first concept drawings and learned about the Coyote engine platform. He knew he just had to have one, and he stepped up to a 2015 Mustang shortly after they debuted. From there he followed a similar path that he had with prior cars — he created an online community.

Launched as a Facebook group dedicated to enthusiasts of the S550, this group targeted those living in the Sunshine State, where Mustangs are wildly popular. Florida S550 began with 100 or so members and has grown to nearly 2,000 members with addresses ranging from Tallahassee to Key West. If you don’t know your geography, that covers the length of the state.

Eventually the group became a true community when Florida S550 began hosing informal meets, or “meats” in the group’s parlance due to the faithful inclusion of a food as part of the gathering.

“The first year was just a test. We had about 50 cars, and 20 would show up and 10 would leave. We did it at Courtney Campbell Causeway. It was a good time, but it was super hot,” Dell told us. “The following year we went to a park in St. Pete and the expectation was about the same. We’ll have a barbeque and a small community, and we ended up with over 200 cars. We were losing our minds and didn’t know where to park all the cars, but it ended up working out and everyone had fun.”

The gathering really cemented the bond of these fans of all things modern Mustang. It is one thing to chat online, but it is another to meet face to face and check out those cars you have only seen in photos.

“It is fun when you can meet people that you talk to online all the time. You can put a face and a car with the name,” he enthused. “Now we have a real community.”

We caught wind of the third-annual Florida S550 Mega Meat taking place at Boots ’N Badges, a barbeque joint on the property of a Harley-Davidson dealership in Brandon, Florida, so we headed out, camera in hand, to capture the coolest rides. The event did not disappoint, with nearly 100 modern Mustangs on hand along with a smattering of older Mustangs.

It was a great time, which the group is sure to continue next year, but they may host another gathering later this year because there was so much local event competition for the annual event, ranging from a drunken pirate fest to a historic road race.

“I want to do another one in October on a Sunday because I had a lot of good friends that couldn’t make it because they were working,” Dell added. “We also had Gasparilla and the 24 Hours of Daytona this weekend.”

Until then, if you are in the area and missed this year’s event, we documented a few favorites here along with a comprehensive gallery of attendees below, so check it out.

The third-annual Florida S550 Mega Meat brought out all flavors of 2015-2019 Mustangs, including this colorful trio run out of the Parker Performance stable.
Speaking of colorful, Jeremy Branch rolled over to the gathering from the Space Coast in his wrapped-green 2016 Shelby GT350. Aside from snake and Ford Performance livery on its hood and rear seat delete, it carried green accents and Alcantara accents on its interior. This Voodoo puts down 520 horsepower to the wheels courtesy of a Lund Racing flex-fuel tune and a full Stainless Works exhaust. It slithers through the corners faster thanks to suspension upgrades from BMR and MagneRide-friendly springs from Eibach.
With his shop just minutes away, it was no surprise that Sam Lippencott of Coastal Chassis Dyno & Performance was on hand with this 2018 Shelby GT350R. A special car in stock form, this R-model is far from stock. It belts out over four digits courtesy of a sleeved 5.2-liter block filled with forged goodies. Boosted by a ProCharger D-1X and fed by a Fore Innovations triple-pump fuel system and ID1300 fuel injectors it ran a blistering 182 mph in the standing half mile with Sam banging gears on its Tremec Magnum six-speed trans backed by a QA1 carbon fiber driveshaft.
Kristina Garcia brought out this low-slung, EcoBoost-powered ride. Tuned up for corn by Unleashed Tuning, it surely cooks as hot as it looks. Its pavement-scraping ride height is courtesy of an Airlift suspension that sets the stance over Niche wheels wrapped in BFGoodrich rubber.
Another ride slung low courtesy of an Airlift 3P system was Derek Roseberry’s 2019 Mustang GT. Boosted by a ProCharger Stage 2 system fed by a PMAS cold air intake, its Gen3 Coyote is tamed by a Lund Racing calibration. It rides on a quartet of 20x10.5 Velgen wheels wearing Falken tires. While it obviously packs some horsepower, it likely has more power in the custom JL Audio system crafted by Sound Waves in Tampa, Florida.
Wide, low, and twice boosted, Christian Haig’s ride stood out from the crowd thanks to his eye-popping hue and Stage 3 Motorsports widebody kit. It too is dropped by an Airlift suspension system. However, it was a look under the hood at the On3 twin-turbocharged Coyote that had most observers stopping to check out the goods.
Josh Parker lucked into finding this special Mustang RTR that Vaughn Gittin Jr. created for the SEMA show languishing on a local Nissan lot. He picked it up and quickly added an Airlift suspension at his shop, Parker Performance, and headed to Mustang Week last year. Since then he’s add some neon under-car swag, a Nitrous Express 150 shot, and a Lund Racing tune. Before it appears at Mustang Week 2019, a Ford Performance supercharger upgrade is on the schedule.
Running out of the Coastal stable, Geoffe Maze’s ProCharged 2015 Mustang is good for over 700 horsepower at the wheels and 165 mph in the standing half mile. His boosted Coyote 5.0 barks out through a full ARH exhaust and is backed up a Tremec Magnum six-speed conversion fitted with a SPEC twin-disc clutch.
Don’t think of Sherry Perez’s 2017 Mustang as just a V6. Known as Ducky, her yellow S550 rolls low on an Airlift 3P suspension augmented by BMR sway bars. It gets a little extra performance courtesy of a Roush cold-air intake. However, in the near future its six-banger is scheduled to receive a Jack McGraff-built twin-turbo system at Parker Performance.
Also following that Coastal recipe was George Lindsay’s S550. Cranking out mid-700 horsepower at the rear wheels, its Coyote 5.0 features a sleeved block topped by GT350 cylinder heads fitted with Ford Performance cams. Boosted by a ProCharger it puts down power through a 10R80 auto fitted with a Circle D torque converter.
We caught Sebastian Pinto out snapping shots of his 2017 Mustang GT, which also rides on an Airlift 3P suspension that hovers the body over Vossen CV3 wheels. Wearing an aftermarket GT350 fascia conversion, his Coyote growls out through a Corsa Xtreme cat-back exhaust.