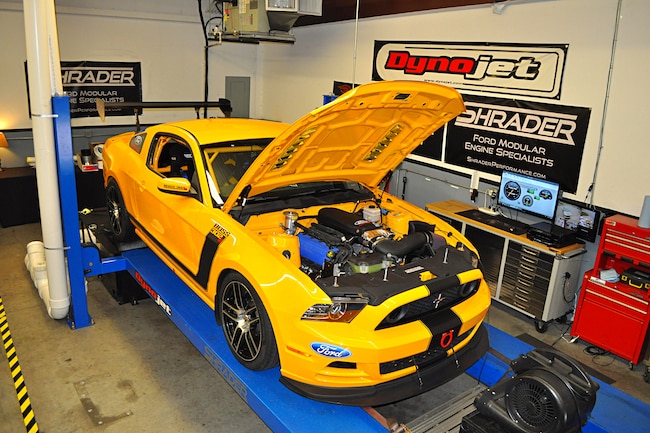 Show us a Mustang owner, and we’ll show you someone wanting more horsepower at their disposal. It doesn’t matter if their car makes 400, 700, or 1,200 horsepower, we’re willing to bet they wish for more. More boost, more nitrous, more cubic inches, or simply a more free-flowing intake and exhaust, is what we’re always seeking, and we can never get enough.

In the case of David Melhado, there was a time when he was more interested in showing and cruising around in his various Mustangs. That all changed when his wife bought him a Richard Petty Driving Experience ride. That lead David to get a little more serious, and purchase this School Bus yellow 2013 Boss 302S. David uses the Boss as-intended, as it sees regular action at Mustang events and track days, but like all of us, he wanted more power.

He devised a plan of attack, contacting Shrader Performance’s Steve Shrader with a list of performance enhancements, which included opening up the intake with a Ford Performance Cobra Jet intake manifold/dual 65mm throttle-body and a JLT Performance cold air intake, a larger exhaust from Kooks Headers & Exhaust, and a custom Shrader Performance tune. We expected to see some pretty good results, but the results were way better than “pretty good.” Keep reading to see how much better.

Installing long-tube headers in an S197 or S550 Mustang is a bit of a challenge. Installing the Kooks long-tube headers into David’s Boss 302S was a bit more challenging because of the Boss 302S’ 13-quart road race oil pan. The driver’s side especially is difficult because the headers and the oil pan try to occupy the same space during installation. “The passenger side can be installed without dropping the K-member,” Steve Shrader says, “but the driver’s side tubes will not fit through the opening because of the oil pan.” Steve uses this engine crane to hold up the engine so the K-member can be lowered out of the way to ease installation. “The K-member has to be dropped about 6-7 inches on the left side to slide the tubes through,” Steve says. Once the headers are in the pocket, then you can remount the K-member and begin the header installation to the engine. With the engine raised, there’s not much weight on the K-member, so it’s easy to just remove the left side bolts, and then loosen the right side bolts so that the left side can drop down far enough to squeeze the header in place.
One of Steve’s tricks of the header install is to re-tap or use a thread chaser on all the header mounting holes before installation. Doing so makes it easier to turn the bolts by hand when lining up all the bolts initially. “Sometimes you can only get two fingertips on a bolt, and if it won’t turn, then you’ll resort to lots of foul language or drinking shots of whisky to deal with the frustration of not having small hands,” Steve says.
Not only did Steve have to drop the K-member, he had to remove the Boss 302S’ remote mount oil filter on the passenger side because it gets in the way of accessing the number 1 cylinder header bolts. Steve removes the remote oil filter to gain easier access to those bolts, and even for inserting the passenger motor mount back into place through that opening. The steering shaft, starter, and both motor mounts have to be removed for header install, along with the K-member brace.
Once Steve has the headers bolted in, he can also install the Kooks X-pipe. With the headers and X-pipe installed, Steve can move up top to the Cobra Jet intake and JLT Performance cold air. Kooks has pretty much every exhaust component available for 2011-2014 Mustang GTs and Boss 302s, including emissions-friendly components. Finding an exhaust solution for your S197 won’t be an exhaustive proposition.
Steve mentions the heat shroud for the JLT cold air intake doesn’t quite fit with the Boss 302S’ oversized radiator. To remedy the situation he had to cut and shape the heat shroud to get everything properly fitted. However, Steve modified it so that it would still pull in cool air from the front of the engine.
Another difference with the Boss 302S is that PCV hoses route to an oil catch can. The PCV line to the JLT intake tube needs to be blocked off. Both passages have to be blocked off on the manifold and the JLT tubing. There’s also no fuel vapor line on the race car, and less vacuum lines.
All finished up. As we just mentioned the Boss 302S doesn’t have a PCV valve in the intake so when installing the Cobra Jet intake, the provision must be blocked off similar to what Steve did with the intake tube. Otherwise, since the Cobra Jet intake manifold bolts right in place of the stock manifold, the installation was pretty easy.
“After tweaking VCT, spark, and air/fuel mixture for the best combo, peak hp increased 64 hp and peak torque increased by 28 lb-ft,” Steve says. However, he goes on to say that in most of the upper rpm range torque actually increased about 50 lb-ft. Those gains are over and beyond what the Boss intake was already providing. These gains are important because David plans on his Boss 302S living in those upper rpm ranges on a regular basis.