Friday, Day Five, theoretically the last day to finish the Golden Star Week To Wicked 1967 Mustang project and we had a lot left to finish 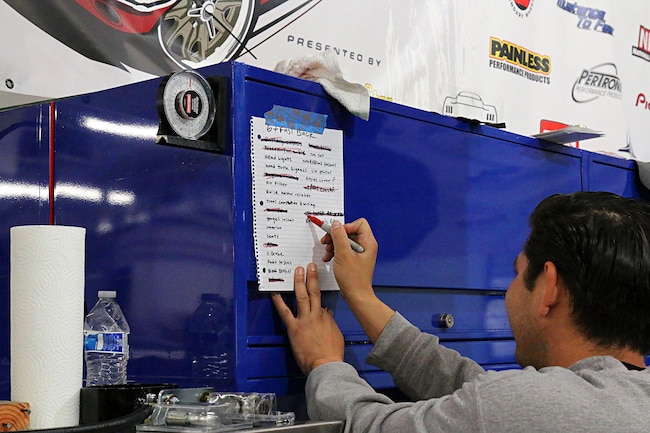 When we left the shop on Thursday night, the Week To Wicked Mustang was looking like it was ready for the road. Or more specifically, the burnout that signals the end of every Week To Wicked. That’s how it looked.

In reality any car build, especially one as complete and ground-up as this one, requires a zillion things to happen that are often not seen on TV, things that are not glamorous and unless you’ve built a car from ground zero you don’t realize are required. Early in the morning, the GForce Engineering driveshaft showed up so we installed that first.

We still had a decent amount of engine wiring to do—the engine harness form Ford is a plug and play deal, but it still needs to be routed cleanly for appearance’s sake so that was first on the task list for today. We got the oil filter adapter from Ford Performance and plumbed that in to remotely mount the oil filter (in stock form, with the integral cooler, it hit the rack & pinion). Then we had to figure out the air intake tube and mass air sensor mounting. Ford changed the Coyote intake setup slightly for 2018 so that the throttle body is pointing upward at a 45-ish-degree angle in front of the engine, causing an air intake tube to sit higher than the hood and hit the radiator. That obviously won’t work so we scratched our heads for a bit trying to figure out how to get a tube under the hood and sealed well enough to not freak out the mass air meter.

While shop manager Jason Scudelleri was engineering the intake tube layout, Christian Arriero was curled up under the dash mounting the transmission controller and finish-wiring the dash getting it ready for the gauge cluster, then lifting the Dakota Digital gauges and cluster into place. Meanwhile, Mark Houlahan was getting the Mustangs To Fear interior panels ready to go by installing Pioneer speakers in the rear side panels and positioning the one-piece headliner, then installing it all. Oh, and we had to install the drive-by-wire throttle pedal from Ford using a Mustangs To Fear adapter.

Finally, we bolted in the ProCar by Scat seats and were finished with the interior and the moment we were all waiting for came (other than the glorious burnout of course)—bolting up the Legendary Wheel LW90s and Falken tires and setting the car on the ground for the very first time.

Once the interior was done, we had to add all the fluids (engine, transmission, rearend, and cooling system), finish bleeding the brakes, make sure all the electrical and fluid connections were tight, and then…..no spark. The Coyote was getting fuel because we could smell it and eventually see it dripping out of the exhaust. After about an hour of troubleshooting and banging heads against the wall, we noticed a connector up by the engine compartment-mounted ECM that that hadn’t been….wait for it….connected. Plugging it in was followed by a bark, then a running engine that settled into a calm idle.

Tidying up some loose ends and easing the Mustang out of the shop and into our parking lot, and we put it in position to do the big smoky burnout. As the cameras were rolling, Jason brought the car up on the converter and…..psych!

You’ll have to come back to watch the full final episode in a couple of weeks to see the full buildup culminating in the burnout. Yeah we know, it’s a cliffhanger. You’ll just have to check back in for the next installment!