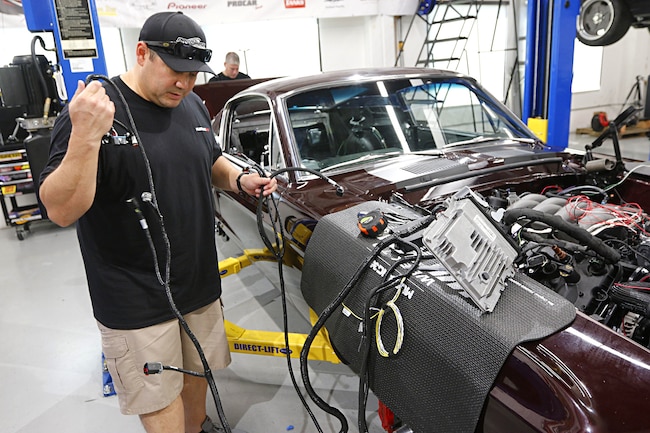 We’re now just past midway on the Golden Star presents Mustang360 Week To Wicked build of our 1967 Mustang fastback, and it’s edging closer to the hour when we perform that first smoky burnout!

Today’s action saw the crew figuring out and installing the shifter cable, Doug’s headers, and the rest of the fuel system underneath the car, then we lowered the hoist and got to work on the topside. First up was installing the Derale and BeCool cooling system—comprised of a BeCool radiator set up by Derale with their twin-fan and shroud setup. The cooling module was a tight fit between the core support and Coyote engine, but with a little brainpower and some elbow grease, it now fits like a glove. Once the radiator and coolant hoses were run, the task of wiring up the engine control computer, fuse box, and wiring harness, plus more of the Painless Wiring engine compartment harness, began. We also made the power steering lines and mounted the factory-look power steering reservoir, installed E3 spark plugs in the engine, began fitting the air intake tube and filter to the engine, and a few more small details that always need to be done with a car build.

While the guys were working on the engine compartment, the rest of the crew was out back installing the turn-mount battery box to hold the Duralast battery (there’s no room for a battery in the engine compartment with that wide Coyote) and test-fitting the Mustangs To Fear Trunk Package, a kit that uses fiberglass panels, wood, and black carpet to beautify the trunk. We say “test fit” because we still need to do some wiring in the trunk and had to make sure our battery box mounting was going to jive with the trunk package. The complete package will go in later in the week.

Watching the two stacks of empty parts boxes getting bigger and bigger gives us all a sense of accomplishment, but we still have a long ways to go until that glorious test drive and burnout. Tomorrow we’ll install the steering column and wheel and start in on the interior using Mustangs To Fear and Scott Drake parts, fabricate the exhaust system aft of the headers, install the Old Air Products heating and air conditioning system, and mount the Legendary Wheels and Falken tires—assuming we don’t encounter any roadblocks in our progress. Then on Friday, we plan to finish the interior, fill all the fluids, fire the engine, and take this baby on a test drive. Then the real fun starts! 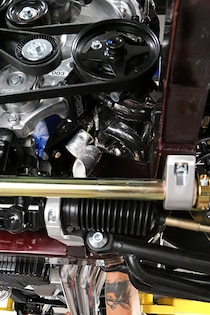 In 1967, the Santa Fe Railroad had a train derailment with 14 Shelby Mustangs on board; this is the story of one of them.