1966 Week To Wicked: Mustangs To Fear 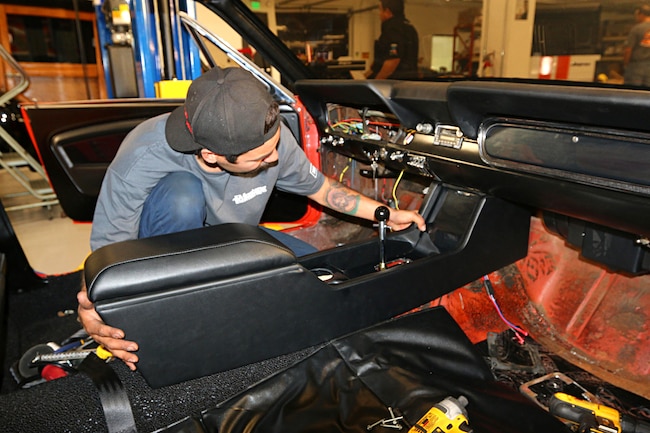 Mustangs To Fear (MTF) was a unique sponsor on our Classic Performance Parts Week To Wicked 1966 Mustang in that they supplied parts for both the outside and the inside. On the outside, MTF supplied a fiberglass lower front valance, upper nose, and hood with Shelby scoop to replace our stock sheetmetal. Superstition Restoration in Mesa, AZ installed the parts prior to paint.

Once back in our Tech Center with the build going full-steam, we installed the interior parts that MTF supplied. The first part was the one-piece headliner, which we now will install in every Mustang we build short of a pure restoration—it’s that cool. The headliner is made of fiberglass with a sierra grain texture and comes in black but can be dyed to whatever interior color you’re going with. It’s easy to install and provides a much-needed 2 ½ inches of headroom. Next up was the 1965-66 Mustang Door Panel Kit that comes with built-in speakers. As MTF says, “These custom doors panels are a must have to help bridge the gap into realizing your restomod dreams. Adding these panels to the interior of your mustang takes the style and appearance of your car to a whole new level. They are available in carbon fiber, grey sterling(ABS) or real brushed aluminum. This comes with a relocation kit for the door handle, door panel cups and clips.”

Finally, we went with MTF’s center console with brushed aluminum trim (not contact paper) and an arm rest with high quality foam that won’t “sink” when you lean on it. Over 115 custom combinations are available with your choice of vinyl or carpet sides, switch type and location, radios, and gauges, and custom embroidery makes this console as aesthetically pleasing as it is functional.

More on our Week to Wicked 1966 Ford Mustang Build!

Going for a drive in Revology Cars’ all-new, officially licensed 1966 Shelby GT350 reproduction is like a trip back to the future.