Installing a full suspension on a 1967 Mustang for ultimate handling 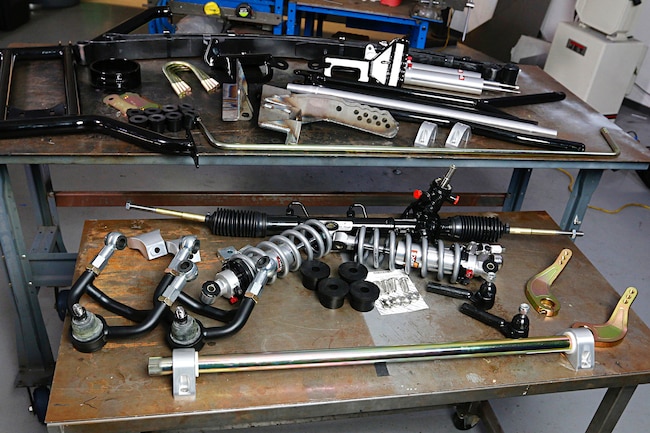 Ride and handling are truly subjective things, like Goldilocks’ choice in beds or porridge. One person’s “harsh” ride is just right for someone else; a car that handles acceptably for Joe Blow feels like driving a semitruck to John Smith. Every driver has their own personal tastes and tolerance for the compromises between ultimate handling and/or ride softness/harshness. Similarly, some guys have no problem breaking out the plasma cutter and cutoff wheel to modify a Mustang, while others wouldn’t dream of changing Ford’s original design one iota. Vive la différence!

As we entered into another Week to Wicked project in July 2018, the plan of attack was to build a 1967 fastback (converted from a hardtop into a fastback with Golden Star parts/PG Customs & Bodies labor) and to power the car with a 2018 Gen 3 5.0L Coyote engine from Ford Performance. That obviously meant we weren’t afraid to cut and heavily modify the car—and that big Coyote engine would mandate it anyway—so we went whole hog when it came to the suspension and chose a Total Control Products full kit, front to back. Yes, it requires TCP’s weld-in front clip that replaces the stock front framerails, making it next to impossible to undo the modifications and return the car to stock, but in this case we didn’t care. We were building a hot street car from a beat-up rust bucket so originality mattered not. The goal was ultimate street/track performance without too much sacrifice in civility, and Total Control’s front clip and coilover suspension combined with their Stage 6 rear suspension would satisfy both goals.

Even if you’re not building a car to the level of our Week to Wicked ’67 fastback, the front TCP coilover and clip will dramatically improve both the ride and handling of an early Mustang. The lightweight, thin-wall factory framerails and sheetmetal stampings are not optimum for strength or integrity. Even in perfect condition, their strength (and geometry) pales in comparison to a dedicated performance clip like that from TCP. And if you’re contemplating a Coyote or mod motor swap (or a big-block), the stock shock towers will make you want to kill the closest living thing the first time you have to work on it—one big advantage to a front clip is the elimination of the shock towers, freeing up space underhood.

Complementing the TCP Front Frame Clip and Suspension kit are five different suspension and steering systems with a bunch of options, but they’re all based on a coilover setup that improves both ride and handling over stock, and rack-and-pinion steering that is far more precise than the early Mustang’s sloppy steering. We ordered the full boogie setup that includes upper and lower control arms, double-adjustable VariShock coilovers, a gun-drilled and splined antiroll bar, a power rack, and Wilwood brakes.

We also got the trick stuff for the rear suspension—TCP’s Stage 6 Torque Arm/Panhard Bar leaf-spring system that uses a torque arm, Panhard bar, new leaf springs, polyurethane bushings and shackle set, aluminum-body shocks, leaf-spring plates, and mounting hardware. Linking the front and rear suspensions are TCP’s subframe connectors and bolt-in center support that nearly turn the car into a full-frame car. While the coupe was undergoing the fastback conversion at PG Customs & Bodies in Texas, we had them weld in the front frame clip and subframe connectors before taking it to our shop in California for the suspension installation.

Once in our shop, we had all hands on deck during the Week to Wicked program and had the entire suspension installed in a day. Of course, that’s on a two-post hoist and with about six people working on it—it’ll take longer if you’re on your back in the garage or driveway.

2. During the fastback conversion at PG Customs & Bodies in Decatur, Texas, we had them cut off the Mustang’s stock front framerails and install the Total Control Products front clip kit and the subframe connectors (not shown here).

3. Here’s an illustrated view of the TCP products we installed—front frame clip, subframe connectors, and center support—that essentially turn the car into a full-frame car.

4. For the full story on what’s involved with installing the TCP front clip setup, check out Mustang-360.com (mustang-360.com/how-to/chassis-suspension/1608-replace-weak-stock-mustang-framerails-with-a-new-front-subframe).

5. Since our car came to us as a bare, painted body shell, we sourced a 9-inch rearend from Currie Enterprises. It uses the new Currie Centurion heavy-duty Ford 9-inch housing, Sportsman nodular iron gear case, 31-spline performance axles, and comes with a choice of gear ratios—we chose 3.73s on a Truetrac differential. The “crate” rearend package comes with brake options, but we were using Wilwood brakes that we already have, so we left that off the list.

6. Here’s a shot of the TCP chassis brace kit installed aft of the front frame clip. The subframe connectors are welded on to the framerails, which is the best idea. This makes the Mustang stiff as a bridge girder.

7. The torque arm attaches to the rearend and also to the center brace, and it transmits axle rotation under acceleration into the chassis, planting the rearend harder for better traction. It helps in straight line acceleration like on the dragstrip and also on corner exit in a handling situation.

8. We had to remove the centersection from the Currie rear in order to install the torque arm bracket. TCP includes this “gauge” to properly locate the brackets; Tech Center Manager Jason Scudellari (right) then welded them in place before reassembling the rear.

10. The Stage 6 kit also includes a Panhard bar, which requires these brackets to be welded to the chassis.

11. The Panhard bar (bare aluminum piece) controls the lateral (side-to-side) movement of the rearend for more stable handling. Leaf springs serve that same function, but not nearly as well—they allow too much movement, whereas the Panhard bar keeps it to an absolute minimum and is adjustable.

12. Christian Arriero, tech center technician, is seen here installing the rod ends in the TCP tubular upper control arms. TCP says, “The most notable feature of our upper control arms is the double-adjustment couplers. Adjustment range is 1 inch, with travel centered at the stock control-arm length. Caster can be varied within a 6-degree range and camber within 5.5 degrees. Alloy-steel rod ends feature low-friction, polymer-bearing races, eliminating deflection and the increasing resistance found with rubber and polyurethane bushings. The arms come with Grade 8 fasteners and shims to compensate for any chassis variances.

13. The upper and lower TCP control arms allow the use of coilover shocks. We went with TCP’s VariShock double-adjustable units (part number VAS 86M21F2) that have 256 combinations of compression and rebound adjustment, allowing the ride and handling combination to be dialed in to the last degree. (Coilovers also allow easy adjustment of ride height.) TCP’s modular shock tower adapter system and spherical-stem assembly provides a choice of stock or lowered ride heights.

14. Part of the TCP front suspension system we went with includes race-and-pinion steering that is light-years better than the Mustang’s stock hydraulic ram-assisted system. TCP’s kit enables correct geometry and a quick ratio. Existing factory mounting locations are used whenever possible to simplify rack installation, and once installed, the rack becomes a rigid crossmember bracing the lower control arm mounts—an improvement over the original bent tubular design. These trick aluminum mounting brackets along with the centerlink are specific to engine type and are used to vary the height of the rack as needed for oil pan clearance.

15. TCP’s gun-drilled and splined antisway bar is full-on race car stuff, and a required option when doing a Coyote swap install in a classic Mustang.

16. The complete Total Control Products front suspension system works with the rear suspension to make our fastback a killer on the street, strip, and open track.

17. To stop the beast and complement the TCP suspension, we went with Wilwood brakes with 6-piston calipers front, 4-piston rear, and 13-inch rotors.

18. The best suspension in the world is worthless without good wheels and tires. We chose Legendary Wheels’ 17x7 and 17x8 LW90s with Gold Haze centers to pop with the Royal Crimson paint. Tires are Falken Azenis RT615Ks—P245/45R17 rear and P225/45R17 front.

19. About to come down off the lift, our Week to Wicked 1967 Mustang, presented by Golden Star Auto Parts, looks amazing. Check back next month for the final reveal!

In 1967, the Santa Fe Railroad had a train derailment with 14 Shelby Mustangs on board; this is the story of one of them.